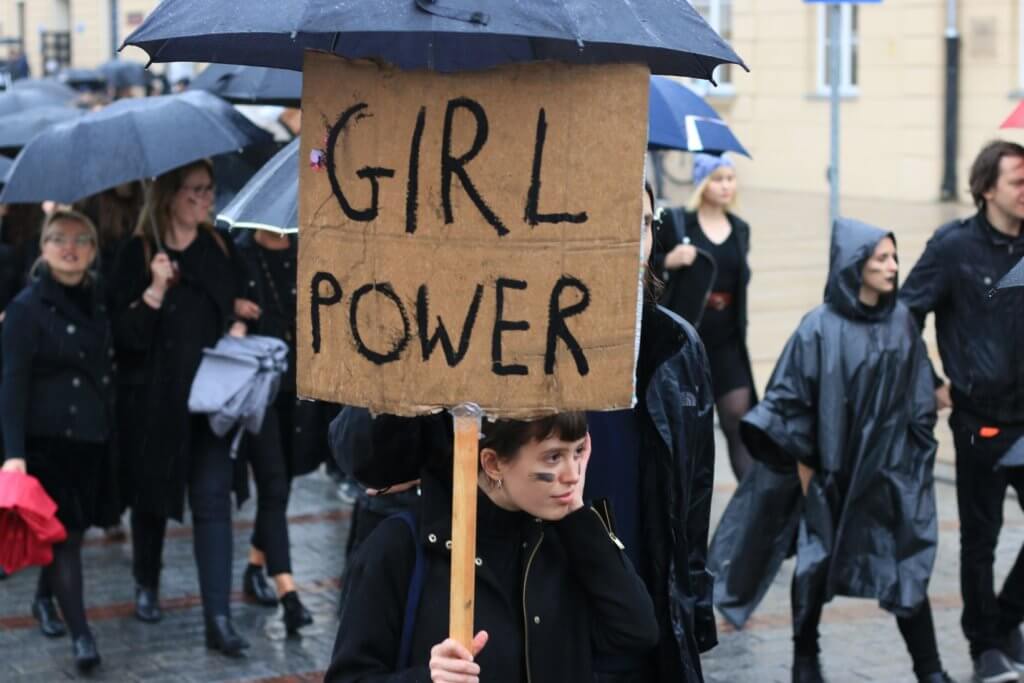 T o the Saturday demo “The jokes are over” I went wearing black with black “gashes” on my cheeks. These are our, women’s, war colors. These gashes have appeared in a video clip Wściekły szpaler (The Enraged Row) recorded in front of the Sejm (the Polish Parliament) as well as at the posters encouraging people to join the Women’s Strike. On Saturday many women had similar war paint on their faces. And on Monday’s Women’s Strike women galore throughout Poland wore these.

Andrzej Leder, a Polish philosopher, once said that it is typical of Poland to keep fighting. In commercials we fight the cold, or we fight against stains on clothes. Better narratives could be created. I agree with Leder. I also prefer a narrative of work and activism. But this time I let myself be captivated by the war narrative. Why? Because work and activism were dumped into the garbage. Sejm did that. The work of hundreds of people collecting signatures under a bill Ratujmy Kobiety (Save Women) initiated by citizens was ignored. The work of social organizations including Federa, Feminoteka, Kongres Kobiet, Ponton and dozens of others struggling for women’s rights for years are being ignored, too. And yes, by principle I’m closer to the narrative by Stanislaw Brzozowski, comprehensively quoted in the circles of the Political Critique, revolving around the motto: “Martyrdom does not replace work”

We are involved in grassroots organizing and we work, and it is not us that wanted to fight. This war has been declared by the Polish State. And we’re going to this war.

On Saturday the protesters chanted: „to nie kompromis, to kompromitacja” (“it’s not a compromise, it’s a disgrace”). I know that a lot of women to have joined the Strike do support the so-called abortion compromise. I respect it. But I know that there are thousands, who are fed up with talking about the compromise.

Those protests wouldn’t have occurred but for the draconian draft law Stop aborcji. (Stop abortion). Those protests wouldn’t have taken place, if Sejm had decided to proceed with the bill “Ratujmy kobiety” and send it for further discussion. What harm would it have done? With the present structure of political forces in the Parliament the draft legislation would have got stuck in the committee for many months and the deputies could reiterate with “clear conscience” that they are working on, discussing and consulting the bill, anyways. They decided otherwise. And thus on Monday, Oct. 3, women went on strike, and this is why more of us turned up on the streets with black marks on their cheeks. Many more. Zamkowy Square appeared to be insufficiently large to squeeze an approximate number of 20-30 thousand participants.

Minister Waszczykowski, when asked about the Women’s Strike, replied: “let them play”. This is not a game – as the demo’s slogan read: “Game Over”.

This not a game, but this is war. The feminists have been repeating over the years: “My body is a battleground” We didn’t want that battle. It is you that started it, dear right-wing politicians. You wanted war, so now you have it. Yes, this is you, the right-wing, that gets excited by the narrative of fighting, martyrdom, suffering, so here you have a fight. You would love some suffering, too, wouldn’t you? But, best of all, if it is women’s suffering. For you it’s a “culture war”, whereas for us, women, it is a struggle for human rights. For you these are “non-issues”, for us it’s the mundane reality of thinking about our body, our family, fertility and future.

It is not women that are against Poland, it is Poland that is against women.

The Sejm Poland, to be precise. Following KOD’s events (Committee for the Protection of Democracy) there comes a time for another rendition of the Poland of the street. Poland of protests. It sometimes has a woman’s face. A face with a tinge of black piss-rage.

On Tuesday evening, before this article was translated, in a surprise meeting, Polish MPs rejected the proposed total ban on abortion. But that doesn’t mean Polish women can stop fighting. In Political Critique we wrote on Monday that this is probably going to happen, as the ruling Law and Justice party is likely to put forward its own abortion law bill, which will be not as draconian as the one that was put under review, but which will nonetheless be stricter than it is now. This will be probably presented as a compromise between Catholic activists and the people protesting on Black Monday, allowing conservatives from Law and Justice to strip women of their reproductive rights while appearing as a moderate and conciliatory party at the same time.