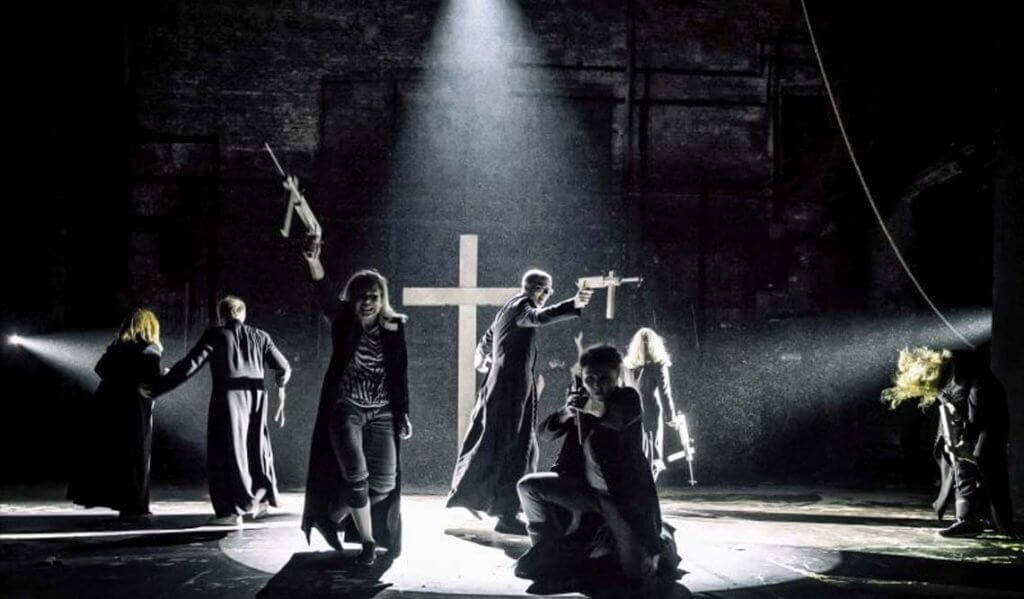 A contemporary Polish play, Curse, directed by Croatian theatre director, Oliver Frljić, which focuses on the Catholic Church’s political power in Poland in the past and present, is being framed by pro-governmental public media as “blasphemous.” State authorities are also getting involved, taking the concept of the play out of context and may try to take the theatre, actors, and director to court for “offending the religious feelings” of Catholic loyalists. Rebekah Switala conducted an interview with Agata Diduszko-Zyglewska, a cultural activist, expert on theatre practice, and journalist about the play and the imagined controversy surrounding it.

Rebekah Switala: Why did Frljić decide to use a 19th century drama as his inspiration for addressing contemporary Polish issues?

Agata Diduszko-Zyglewska: Well, in the original nineteenth century drama, written by Stanisław Wyspiański, a young woman has children with the village priest. A drought then occurs in the village, and the villagers, believing they are being punished by god for the young woman’s sins, burn the children and young woman in a sacrifice to god. But the priest is not punished, so this story also represents the most central, contemporary problems today, which are linked to the power of the Catholic Church, just as problems were back then in Poland. The contemporary Curse doesn’t retell the classic story, but it’s presented as a summary in the beginning of the production. Focus is more on the philosophical standpoint, which is to highlight the hypocrisy of the power of the Catholic Church in state and public affairs. This philosophy is used as a framework filled with scenes that symbolically address contemporary social problems stemming from Church-state hypocrisy, especially the state’s guilt in protecting sex offenders and child abusers in the Church.

In 2001 a case surfaced regarding a priest from a Polish village who was raping girls who were only a few years old. The prosecutor argued that this was fine, and suspended the priest’s prison sentence.

So the state protects criminals who are guilty of paedophilia?

Yes. For example, in 2001, a famous case surfaced regarding a priest from a village called Tylawa who was raping girls who were only a few years old by putting his fingers into their vaginas. It was discovered that he had been abusing girls this way for more than 30 years, but the Chief of the Commission of Justice and Human Rights – who was a prosecutor during the Communist era but is now a conservative hero – ruled in favour of the priest. The priest’s prison sentence was suspended, and instead he was simply moved to a different parish. The prosecutor argued, very publicly, that this priest was an energy therapist, and that these girls were merely receiving a therapeutic treatment. And now this prosecutor is the Chief of the Commission of Human Rights. So this is something very serious and hypocritical, and goes all the way to the Parliament.

Art acting as a social critic has long taken place in Poland, but this is the first time such theatre tradition attacks the Church.

Frljić decided to use theatre as a means of protesting the state’s failure to prosecute the Church’s criminal actions. Is using theatre for protest something unique in Poland?

Art acting as a social critic has long taken place in Poland, especially during communist times. Many dissident theatre groups attacked the communist regime and atrocities happening then. So this theatre tradition is very present in Poland, but not when it involves the Church.

So Curse is exceptional?

Definitely. It openly criticizes the cult of John Paul II and the Church’s paedophilic acts in a way that has never been done before. During Communist times, the Church in Poland was on the “good” side of dissidents, helping them overthrow communism and Russian imperialism. John Paul II did a good job in this area and really helped Poland. He gave the world public attention to our problems. But again, paedophilia in the Church was rampant during John Paul II’s reign, but it has never been addressed in theatre before. So by using a plaster statue of the Pope in the play, a strong symbolism is made that shows how victims of Catholic sex offenders are on his back.

Public media in Poland is attacking the play for depicting “blasphemous” scenes.

They are, but this is taken out of context entirely. The scenes that are being framed as blasphemous – specifically two scenes – are those connected to the Pope, who is symbolized as a plastic figure of John Paul II. In one scene, an actor performs oral sex to an attached plastic phallus on the plaster figure. Of course, it is theatre, so it is not him, it’s just a symbol. The other scene involves the putting on of a label around John Paul II’s neck that states “Defender of Paedophiles,” followed by them putting a noose around his neck, which concludes the scene.

Paedophilia in the Church was rampant during John Paul II’s reign; using a plaster statue of the Pope in the play is thus hugely symbolic of how victims of Catholic sex offenders are on his back.

Why is public media framing them as blasphemic?

Because the Church recently helped the conservatives into power, and the conservatives have responded by giving the Church more space. But this goes back further to when the Church, and especially the Pope, played an important role in assisting Poland in obtaining freedom from Communist rule.  After 1989 the Church said “OK, we helped you obtain freedom. And for that freedom, you will pay a debt.” And this price is giving the Church the supremacy it had before Soviet rule, which it has used, in part, to focus on eliminating women’s rights. They use Pope John Paul II as their “tool”; there is now a strong cult of Pope John Paul II in Poland, with the majority considering him to be the pope of Poland. Many streets, schools, and state institutions are named after him, which makes it nearly impossible to criticize him.

And since the elections, PiS has overtaken the public media. They started to use these strange tools – such as trolls and hate-speech – to hyperbolize emotions and so on. Every week they find a subject to attack and rage against. And this is happening now with Curse; almost no one has seen the performance, so they sent someone to take a fragment of the performance and make it live. They put it not only on the internet, but also on public television, showing it many times. Now there is hate-speech instigated by trolls and conservatives. It’s a horrific act being done to the actors, who are only doing their job, and to the theatre.

Is it possible that the state can try to prosecute the theatre, director, and/or actors under some obscenity law?

There are some articles connected with obscenity in Poland, but not in this case because it was not obscene. Even in the scene dealing with oral sex everyone is in full dress. It’s not sexually charged, it does not show nudity. It’s not shown in a way that is meant to titillate and sexually arouse; it’s really symbolic, sad, and astonishing.

Do you think the state will find another means to try and prosecute?

The prosecuting office has already decided to take it to court because of one particular article of law on blasphemy that was established in the 1990s as a “payment” to the Church for helping the state gain freedom from communism. This law states that anyone who offends the religious feelings of a person can be jailed for up to three years. But the only religious feelings protected by this law are the feelings of the Catholics; my feelings don’t matter, because I’m not Catholic. Of course Orthodox believers or Muslims can also be protected by this law, but they are a micro-minority in Poland, so actually only the Catholic Church stands to benefit. It seems that the prosecutors want to make it a priority to charge the director because he’s responsible for the program.

Another concern of the populist, right-wing publicists is a scene towards the end where an actress gives a monologue that tests the tolerance and boundaries of theatre (what can be done, what cannot be done in theatre). This scene actually refers to a very famous scene from avant-garde German theatre, a performance called “To Kill Helmut Kohl,” which playfully mocks the concept of gathering funds to assassinate Helmut Kohl. In Curse, an actress is given a monologue to discuss how one would contemporarily raise funds to assassinate Kaczyński. The result that is shown is that it is impossible to even ask such a question in theatre, because the criminal code in Poland – which she recites on stage –  states one can be jailed for up to three years for even proposing such an idea. So it’s a very conceptual scene that involves talking about what is false and what is truth; is the actress talking, or is the director? But the pro-government public media is framing the scene as an actual call for raising funds to assassinate Kaczyński, claiming that the entire play is about that. So there is a concern that they may try to prosecute under the criminal code cited in the actress’ monologue, despite the claim being entirely untrue.

What do art circles think about this, and are they doing anything about it?

There is a huge reaction from art circles, people of culture. There’s an open letter, signed by hundreds of people who are very well-known and respected, defending this performance as a very good and important piece of  art. The letter states that art can critique the Church’s power in Poland, it can stand for the victims and survivors of priests and paedophiles, etc. This is the public sphere; the legal sphere is a different thing. The letter stresses that nobody is forced to go to the theatre – watching the performance is an act of will. So Curse doesn’t violate this article.  Before attending a performance in a theatre one must buy a ticket which comes with a brochure – written for adults – that clearly states there are religious and sexual issues and themes present in the play. Viewers are therefore conscious of what they will view. So the fact is that the only person who could be put in court, according to the law, is the person who is guilty of leaking a video film fragment of the performance – taken on his phone – onto the internet. This is the person who really forced people who did not want to see such a performance to see it.

Do you think the state will try to cancel the play?

I suppose so. The city of Warsaw is among one of the cities in Poland that are not in support of the current government. Warsaw’s mayor isn’t a member of the conservative party; she’s from an opposition party. So the PiS is trying to purge officials who don’t agree with the conservative party, and are gathering arguments to help them using a narrative that claims the city of Warsaw is funding some blasphemous performance that offends Holy John Paul II. But again, of course they haven’t seen the performance, so they don’t know what it actually addresses.