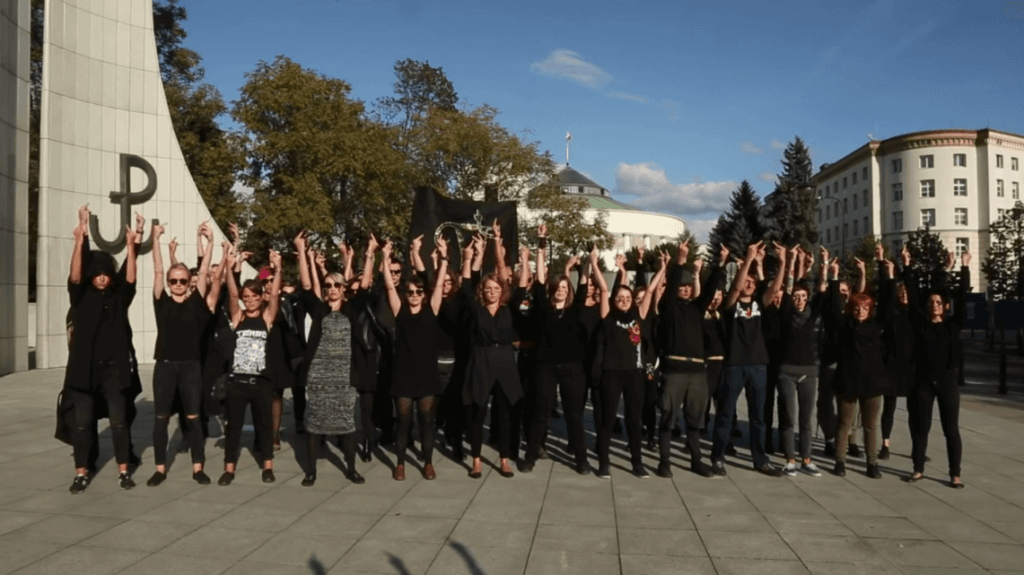 "We apparently do not scream enough..." Protesters singing in front of the Parliament in Warsaw.

The proposed change in legislation regarding abortion had greater effects on education than many imagined. Not only were some universities and schools forced to close, due to losing female employees to the protests, but ten teachers from Zabrze, a city in the Silesia region of Poland, are now being held accountable for supporting the cause.

Ten teachers from the Special School No. 39 are being forced to go through disciplinary hearings in front of the Board of Education in Katowice, for attending work dressed in black, on the day of the first so-called ‘black protest’.

News from the first hearing is a reminder of the events that happened at the end of last year: a big success, on behalf of the opposition. The protests against introducing stricter abortion laws lead to the governing party reconsidering their legislation, and thus, retracting the proposed change. Here is a summary of the events that led to the protests, which, in turn, led to the disciplinary hearings.

Black Protests: How it All Began

The initial change in legislation, which was proposed by the governing Law and Justice party (PiS) on the 23rd of September 2016, sought to completely ban all abortion. This would mean that in cases of incest and rape, victims would be forced to carry the child throughout the entire pregnancy. The implementation of the new legislation could also lead to police investigations around miscarriages. In the case of admittance to hospital, following a miscarriage, the police would be informed in order to determine whether the miscarriage was due to natural causes, or as a result of an attempted ‘abortion’. Should the woman be found guilty, she could be sentenced to up to 5 years in prison.

Under the new legislation, doctors would also be liable for incarceration. Doctors could face up to 3 years in prison, for the unintentional manslaughter of a foetus (i.e., accidentally causing a miscarriage through prenatal examinations), and up to 5 years for carrying out a premeditated abortion.

The first protest against the blanket ban took place on the 3rd of October, seeing as many as 30,000 people on the streets of Warsaw alone. Many women boycotted work and classes in order to attend the protest. Most were dressed in black, symbolic of ‘mourning the death of the women’s rights,’ if the legislation were to be passed. They also carried placards, bearing messages such as “My uterus, my opinion” and “Girls just wanna have FUN-damental rights”.

The protest gained international backing, as women in Berlin, Stockholm and Helsinki also took to the streets, in support of the black protests in Poland.

The controversial ban collapsed on the 6th of October, after senior politicians from PiS backed away from it after a parliamentary committee urged MPs to vote it down. The justice and human rights committee, which reviews proposed legislation, recommended that parliament reject the bill, in light of the protests.

The new proposal would illegalise removing a foetus irreparably damaged.

Another protest erupted on the 24th of October, in response to a new proposal made by Jarosław Kaczyński, leader of PiS. Kaczyński said that his party wants to ensure that even pregnancies involving a child that is “certain to die or very deformed, still end in birth, so that the child can be baptised, buried, have a name”. The new proposal would mean that abortion is still permitted in cases of rape and incest, and where there is health or life in peril. It would, however, illegalise the removing of a foetus that is irreparably damaged.

As a way of showing support to those protesting against the government, both in favour of abortion rights and fundamental women’s rights, ten teachers from the Special School, No. 39 in Zabrze wore all black to work, on the 3rd of October. The women took a photograph together, which was later uploaded onto a private Facebook profile, with the caption “We are not supporters of abortion, but believe the current legislation is fine and that there is no need to change it.”

A male colleague of the women shared the photo on the social network, adding offensive comments, such as “Black may be slimming but it certainly doesn’t add intelligence. The Special School No. 39 is in favour of murdering handicapped children – these women will soon be jobless. This womanly commando protested in favour of the unpunishable murdering of handicapped children”. He also reported the women to the head teacher.

The shared photo caused much controversy online, with some people backing the teachers and others arguing that it is wrong that the teachers themselves are teaching handicapped children, whilst advocating for rights allowing such children to be aborted.

The man was suspended from the school on the 10th of October, but the head teacher, Iwona Waśniewska, assures this has nothing to do with the online mockery of his colleagues.

The man in question has worked at the school for several years, initially as an English teacher, but more recently focusing on early years education. There have been various complaints, over the years, against a male English teacher at the school. One mother of children who attended the school recalls an incident in which, after having filed a complaint, she had a meeting with the teacher in question. During the meeting, she asked him “Do you know what kind of children you are dealing with?”, to which he allegedly replied “I do, and nothing will come of them, so there is no need to get so worked up”.

In wake of the controversy surrounding the school, disciplinary hearings have been issued to the female teachers who supported the protest. So far, only one teacher – Aleksandra Piotrowska – has been found innocent by the Board of Education in Katowice. During the hearing, the committee said that everyone has the right to religion and freedom of speech. However, the committee also brought to attention the fact that in the etiquette of the teaching profession, particular caution and sensitivity should be taken when voicing personal opinions.

The current Minister of Education, Anna Zalewska, pointed out that in the Education Act it is written that taking political action and causing political agitation on school grounds is illegal. MEP of the opposing Civic Platform party (PO), Monika Wielichowska, responded to the comments of conservative Zalewska. “We demand that democracy and freedom are respected, in compliance with the constitution. Why is there fearmongering in Poland, with regards to freedom of speech and publicly voicing one’s views?”

The remaining nine teachers are still awaiting hearings. Katarzyna Jaskulska, one of the nine, said that “being found innocent is not what we are worried about. I’m worried I’m going to lose my job. The authorities now have an excuse to fire me. They’re bringing in educational reforms which are leading to many teachers losing their jobs – we all know who’s going to go first, should the need arise”.

Polls suggest that support for the government is dropping to its lowest level since the elections last year.

Many Polish citizens are beginning to feel frustrated with the current right-wing government. Polls suggest that support for the government is dropping to its lowest level since the elections last year. Public opinion also seems to have shifted as, according to the polls, not only are people calling for an overwhelming opposition to the proposed ban, but also for increasing support for the liberalisation of existing laws. Many are calling for better sex education and easier access to birth control.

A general consensus is arising that the role of the Catholic church is too prevalent in modern day politics, as even Catholic women took part in the black protests. Abortion rights activists laid out a petition in which was a list of demands. “We want to live in a secular society,” said Agata Rybka, a volunteer overseeing the signing of the petition. “Right now, religious issues dominate public discourse and we don’t like it.” Similarly, Dorota Szumilak, a Lutheran, signed the petition, saying she feels discriminated against in a society where the Catholic church interferes with political issues. A friend of hers, Małgorzata Brendel, said the attempts to tighten laws on abortion have prompted her to join a growing number of Poles who are now formally leaving the Catholic church.