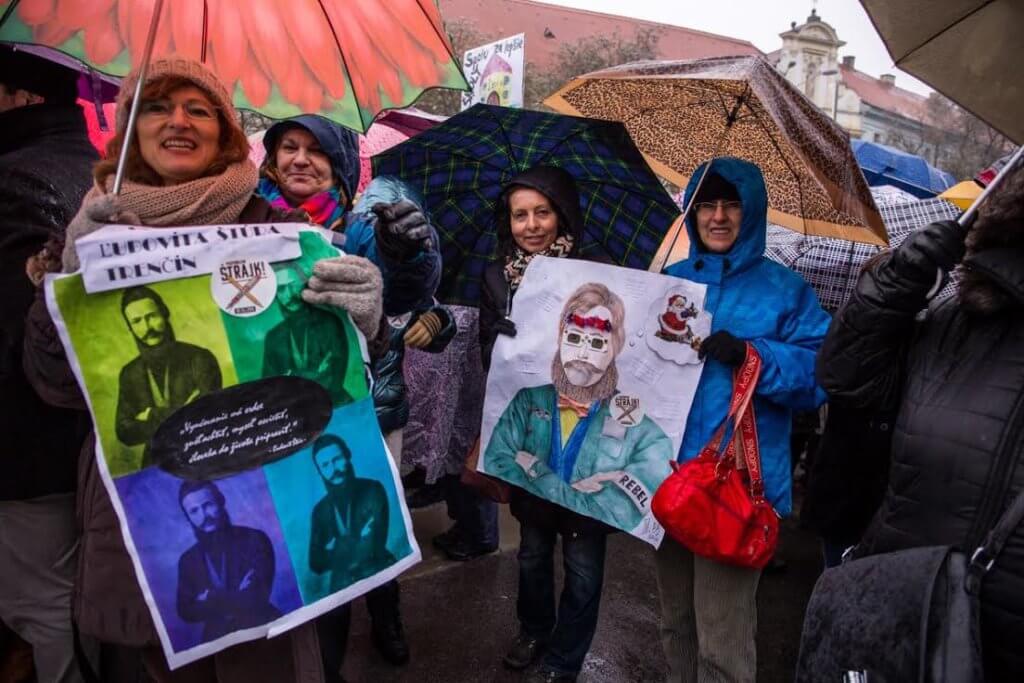 Slovak teachers on strike in February 2016

It has been almost a year since teachers in Slovakia (united by the independent Initiative of Slovak Teachers [ISU]) began to express their dissatisfaction with teachers’ conditions in Slovakia’s education system. Following on from the so-called ‘Babysitting day’ last December, when teachers drew attention to the fact that their salaries amounted to little more than that of a babysitter, and an indefinite strike in January 2016, Slovak teachers have initiated an ‘escalating strike’ beginning in September.

This article will examine the recent responses of politicians towards the teachers’ strike. Prime Minister Robert Fico has criticized the striking teachers. Richard Sulík, the head of the ‘liberal’ party, Freedom and Solidarity (SaS), on the other hand, has supported them. It is worth examining the present motives and past statements about similar conflicts of these two politicians.

Teachers do not bear the sole responsibility for the miserable state of the Slovak education system, as our politicianswould have us believe.

The teachers and their strikes are not beyond criticism. For example, teachers’ participation in the strikes has not matched their rhetoric, and they have not complied with collective bargaining laws. However, it is not my intention to question their constitutional right to strike, nor the right to protest or engage in civil disobedience. In response to the strike, the PM, Fico, observed that teachers had enjoyed their paid holidays and then began their strike when the teaching semester began.  He said that the teacher’s strike was illegal.

Striking is an extreme measure. It is usually done to force an employer into negotiations by means of economic and moral pressure. Therefore, there is clearly no sense in going on strike while students are on holiday. Such a strike would be as ridiculous as Fico’s recent comments. Within the educational system, a strike only has influence during the semester, on days when classes are taught. When teachers, supported by the biggest teachers’ union, went on strike during the PM’s previous term, it was during the schoolyear and the PM made no mention of school holidays. During the right-wing, liberal rule of Radičová, when Fico’s party was in opposition, he even supported the doctors’ mass resignations. It seems that Fico has forgotten his support for collective withdrawal from work while his party was in opposition. Fico’s statement that the teacher’s strike is illegal is wrong. Although the ISU did not comply with law on collective bargaining, only the Constitutional Court is qualified to judge the legitimacy of a strike. Unless the Court decides otherwise, the strike is legal. If the PM has any doubts, he should file a complaint with the Constitutional Court.

That a large proportion of the public should allow itself to be tricked by the politicisation of workplace disputes is of grave concern.

In fact, the PM’s statements are hypocritical. Fico has, previously, criticized other politicians when they tried to stop employees’ strikes by means of the courts. Both the 2003 railway workers’ strike and the 2006 healthcare workers’ strike were suppressed following court decisions apparently made under political pressure from the right-wing government; an intervention which the current PM strongly criticised at the time. On the other hand, it was his party that promoted an effective ban on striking by medical and social services staff in 2013.

However, it is not only Robert Fico who suffers from amnesia. Robert Sulík, the leader of SaS, who has expressed his support for the striking teachers, also made disparaging comments about the 2011 doctors’ strike, alongside stupid comments concerning trade unions, the right to collective bargaining and to industrial action. If it were up to him, there would be no trade unions and no civil initiatives which could announce a strike or negotiate collectively.

It is well-known that hypocritical politicians may change their views on such strikes, protests and civil initiatives based on their whims, whether they are governing or in opposition. However, that a large proportion of the public should allow itself to be tricked by the politicisation of workplace disputes is of grave concern. It is difficult to listen to the large number of people capable of believing media propaganda about the wonderful salaries that teachers, nurses and other workers allegedly receive. It is sadder still to note how politicians abuse citizens’ expressions of discontent.

There is a fundamental question underlying this situation which has not been addressed. Since Slovakia has decided to meet its NATO commitment to allot the agreed GDP quota for defence, with plans to annually increase the amount (and Slovakia in fact increases it), why doesn’t Slovakia also agree to meet other international norms prescribing a specific GDP quota allotted for science, research and education? Why have these budget items not been a priority for any Slovak government, past or present? Slovakia cannot ensure its modern and prosperous future as an assembly workshop of Europe without the development of science, research and education. The future of the country depends on the education of its children and not on the amount of capital invested in tax havens. The foundation of a successful society and economy, and of democracy itself, is a successful, educated and large middle class. This success cannot be achieved by miserable wages across the whole economy or by an education system designed to decay.

I support teachers in their efforts to be fairly remunerated according to their education and performance. While a general improvement of the Slovak education system will not be achieved by simply increasing salaries, such improvement will not be possible without the fair remuneration of teachers (and other workers). On the other hand, it is necessary to note that teachers do not bear the sole responsibility for the miserable state of the Slovak education system, as our politicians (regardless of their political beliefs) would have us believe. Rather, it is a result of the misguided state policies on education which have been promoted by Slovakia’s the political elite since 1989.

If we want to improve this situation, people must not be deceived by the games of politicians. Politicians should be held to account, and forced to practically improve the situation of citizens. It has become a national sport to challenge each other’s education, merits and occupation, a consequence of the jealous discontent provoked by politicians who present nonsensical statistics without explaining either their methodology or their meaning. The philosopher, Peter Takáč, has asked whether: ‘a new era has begun, in which a desperate civil servants and public sector employees, earning 400 EUR net, will be competing with desperate private sector employees and self-employed workers who earn the same amount after paying state contributions?’ Instead of demanding that politicians improve the situation, we have turned on one another, envying each other’s poverty and misery, which suits only the politicians. They have their citizens just where they want them…

***
Ján Košč works in a metallurgical factory and is engaged in the unions as the vice-president of the base organization. While working in the factory he majored in Social work at the University of P.J. Šafárik in Košice. Since 1998 he writes blogs and columns about music, the economy and social issues.

Ján Košč
Ján Košč works in a metallurgical factory and is engaged in the unions as the vice-president of the base organization. While working in the factory he majored in Social work at the University of P.J. Šafárik in Košice. Since 1998 he writes blogs and columns about music, the economy and social issues.
> see other articles <