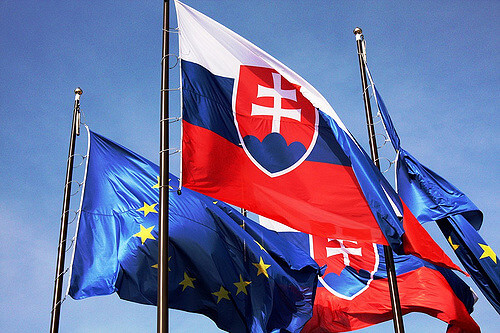 This month, in the midst of both internal and European political turbulence, Slovakia took over the presidency of the Council of the European Union from the Netherlands. The Slovak government will promote one noteworthy policy reform; a European unemployment insurance scheme. This would be a further component of a European fiscal union.

It is refreshing to read the list of priorities of the Slovak government. Though right now it may look like the Slovak government is nothing more than a bunch of thieves protecting one another, occasionally it produces progressive proposals. What began as a temporary solution to the financial crisis in Greece, Ireland and Portugal can eventually turn into a more concrete fiscal union.

There are several elements to a possible fiscal union and it seems that the Slovak presidency will push for a crucial step forward. The first element is the Stability and Growth Pact which requires a balanced budget or low public debt. The second element is the European Stabilization Mechanism (ESM), designed to avert financial crises. If a country cannot repay its debt, and private banks will not lend to it, it may seek support from the ESM. The third element of a fiscal union is the joint guarantee of common debt. This was established, to a certain extent, last year, when the European Central Bank started to buy sovereign bonds to support economic growth (“quantitative easing”).

Fiscal union strengthens solidarity between member states and it is welcome news that the Slovak government is on the progressive side of history.

The fiscal union will only really take off with financial transfers between European countries. We already have structural and regional development funds that finance our highway construction or school repair. However, such transfers are not related to national budget cycles. The new mechanism which the Slovak presidency may promote, with the support of the French and the Italian Finance Ministers, is the European unemployment insurance scheme. This scheme entails a common budget that would be used for fiscal transfers to the unemployed during periods of economic downturn. A sudden increase in the rate of unemployment, and the costs it incurs, would, temporarily, be covered by a common, rather than national, unemployment insurance scheme. If such a proposal for greater integration should pass, after the British have decided to leave the EU, those who lose their jobs in Slovakia, for example, as the result of a sudden economic crisis would be supported by German taxpayers. Similarly, should Finland find itself in a recession, while Slovakia experiences economic growth, Slovakia would support Finland’s unemployed. A similar scheme exists in the USA. During the economic crisis, from 2008 to 2011, federal insurance provided an average support of approximately 0, 4 % of GDP per year to each State. For a citizen of Central and Eastern Europe, fed by the neoliberal propaganda in the mainstream media, the question of moral hazard immediately comes to mind. The empirically unsupported stereotype of the lazy Greek can be countered by the limited duration of such fiscal transfers, and by ensuring that support reaches only those affected by the economic crisis, and not those unemployed as a result of, for example, technological change.

Economic growth is a problem

Overall, fiscal union strengthens solidarity between member states and it is welcome news that the Slovak government is, for once, on the progressive side of history. But one needs to ask, where does this progress lead us? Helping each other in times of crisis is certainly laudable, but the growth imperative of the capitalist system remains the framework for this help. The proposed unemployment insurance scheme is linked to Slovak support of an expansion of the Investment Plan for Europe. The main purpose of the Investment Plan is to invest in the economy in order to secure economic growth. The overall aim of fiscal union is similar; macroeconomic stability that will lead to growth.

Steps towards a varied economy less reliant on consumption, one that could eventually lead to substantial changes, could also be supported by the radical elements among pro-capitalist forces.

The problem is that indefinite growth of the economy is impossible on a finite planet. It is impossible to completely decouple economic growth from environmental conservation. Simply put, the more we grow, the more we destroy the planet. But, it would seem that capitalism cannot function without growth. We even label a fall in GDP an economic crisis. It is true that the Investment Plan is supposed to invest in technological improvement. However, the European Investment Bank, which manages a crucial part of the Investment Plan, hindered Europe’s energy reform between 2013 and 2015 according to a recent report from Bankwatch. But even if this were not the case, the European Investment Bank, and the Investment Plan, have one overriding goal; securing economic growth. So, Slovak support for the expansion of fiscal union is a pleasant surprise within the much more problematic framework of the global capitalist system. One probably should not expect a government dominated by Social Democrats to be engaged in revolutionary struggle. However, steps towards a varied economy less reliant on consumption, one that could eventually lead to substantial changes, could also be supported by the radical elements among such pro-capitalist forces.

This text originally appeared in the daily Pravda and on the blog Pole.

Tomáš Profant is a lecturer at the Faculty of Social and Economic Sciences, Comenius University in Bratislava and a research fellow at the Institute of International Relations in Prague.