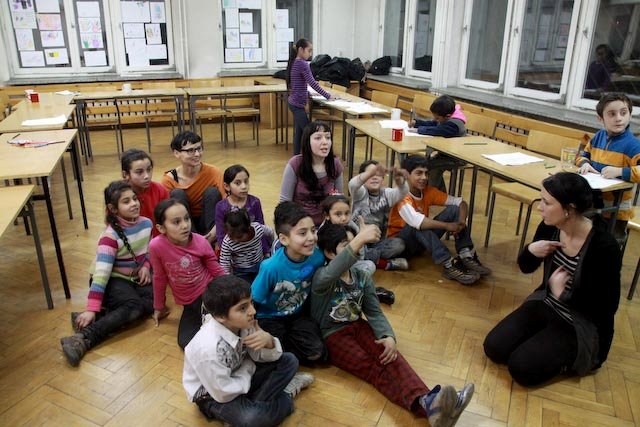 “They [Romani people] don’t really care about [education], the system is too abstract for them.”

“Roma [parents] don’t praise their children, which results in their low self-esteem.”

“It’s the Roma parents themselves… I’ve witnessed how some tell their kids: ‘you will never be anyone anyway’.”

(Some participants in the Teach for Slovakia programme.)

One of the permanent features of the mainstream discussion about the ‘Roma issue’ in Slovakia is attributing responsibility for Roma marginalization and poverty to Roma themselves. Statements blaming the Roma as a group for substandard achievements in the field of education are aired in the media on a daily basis. These discussions have recently resurfaced in the example of claims made by some participants of the Teach for Slovakia programme[1] in Slovak media. Far from being a solitary offshoot, they resonate with widely-shared public assumptions about the (non-)educability of Roma students held by many teachers, educators and other state agents working with marginal groups.

The problem with such statements is that it treats symptoms of wider social marginalisation as causes, blaming individual failures or some innate and essential group traits. These familiar perspectives will be criticised here for two main reasons. First, they are marked by an underlying belief that it is primarily the Roma who bear the lion’s share of responsibility for their difficulties in education and their marginalisation in general. Second, these statements come with a degree of authority assumed by those who have “seen with their own eyes” and who have “spent enough time” with the marginalized Roma to understand them. But have they really?

Although first-hand observation-cum-participation is indeed one of the tools for approaching an understanding of socio-economic marginality – especially its racialised forms – mere observation is not enough.

An educated expert, whether s/he is a political scientist, a manager, or a medical doctor, is not necessarily equipped or skilled to understand and interpret the perspectives and everyday experiences of those experiencing marginalisation. Nor is s/he automatically able to place these experiences and perspectives into the context that underlies them. Even highly-educated individuals frequently interpret their observations through their class, racialised or gendered positions. In addition, their understanding of social reality is determined by their respective educational backgrounds and the assumptions it produces.

A critical component of any meaningful interpretation of observations over a longer period of time (whether ethnographic or through any other discipline) is reflexivity, personal and epistemic, with the main goal being to understand the experiences of the “others” and their social conditions. Without this reflexivity, observation can simply reinforce and strengthen one’s own prejudices. Reflexivity is also crucial for understanding how statements and experiences reflect larger forces, asymmetries, and forms of violence.

One of the consequences of the mainstream discourse on the Roma echoed by  some state and NGOs programmes, is that these prejudices are presented as the collective truth. Generalised, individual stories are judged and interpreted from a position in which the taste and behaviour of the middle classes represents the norm. This is reflected in the verbal judgments passed along by teachers and other professionals working with Roma children when they deem them to be ineducable. In the best cases, a few of those professionals hope that two or three Roma children might be able to escape “their” environment if they make greater efforts and deveop self-discipline.

Some of these experts misleadingly embrace a generalising thesis that conflates the environment and attitudes towards education with the impossibility of social mobility. Their assumptions can be ascertained from their anecdotal references to “non-stimulating family environments”, to putative Romany language “backwardness”, and sometimes to a reliance on racist claims about genetic or cultural inferiority. Little or nothing is said about structural conditions such as miserable housing, lack of clean water and sanitation, lack of health services, the absence of paved roads and the non-existence of public transportation for the Roma inhabitants of some poor settlements.

Nothing is said about the fact that in a neighbourhood with 4,000 inhabitants, the municipality has not, for example, built a single playground. We do not hear about the complicity of state institutions in reproducing these precarious lives through their various disciplinary and punitive policies governing the poor – for instance, how removing individuals from the register of social assistance beneficiaries contributes to the intensification of everyday emergencies and critical events in the “home environment”. These critical events undermine the possibility of continuous education for children and these precarious routines result in frequent interruptions to their school attendance. Additionally, the growing numbers of non-Roma children who are victims of similar structural inequalities are practically invisible in media reports.

Unfortunately, the mainstream discourse on the Roma, however well-intended in principle, which blames individuals and does not pay attention to systemic failures, is instrumental in establishing the collective archetype of “demotivated/-ing” families and individuals who need to be “told”, “instructed “,”kicked”, if they are ever to understand that education will have an effect on their lives.

Constantly talking about undeserving Roma children and their irresponsible parents, or glorification of the exceptional, singular stories of Roma “Obamas” who have studied and succeeded thanks to their individual efforts and persistence – (“Yes s/he can”, if only she wants to) – only contribute to masking the disproportionate and erroneous enrolment of Roma children into “special schools” and the lower-quality teaching they receive there.

A vision of Roma parents without standard jobs who live in appalling conditions but, who nonetheless enthusiastically encourage their children to study in the evenings, while not impossible, is rather illusory, and not only for parents with incomplete or little education. In an environment where even educated Roma have to face daily racism that disqualifies their skills and education, and where equal qualification does not translate into equal opportunities on the “non-Roma” labour market, it is very difficult to nourish some ideal of how education is the key to a better future. This ideal of the individual escape of a capable Roma child is further ruptured when we consider the (flex-)exploitative working conditions and salaries in the jobs currently accessible to Roma. These are largely insufficient for escaping the spiral of poverty.

Project-based initiatives with their efforts, enthusiasm and determination to change things on the ground are certainly laudable, and serve as an example of willingness to make change at local level. Understanding the teachers’ conditions of service in marginalized localities is one of the main preconditions for changing the status quo.

But the problem lies in how some teachers, educators and others involved in various projects explain the causes of the phenomena of poverty and marginalisation that they have encountered in the schools and beyond. An additional problem is the assumption that these types of project-based interventions can solve the structural shortcomings in the educational system in Slovakia.

The marginalization of Roma in Slovakia is rooted in a complex set of political and economic structures, historical legacies, cultural imperatives and inter-ethnic relations. It cannot be overcome at the level of individual solutions or time-limited projects aimed at a certain segment of real life. Foregrounding the successes of individual project-based initiatives, such as Teach For Slovakia, in media reports downplays and makes invisible the desperate need for structural changes in the education system and the hard work of state-employed teachers.

The moralising calls for better education as a guarantee of future employment ignore the everyday realities of most Roma (educated or not), which are marked by racial discrimination, exploitative, precarious jobs, and frequently also persistent poverty. Project-based programmes and individual trainings simply do not offer any sustainable or continuous solutions. This is further evidencedby the ambiguous impact of a range of development projects that have been financed from European funds.

Moreover, taking at face value the statements that have been recorded in interviews or in brief encounters with students’ families is not enough evidence on which to base assessments. These interpretations, while concealing the underlying structural problems associated with material deprivation and discrimination, also rest on moralizing assumptions about the psychological disposition, behaviour, lack of motivation, attitudes and “backwardness” of the poor Roma. These can only contribute to further deepening their marginalization and social exclusion, touching the surface of these visible symptoms without addressing the deeper causes and forces producing and reproducing racialised poverty in Slovakia.

If the Teach For Slovakia participants would like to shape a future of progress, it is crucial that rather than reproducing prejudices and stereotypes, they open up debate about existing structural inequalities in Slovakia.

This article was originally published at openDemocracy.

Barbora Cernusakova, Jan Grill, and Daniel Škobla
Barbora Černušáková is a human rights researcher on countries of East-Central EU. In her work she focuses on discrimination against Roma and the rights of refugees and migrants. As part of her PhD in Sociology at the University of Manchester she is currently doing a long-term ethnographic fieldwork among Roma workers in a city in north-eastern Czech Republic.Jan Grill is a Simon Research Fellow in Social Anthropology at the University of Manchester and also affiliated to the Universidad del Valle. He has researched Roma migration from central eastern Europe to Great Britain, and poverty, race, ethnicity and marginalisation in Slovakia and Czech Republic.Daniel Škobla is a senior researcher at the Institute for Research on Labour and Family in Bratislava. He worked as a Poverty Reduction Officer with the United Nations Development Programme and also provided technical assistance for the Slovak government regarding the Decade of Roma Inclusion 2005-2015 and the EU Framework for National Roma Integration Strategies 2020.
> see other articles <