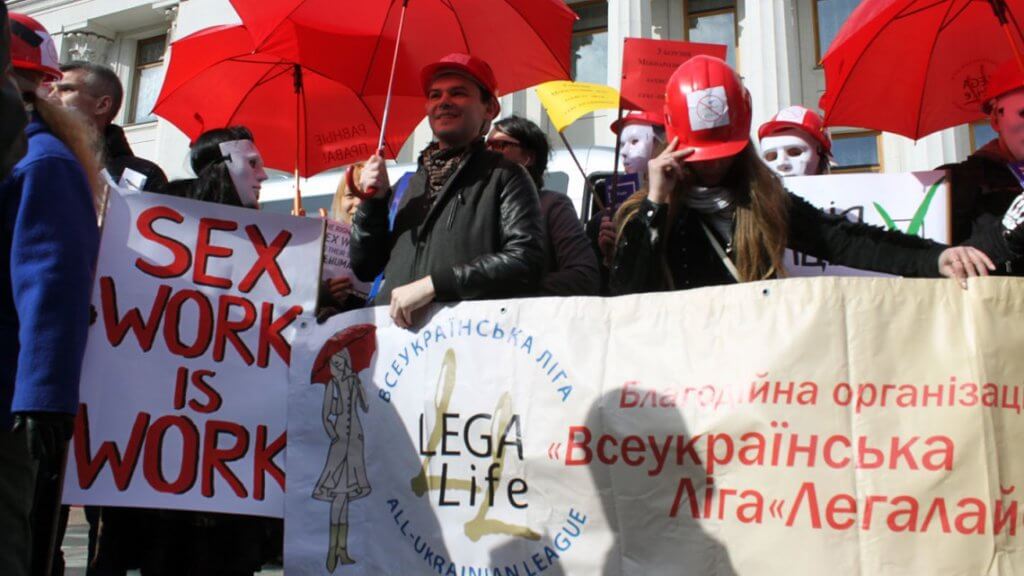 March 3 has been recognized as International Sex Worker’s Day. The day became widely known after 2001, when more than 25,000 sex workers in India assembled to participate in a festival organized by Durbar Mahila Samanwaya Committee, which took place despite the efforts of prohibitionist groups to make authorities revoke their permission to hold the event.

This year, Ukrainians celebrated the day for the first time in history. The All-Ukrainian Legalife League, in participation with the Public Health Alliance, organized a demonstration in Kyiv to march along a route that passes three main governmental buildings in Kyiv: the Parliament, the Cabinet of Ministers, and the President’s Administration. The main demand of protest participants was to decriminalize sex work in Ukraine, or more specifically, to revoke the administrative punishment for prostitution provided in the Article 181-1 of the Administrative Code of Ukraine.

Pavlo Skala, from the Public Health Alliance, was the first participant to arrive to the square in front of the Ukrainian Parliament. He held a rake and a construction helmet so as to demonstrate that sex work is work just as any other, and nothing more. For a while, he was the only participant present at the location and kept promising that the “girls will come shortly. They are blocked in a secret underground passage somewhere under the Verkhovna Raca, because they did not manage to enter Parliament and give the MPs the bill they wrote themselves about decriminalization of prostitution.” 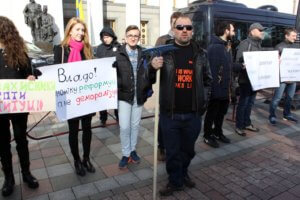 While everyone was waiting for the rest of the protesters who were supposed to become the protagonists of the day, some other groups of people came to the square holding their own banners. Half an hour before the event started, eight young people stood in line next to the building under a slogan, “Save family values.” “We represent a young, recently created organization, the Center for Protecting Society,” stated Oleksandra Horchynska to Political Critique, a girl with a loudspeaker who was one of the participants of this small picket. She continued: “We think that family is the foundation of Ukrainian tradition and culture, and that is why it should be popularized. We demand that the Verkhovna Rada reports about the implementation of the State Targeted Social Program for Supporting the Family, which was approved by the Cabinet of Ministers’ Decree on May 15, 2013. Today, there will be a march for legalizing prostitution here, and that’s why we also came to protect the family. We are against this, we are against prostitution. Because if society is indifferent about this phenomenon now, after it is legalized, people will be encouraged to work in prostitution, and then it will become completely normal for Ukrainian society. We don’t want to have the same thing in Ukraine as in Germany, where they go as far as to offer unemployed women work in a brothel.”* 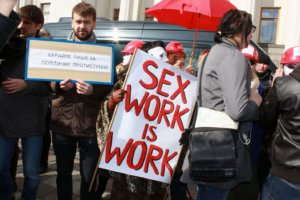 Next to this picket stood another group of women with the slogan, “Feminists against pimps and legalizers.” They also opposed legalization, but, at the same time, supported the revocation of any punishment for women working in the sex industry, instead suggesting that those who profit from and use the services of sex workers are the ones that should be punished.

In addition, there were great numbers of journalists present. In his speech, Pavlo Skala emphasized many times that the demonstrators are in favor of “decriminalization rather than legalization; that’s it, period.” Most reporters did not seem to hear or understand this properly, as they continued to ask nearly every protester if they support legalization of prostitution. In particular, they were interested in knowing if sex workers are ready to pay taxes, what legalized brothels would look like, and sensationalist reporters asked for some tragic story on violence at sex workers’ workplaces. 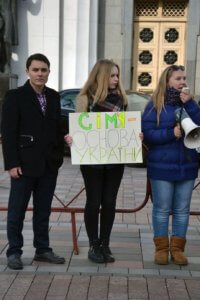 Soon, the “girls” who had been blocked in the underground passage joined the demonstration. After that, Pavlo Skala gave honorific sex worker IDs to all participants in the march. Using these IDs, Skala and another organizer Yulia Dorokhova – a lawyer at the All-Ukrainian Legalife League – tried to enter each of the three government buildings to talk to MPs and public servants and offer their bill. It is worth noting that it was a day off at the Parliament. On the other hand, this fact is arbitrary, because activists did not have any chance to enter the building anyway, due to the immovable police cordon. The same fate awaited organizers next to the Cabinet of Ministers and the President’s Administration. Thus, the protesters did not manage to collect signatures of MPs under their bill, nor did they manage to convince the Parliament to put it in their agenda.

The key slogans of the march included “My work, my choice,” “Sex work is work,” “Taxes instead of fines.” Additionally, sex workers wanted to draw attention to other problems they experience due to their field of work being criminalized: vulnerability to HIV and STDs; substance abuse; physical violence; lack of health care; absolute lack of protection; the inability to choose their clients themselves (just to name a few problems). But at times, the demonstration took political turns, when Pavlo himself and a couple other activists emphasized “political prostitution” and the difference between it and actual prostitution.

Unfortunately, we could not find 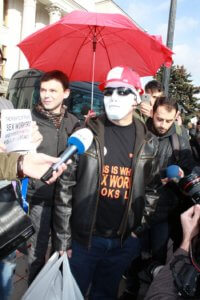 any sex worker whose voice could be heard among the protesters. Each of them claimed they were social workers or members of a certain NGO. At the same time, they assured the press that they were speaking for sex workers who were absent, and with their consent, and that sex workers knew and approved of the demonstration and fight for their rights. Svitlana, a social worker at the organization Convictus Ukraine said, “We are living their lives.” The reason why the direct beneficiaries of the march were not present, according to participants, is that sex workers are afraid to take to the streets, that they do not want publicity because they might encounter problems with their work and families. That is why sex workers, as they said, wore masks on their faces: Masks symbolize the fear they hold about marching and revealing their faces publicly; masks are used as a symbol of social stigma.

Everyone profits from this line of work, including pimps and the police, everyone is involved. Most often, the least protected are the sex workers themselves.

Ihor, who had some experience in sex work in the past, came to the march as a transgender person. In his opinion, “the biggest problem currently faced by sex workers is police violence. Everyone profits from this line of work, including pimps and the police, everyone is involved. Most often, the least protected are the sex workers themselves. They are charged with all the cases of creating conditions for sex work, pimping. The first thing that would change if sex work was legalized is not that we would be accepted in society, but, that we would have the right to health. We are saying that we need to have the opportunity to useall the means available to provide high-quality services. I am talking now about lubricants and so on. The Swedish model changes nothing in relation to sex workers. The key aim is to recognize sex work as work.”

Although the demand of this year’s march was to decriminalize sex work, the organizers and the participants, when asked about legalization, answer, “We will see.” It does seem, however, that legalization is the ultimate goal for them, with decriminalization only being the first step towards achieving it. 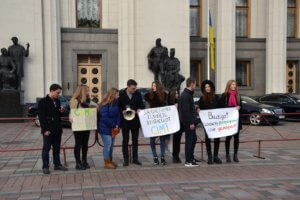 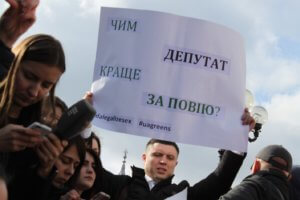 * These words about Germany are not quite true. Please see the analysis of the origin of this claim at one of the well-known sites for debunking fake news and legends.