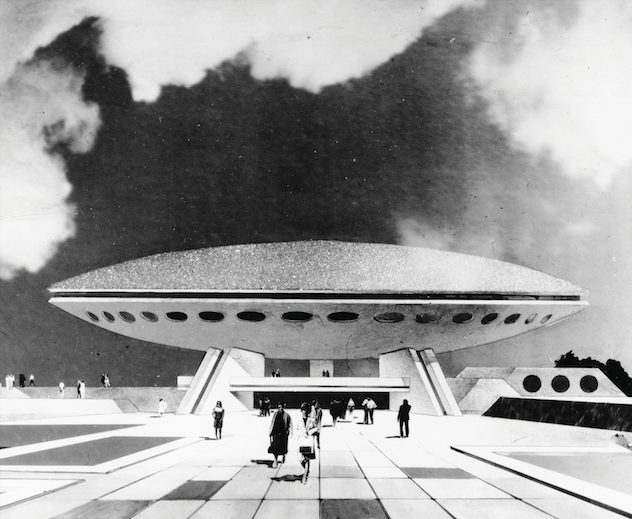 [dropcap]T[/dropcap]he exhibiton Superstructure shows the most outstanding projects of post-war neomodernist architecture in Kyiv and takes place at Visual Culture Research Center from January 28th until February 28th. The exhibition will feature accomplished and unaccomplished projects by the Kyiv architects of 1950-1980s, as well as the transformation of their utopian ideas.

Superstructure is one of the results of a long-term research of the Soviet neomodernism in Ukraine. Materials of this research, initiated by Georg Schoelhammer within the Local Modernities project, were previously presented at the exhibition Soviet Modernism 1955 – 1991: Unknown Stories, curated by Ekaterina Schapiro-Obermair, Katharina Ritter and Alexadnra Wachter at Architekturzentrum Wien (2012); Trespassing Modernities, curated by Ruben Arevshatyan and Georg Schoelhammer at SALT Galata gallery, Istanbul (2013), and Parallel Modernities at the 31st São Paulo Biennial (2014). Superstructure will present this research with a focus on Kyiv for the first time.

Central to the exhibition is the architect Eduard Bilsky, who is an author and co-author of numerous significant neomodernist projects in Kyiv, including the Palace of Pioneers, Central Bus Station, residential district Vynogradar etc. His sketches, drawings, and project materials show the scale of utopian thinking of Kyiv architects. Works by the architect Florian Yuriyev (author of the famous ‘Kyiv saucer’ building) serve as an example of “synthesis of arts” in architecture. The tragic history of the Park of Memory by Ada Rybachuk and Volodymyr Melnychenko will be represented in the film The Wall by Israel Goldstein. Besides, projects by Mykhaylo Budylovsky, Anatoliy Dobrovolsky, Yosyp Karakis, Avraam Miletsky, Nataliya Chmutina, Volodymyr Shevchenko, Valentyn Shtolko, and others, will be presented at the exhibition.

In the early 1960s Kyiv architecture started speaking an international language of post-war neo-modernism. The community of architects, artists, and engineers, for whom architecture and construction were one of the many elements of modernist thinking, were in the vanguard of this process. Architects claimed the role of the demiurges, who create total works of art, and artists aspired for being equal co-authors of architectural projects. It was an attempt to transform the city into the environment for materialization of artistic thinking – in contrast to the strict unification of city space by typical construction and residential blocks. [From the curatorial statement]

Exhibition takes place within the frameworks of Unrendered Spaces project supported by: