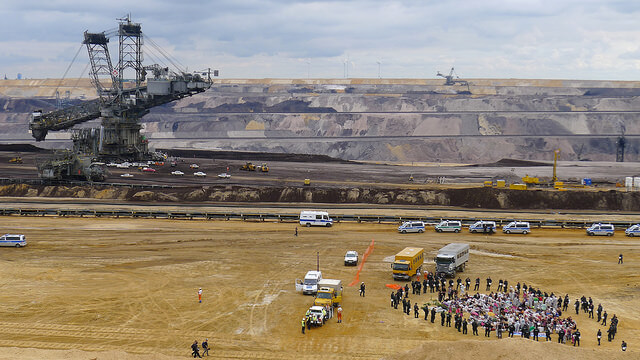 This February was the hottest in recorded history, scorching crops and flooding homes all across the planet. Record-breaking temperatures have robbed the Arctic of its winter.

And yet despite this, governments around the world still plan to build massive new coal mines and open new oil and gas fields.

But everywhere they do, something remarkable is happening: resistance. For example, check out this video of what’s happening today in Pau, France where hundreds of ordinary citizens are still blockading an offshore oil drilling summit being held by Total. And this May, more people than ever will be joining hands to step up that fight on the front lines.

This May, from the oil and gas fields of Nigeria and fossil fuels related endeavors in Brazil to the coal fields of Germany, the UK and Australia, over 21,000 of us have already made our intentions clear: we intend to keep coal, oil and gas in the ground, and are willing to put our bodies on the line to do it. That’s what Break Free is about: escalating the global fight to keep fossil fuels underground and accelerate the just transition to the renewable energy economy we know is possible.

In Germany, from 13-16 May, Ende Gelände is coordinating a mass action to shut down an iconic coal mine in Lusatia (near the German/Polish border). Click here to find out more and take part.

The good news is that the transition to renewable energy is coming sooner and faster than anyone thought. 90% of the new electricity generation installed last year was renewable and new studies out last week show the coal industry in Europe is in terminal decline.

But the real reason I see for hope is in the resistance to fossil fuels that is growing everywhere this industry turns. Break Free will be one of those moments that you will remember, and if you can find a way to join in the action in Germany from 13-16 May, you will be a part of something special.

It’s likely that this fight is the biggest humanity will ever face. It may look like the odds are stacked against us, but no fight worth fighting has ever been easy.

350.org is building a global climate movement. You can connect with us on Facebook, follow us on Twitter, and become a sustaining donor to keep this movement strong and growing.