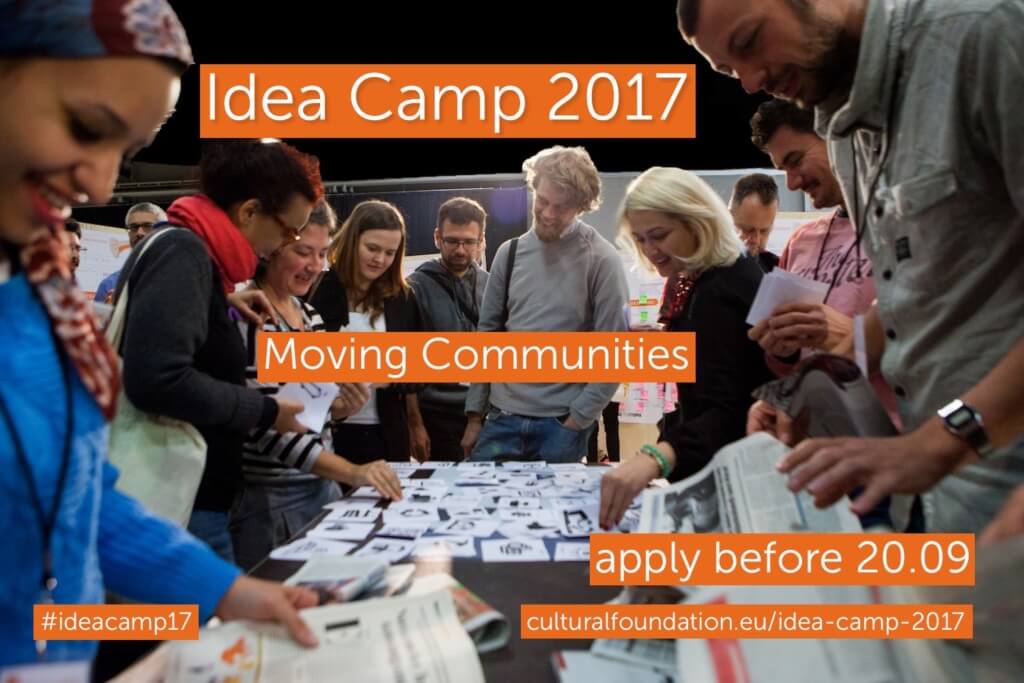 ECF’s Idea Camp is a three-day collaborative working platform organised within the framework of Connected Action for the Commons, a network and action research programme led by ECF together with six cultural organisations from across Europe.

ECF believes in bold alternatives provided by citizens through their local cultural initiatives. At this time of transition, ECF invests in these local initiatives to help them to become enduring solutions to the challenges facing our continent. Europe as a shifting ‘home’ of changing communities – where people can live together in solidarity, accepting their differences – is an urgent priority in ECF’s focus over the coming years.

We are living and working in an increasingly complex environment. Across Europe and its neighbouring countries, more and more people are confronted with discrimination and exclusion on a daily basis – whether economically, politically or culturally. As a result, societies are becoming more and more fragmented, extremism is on the rise, and the divisions between people – and between individuals and institutions – are growing ever wider.

Migration, distrust towards traditional institutions and the widening gap between the idea of a democratic Europe and the reality of a divided continent are among the biggest challenges that we are facing at present. These challenges are not new, but they have reached a degree that directly affects existing systems and policies, both at national and European levels.

Co-hosted by Platoniq, the Idea Camp will take place in Spain from 1 to 3 March 2017 and will bring together 50 participants whose emerging, groundbreaking ideas demonstrate a firm desire to contribute to fostering political imagination, building bridges and effectively contributing to the development of a society with a stronger sense of social justice. Based on the values of sharing, inclusion and openness, the Idea Camp offers Idea Makers a unique opportunity to meet peers from diverse backgrounds and with different visions from across Europe and its neighbouring countries.

Please submit an idea that fosters the Europe we believe in: a Europe of solidarity and openness shaped and nurtured by people

We invite you to apply for Idea Camp 2017 with an idea that:

We invite you to carefully read the application guidelines before submitting your idea. If you have any questions, we are hosting two online Q&A sessions on 6 July and on 7 September, both from 12:00 to 13:00 CET, on Facebook and Twitter. You can join us there.

Following the Call for Ideas, 50 participants will be selected according to the guidelines. ECF will cover travel costs and all expenses related to the stay in Spain during the Idea Camp for a maximum of one representative for each idea.

After the Idea Camp, participants will be invited to submit a concrete plan for further research or investigation of their ideas. A total of 25 proposals will be selected and consequently awarded an R&D Grant, up to a maximum of €10,000 each.