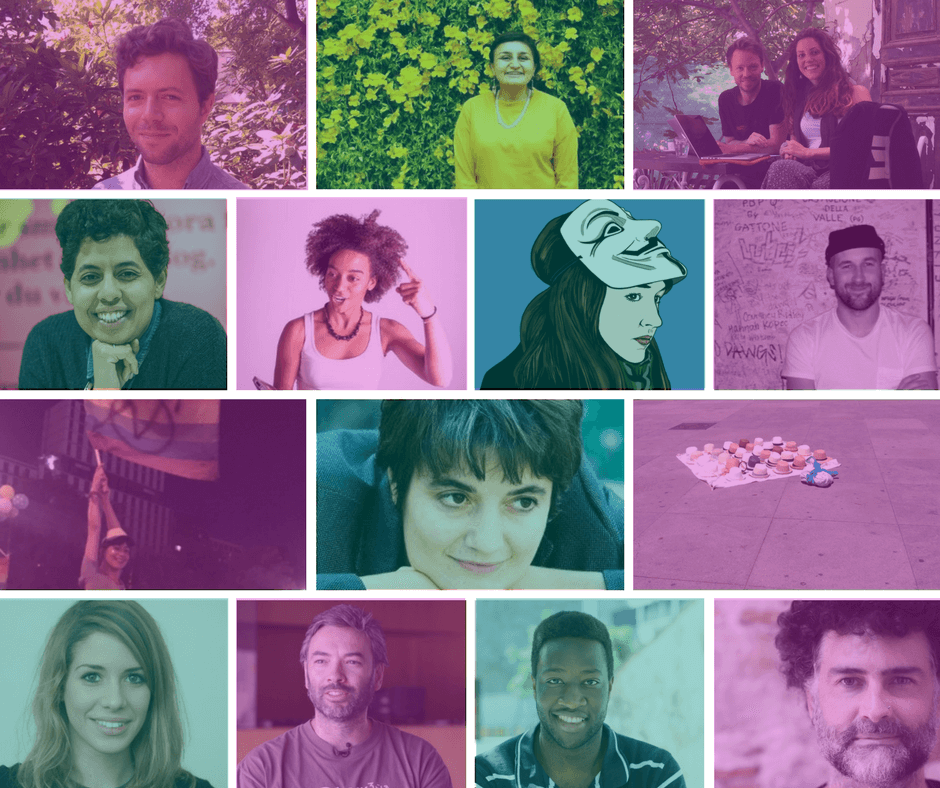 TRANSEUROPA arrives in Madrid with a myriad of alternatives for a Europe in crisis.

Migration and borders, municipalism and the commons are the axes of a Festival of art and politics that invites dialogue and participation

European Alternatives’ (EA) Biennial Festival celebrates its 10th anniversary from October 25th to the 29th with the ‘Convergent Spaces’ proposal in Matadero Madrid, Medialab Prado, Intermediae, CS La Ingobernable and Centro Centro. TRANSEUROPA proposes a series of conferences, workshops, artistic exhibitions, performances, screenings, concerts and political debates. The thematic axes of this edition address the crisis of European borders, proposes the new municipalism in European cities as a potential agent of change and the commons as a political alternative for new governance. 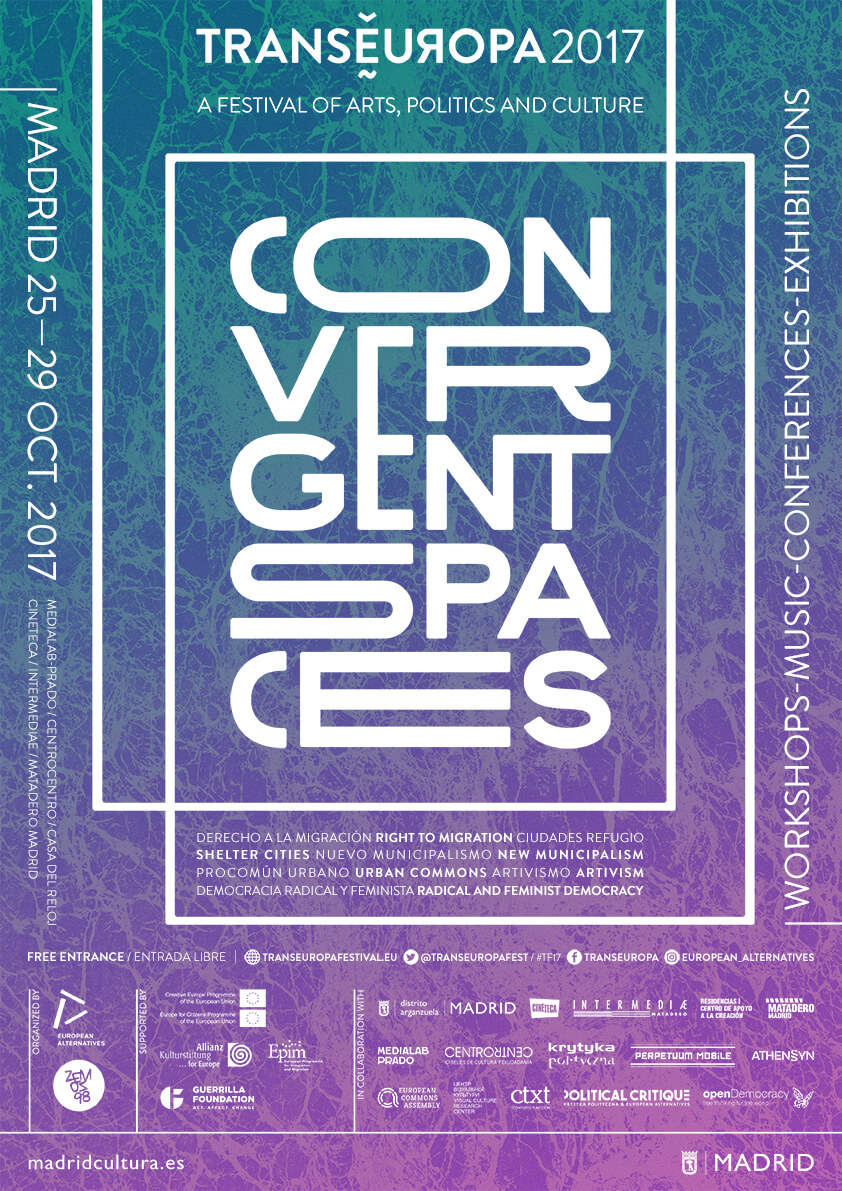 Organised by EA in collaboration with the Spanish collective Zemos98, the Festival is a counterbalance to the dominant discourses of crisis and threat of the unknown. Through art, culture and innovative practices, TRANSEUROPA proposes spaces for dialogue and learning for hundreds of activists from different European countries for an exchange with local citizens.

Over five days more than 50 speakers will participate in TRANSEUROPA. Among them, the anthropologist Arjun Appadurai, the philosopher Marina Garcés, Santiago Alba Rico, the Black Lives Matter activist in Denmark, Bwalya Sørensen, and the German Politician Gesine Schwan. German film director Jakob Preuss will present his new film When Paul Came Over the Sea on Thursday 26 at 7 pm at the Cineteca de Matadero, a documentary about the story of Paul’s journey, a migrant from Cameroon who passed through Spain before arriving to Berlin.

In the framework of TRANSEUROPA Matadero Madrid will host the exhibitions Europe as a Refuge and Artivism from the European Margins. Both exhibitions will open in the presence of the artists on Wednesday 25th and Thursday 26th October respectively.

In addition on Friday 27th Audiovisual Source Code will present If I were a black person in a film, by the journalist and president of SOS Racism Moha Gerehou, the live audiovisual performance IDRISSA: Everyday Borders by Metromuster with the Guinean singer Nakany Kanté and a DJ by MotoKiatu, mixing African rhythms with electronic music.

Each morning 15 practical workshops will take place, addressing issues of integration and borders (Brexit: building trans-European perspectives or Community Strategies against institutional racism); racism (Top-manta: fight and activism of street sellers in Spain or Stop Islamophobia); feminism, data analysis and visualization, and cybersecurity. Collaborators for these workshops include: Carmen Castro, the collective Eutropian, and Stanislaw Strasburger.

Since 2007, TRANSEUROPA has evolved as an artistic, cultural and political festival organized transnationally by European Alternatives. EA is a civil society organization works through its pan-European network throughout the continent to promote culture, equity and democracy beyond the nation state. For the last decade, TRANSEUROPA has operated in a decentralized way, organizing simultaneous meetings in dozens of European cities in parallel to a major festival in a major city. This year, in addition to Madrid, the festival will be present through the TRANSEUROPA OPEN programme in Valencia, Lousame (Coruña), London, Belgrade, Berlin, Montenegro, Ghent (Belgium), Ludwigshafen (Germany), Maribor (Slovenia), Turku (Finland). 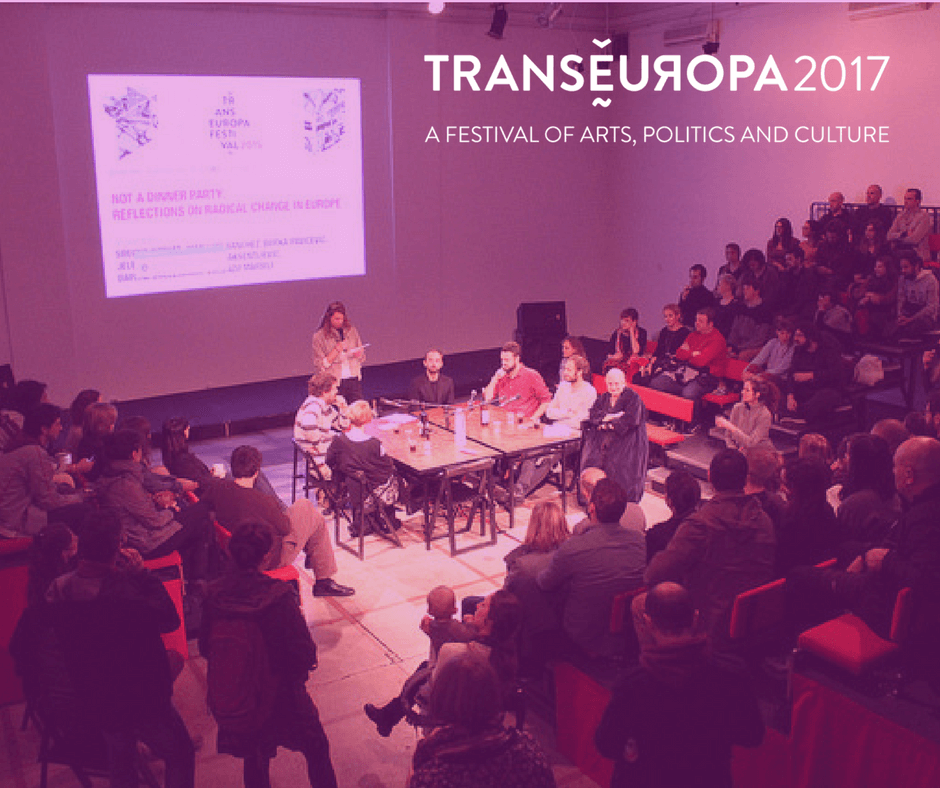