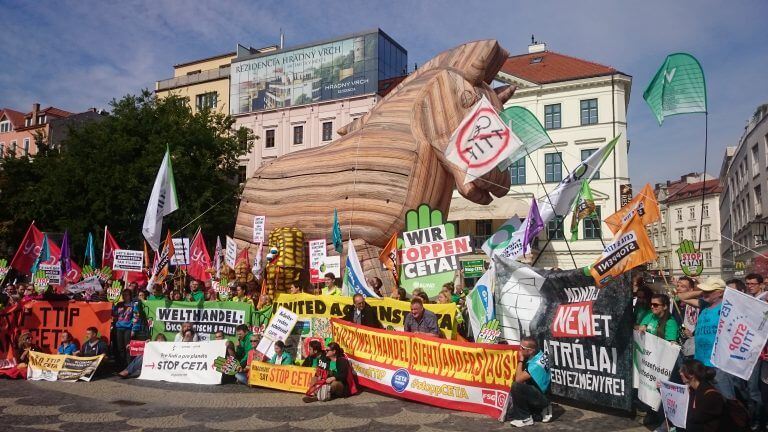 If the CETA negotiations have shown anything about Slovak foreign political thought it is that there is no independent line of policy in Slovakia, and that important questions and legitimate concerns of Slovaks and Europeans alike are kept off the public agenda.

Unsurprisingly, the political and media establishment has been positive about signing the CETA agreement. As is often the case, due to financial constraints and other problems linked to the deterioration of the quality of broadcasting in general, there were no independent media reports or investigations made into the CETA agreement.

Therefore, all the major news agencies have published a piece or two on the purported benefits of the agreement, without questioning the evidence for such claims, where they come from, whether any independent analysis was made regarding the content of the agreement. All the positive PR of the pro-CETA establishment was taken at face value. The critics received only a short paragraph and generally focused on  marginal issues, usually only quoting a Greenpeace representative that the agreement ”will not survive the democratic and legal control of the ratification process“. Truly the main problem of the CETA agreement!

Rarely, a serious criticism was voiced, usually a single sentence claiming that, according to Greenpeace, CETA provides too many powers to transnational corporations at the expense of consumers. One left-leaning daily used the term “controversial agreement“ in their title, at least suggesting that there may be more to the content of the agreement than just the overtly positive added value that everybody talks about.

“Let‘s be happy that we have a progressive and good agreement with the commercial sector, an agreement that can serve as an example to the rest of the world“, these were the words of Fico, social democrat prime minister, as to the value of CETA. He went on to emphasize the smooth atmosphere of the negotiations, thus proving that CETA is a huge success. “Europe proved that it is not an old lady, but a progressive group of states that holds an important place in creating global policies,“ seconded the minister of Economy, Žiga. Beyond the usual praise with no content or meaning, the news also quoted commissioner Malström: “These discussions were extremely useful, everybody could see that we can listen to each other.“

Such a shallow discussion proves just how far away from global developments the Slovak political and media sphere is. Either it reports on some rudimental EU legislation designed to increase consumer protection, such as legal provisions about the size and shapes of bananas, and vilifies its impact; or, when it comes to truly important economic questions such as CETA, it is taken for granted without a single concern raised. Despite CETA being signed by the current SMER-SD headed government, hated by the right-wing press, there was no criticism voiced, as the right-wing press wholeheartedly embraces the neoliberal ideas of CETA.

The CETA debate is also symbolic of the state of the media in Slovakia: they are either too underfinanced to ensure enough resources and enough quality is invested in important topics, they follow the business interests of the owners, or they simply regress to the stage where they can‘t discern important issues from the less important and focus on petty, domestic but better-selling issues than on European issues of global significance.

It seems that, politically, Slovakia is fading away from the global map, if it has ever been there.

Wallonian “NO“ stirs the debate

The short period of time when Wallonia almost blocked the agreement entirely shook up the calm waters of the Slovak media scene; the press agencies covered the topic in a completely different manner. One of the two main press agencies, TASR, went so far as to explain, reason by reason, the Wallonian NO vote. Real concerns were brought into the daylight and questions were asked about the particular impacts of particular provisions to Belgian society and business.

Other news media followed suit, and a number of articles discussed the dangers of CETA setting up international arbitrages where transnational corporations can sue individual states, should they enact laws that could endanger corporate profits (what an abhorrent provision in the first place!) The danger to the environment, consumer protection standards and to the agricultural output of Wallonia were discussed, as well as the little time and secretiveness of the drafting and negotiations procedures. Nevertheless, nobody, literally nobody, raised the crucial and key question: in light of the Wallonian NO, should we start looking for evidence about CETA’s real effect on Slovakia and the EU?