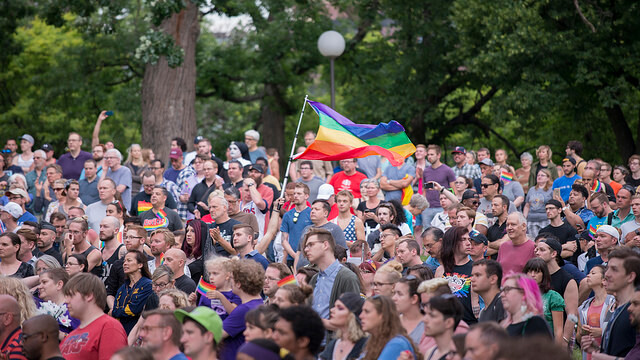 One week prior to the shootings, Omar Mateen legally purchased two guns and at dawn on Sunday he drove 200 km to Orlando, Florida, entered a gay club and opened fire. The United States is mourning the largest mass shooting in their modern history, which left 50 predominantly young LGBT Latinos dead and 53 more injured.

How many of us do not have gay friends who have become victims of violence at some point in their lives? I have such friends. One was attacked and beaten up out on the street and it took several surgeries to re-assemble his face. Another was tracked down by neo-Nazis and was attacked in front of his own home.

The media repeatedly covers stories of Pride participants who are insulted and attacked on the streets of Budapest. We have heard about a gay couple who were chased out of a shop with a baseball bat. We know of a Budapest movie theater that was attacked by neo-Nazi hooligans because it hosted the opening ceremony of the Pride festival a couple of years ago. We know of the bomb threat at the most popular gay club in the Hungarian capital. We know of Russian gays humiliated and abused by pro-government vigilantes, and also of Serbian neo-Nazis crushing the Belgrade Pride; the list of examples is endless.

The massacre is not only a reminder but also a logical extreme of a widespread social phenomenon: homophobia.

The cases which never become known are even more tragic. Violent hate crimes are committed in the countryside against innocent people who can never talk about their experiences. Some have even been abused by the police, who are supposed to protect them. Lesbian, gay and transgender people are abused by their own families or are chased away from home to experience hunger, misery and more abuse. These are the tragedies, which we know nothing about, because they happen with the complicity of society, while the state, which is supposed to offer protection to all of its citizens without exception, fails to fulfill its role.

The mass shooting that occurred last Sunday in Florida reminds us of all these individual and collective dramas. The massacre is not only a reminder but also a logical extreme of a widespread social phenomenon: homophobia.

The threat of physical violence is an everyday experience for large number of lesbian, gay bisexual and transgender people worldwide, in the same way as stigmatization, exclusion and other forms of symbolic violence are. This is the symptom of a social order that transcends national and cultural boundaries – a social order in which heterosexual males can pretend the right to dispose – even violently – of women’s entire beings as well as the right to enforce the compliance of everybody (e.g. women, LGBT people) to the social norms of gender hierarchy. This hierarchy and the norms of masculinity and femininity are maintained not only by raw violence, but also by socially sanctioned roles, taboos and norms – in any case, there is no escape for anybody. Within this social order, taboo, stigmatization, exclusion, abuse and violence are degrees of the same continuum.

The parents of the Orlando shooter, a 29-old male of Afghan descent, who was born in New York, claimed that their son was not particularly religious, but was outraged by the sight of two men kissing. His ex-wife also confirmed that during their short-lived marriage her spouse did not display a keen interest in religion, but he was very abusive, beating her several times.

Similarly to the murderer who became known as the Olympic Park Bomber, who attacked both lesbian bars and abortion clinics, the Orlando shooter was also a perpetrator of violence against women and of homophobic hate crime. The two men are connected by another aspect: both of them put a religious label on their deeds, one referred to Christianity, the other to Islam.

Obviously a tragedy of this magnitude cannot happen without the gun control regime (or lack thereof) which is characteristic to the US. This is a regime in which anybody can purchase a firearm with ease. In the case of Omar Mateen the FBI was aware of his violent past and investigated him for possible ties with Islamist networks, nevertheless he had a license to carry a gun. Despite every statistical data showing the causality between this gun regime and the occurrence of massacres, the US Right wing does not even want to hear about tightening gun control rules. The same Republican senator whose “thoughts and prayers” are with the shooting victims and their families received a $1.3 million donation from the gun lobby to block legislation that would prevent similar massacres in the future.

Without the social reality in which being queer is a transgression, worthy of contempt and exclusion (because it does not comply to the hierarchical order of gender roles), Omar Mateen would not have felt justified to perpetrate his crimes. Without this social reality, the often aggressive and violent backlash through which Conservatives try to nullify the progress of gender and LGBT equality would not be comprehensible.

Violence and its different shades are organic parts of the life of gay, lesbian, bisexual and transgender people.

In the same manner that sexual assault would not exist without everyday sexism, hate crimes like the Orlando shooting would not exist without everyday homophobia. The fact that after the shooting, sexually active gay men could not donate blood to their peers because of a homophobic regulation that was declared by the American Medical Association to be discriminatory and without scientific basis, and the fact of mass killing of LGBT people are the two extremes of the same continuum.

Violence and its different shades are organic parts of the life of gay, lesbian, bisexual and transgender people. The Orlando shooting reminds us that we have to fight against everyday forms of symbolic and physical abuse, if we want to prevent similar bloodshed from occurring and if we want to guarantee the safety and dignity of our peers, relatives, neighbors and friends. It also warns us that responsibility belongs not only to the individual perpetrator(s), but also to those who, while expressing compassion and grief, enable bloodshed to be easier to be carried out than donating blood.