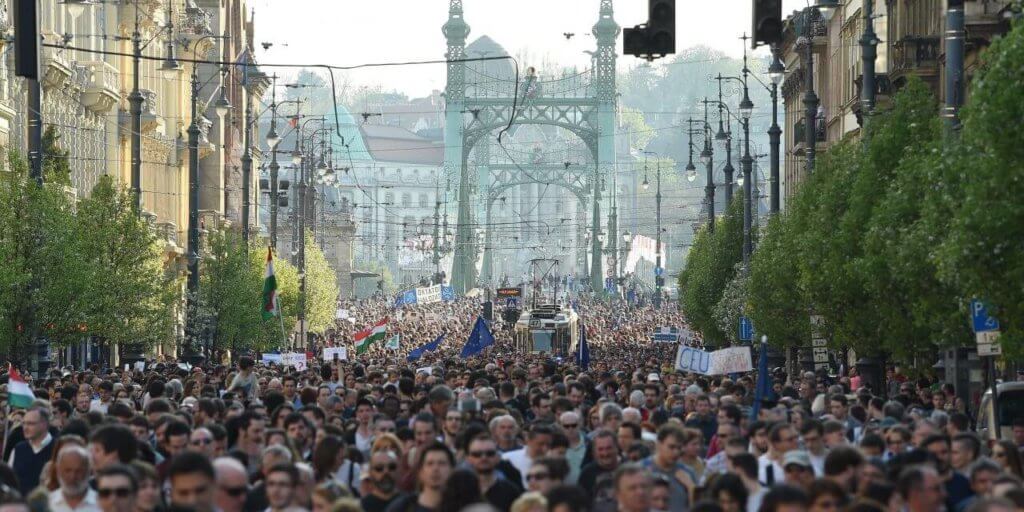 The Hungarian Parliament approved a legislative bill requiring foreign universities outside the EU from awarding Hungarian diplomas without an agreement between national governments, in addition to now demanding that all foreign universities in Hungary have a campus both in the capital and their home countries. Because Central European University (CEU) has only one campus, located in Budapest, and is both a U.S. and Hungarian accredited institution, the bill impacts CEU the most: As of 1 January, 2018, CEU will no longer be permitted to enroll new students, unless CEU opens a new campus in the U.S. or an agreement is reached between the U.S. Government, the state of New York, and Hungary’s Orbán government before the end of September.

The government claims the law is designed to address the administrative shortcomings of foreign universities, but due to the bill being approved amidst a chorus of anti-CEU statements made by government officials and pro-governmental websites and magazines signals to the bill being more of a political and nationalist move. As Szilárd István Pap has stressed: “The government is trying to use the special, formally binational character of the university to push it outside the law, and pave the way for its closing: based in Budapest, CEU is both a U.S. and a Hungarian accredited institution.”

After the law was passed by Parliament, thousands of CEU students, staff, and alumni took to the streets of Budapest on Sunday in protest, wearing badges that read catchphrases like “#IstandwithCEU,” and chanting slogans such as “What do we want? Academic freedom!”

Political Critique asked Attila Kálmán from Kettos Merce for a comment on the situation. His response:

It took only one day for the Hungarian government to accomplish the closure of CEU, one of the top Hungarian universities, a success for the country as well as the region. Members of the Fidesz Party insistently mask their reasons for demanding the closure within legal and bureaucratic jargon. But what really is the reason? Ideological war? Is Putin behind all this? Maybe none of this is even the point anymore; CEU is over and that’s it. They didn’t give a fuck about anything that is considered valuable in the free world, not even as regards the 10,000 people who spent their Sunday afternoon marching in Budapest.

What is even worse is that none of this even matters anymore. Thus, is this the road we take one by one, instead of acting as a community?

What is certain is that if there is ever a time when it is a civil, a national, and a patriotic duty to get involved in politics, this is that time!

Crying ‘dictatorship’ is pointless, but there is a point to stating that this is oppression.

There is no excuse for someone to take refuge in the private sphere, to hesitantly and quietly contemplate until there is no ground left. They crossed a line once again, attacking a private institution for foul political reasons. If it has been difficult for anyone to personally experience the miscarriage of justice, the deconstruction of the rule of law, the theft and passing on of public money, the government is more than helpful in introducing everyone to the mafia-like pace of the past 7 years.

Crying “dictatorship” is pointless, but there is a point to stating that this is oppression; a clever, sneaky, cheating oppression. You can be loyal, conformist, you can take refuge in the private sphere, you can oppose the regime quietly, or you can put your existence at stake; in the end, the reeking swamp taking all of us down will make you sick. It has been reeking for quite a while, but it’s beyond understanding if someone can take it after what happened to CEU.

Is silently surviving in this hopeless, gray, crippled country really what we want? Or will we stand up at last, saying: “We’re fed up, we won’t let you do this to us, get the hell out of here”?

I would love to ask different questions, but after today it will be difficult to do so.

Attila Kálmán is a Hungarian journalist based in Budapest. He previously worked for HVG and Népszabadság, and currently works at Kettős Mérce. He writes mostly about politics and education policy.

Attila Kálmán
Attila Kálmán is a Hungarian journalist based in Budapest. He previously worked for HVG and Népszabadság, and currently works at Kettős Mérce. He writes mostly about politics and education policy.
> see other articles <