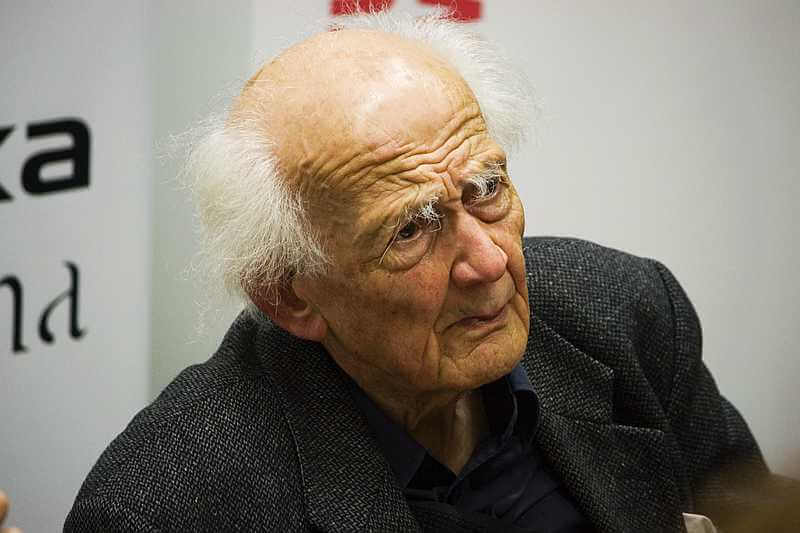 Helena Celestino: How do you explain the Brexit vote? What must Europe must to avoid losing more members states?

Zygmunt Bauman: Starting from the second sub-question: let’s hope that the mess that the Brexit adventure has cast and will be casting further on the (no longer…)United Kingdom may (just may) prove to be the best imaginable sobering concoction for those intoxicated enough to support the tribal “Euro-skeptics” in other member states of the EU.

But now to your first and fundamental question: for the millions of Britons left behind or fearing to be left at any moment without warning; for the victims of deregulated labour markets and financial forces, which have been let off the leash; of the reckless rising of inequality; of the fast shrinking of the ranks of the beneficiaries of the Ronald Reagan/Margaret Thatcher inheritance and equally fast multiplication of the mass of their losers; of the on-going descent of the once self-confident middle-classes into the condition of a frightened, disabled and unsure of itself “precariat” – the British referendum was the rare, well-nigh unique chance to unload their long accumulated, blistering/festering anger against the establishment as a whole: the system notorious for failing to deliver on its promises. In normal parliamentary elections, such a chance is severely constrained: rejecting one party, one part of the establishment, only to willy-nilly admit other to the same establishment who eager to manage it but who are  willing to do very little to change it. In the British referendum, however, all major parties of the establishment were on one side: the voters could manifest their indignation, disgust, resentment with and refusal to trust the whole establishment in one go: to the “order (or rather disorder) of things” as such.

The British referendum was the rare, well-nigh unique chance to unload their long accumulated, blistering/festering anger against the establishment as a whole.

The big question is, however, whether taking that chance will deliver the anti-establishment protesters more than just the satisfaction of a one-off release of their wrath. What oppressed and haunted the “leave” voters were – grossly misleadingly – diverted by the referendum’s organizers and focused on the European Union: the institution that with all its failings and misdemeanors served as a protective shield against the genuine culprits of all those woes and stresses that made the protesters frightened and angry; a shield admittedly far from foolproof, but managing at least to mitigate the damage that otherwise those genuine culprits would perpetrate. Those real culprits are financial, investment and trading powers (alongside criminality, terrorism, arms trade, drug trafficking) already globalized, extraterritorial and so emancipated from political control still in the hands of formally “sovereign” but territorially confined. All or most of the injustices and wrongdoings that made the protesters  protest can be traced back to the confrontation between the powers free from effective political control and politics suffering the constant deficit of power. The decision made in the referendum can not do much else than exacerbate that conflict, thereby facilitating the job of the uncontrolled powers while further diminishing the politics’ capability of controlling them.

A spike of hate’s crimes, financial crash, crises inside Conservative and Labor Party. Does it look like the government lost?

is a Polish sociolgist, philosopher, professor of humanities and one of the creators of the concept of postmodernism.

We are but at the very beginning of the (as Americans would say) a “new ball game” which none of the voluntary or involuntary players knows how to play, having no inkling of its rules (if there are any – particularly such rules that bind). What can be said at the moment with any degree of conviction is that all forces of the British establishment shot themselves in their feet and are emerging from the foolishly set test sorely discredited. Many “Leave” voters are already realizing their mistake and regret what they have done. Up to 4 million British signed the petition asking for a second referendum. I can’t predict whether a second referendum will take place, but I can vouch that many figures in the political elite who heedlessly (for the inner-party reasons) called the nation to the polls on one matter disguised as another have had (alas, belatedly) second thoughts.

Will nationalism and borders come back and last for a period of time in Europe? How do you feel about this new order?

“If states ever become large neighbourhoods, it is likely that neighbourhoods will become little states. Their members will organize to defend their local politics and culture against strangers. Historically, neighbourhoods have turned into closed and parochial communities … whenever the state was open” – so Michael Walzer retrospectively concluded over thirty years ago from the accumulated experience of the past, presaging its repetition in the imminent future. [1] That future, having turned into the present, confirmed his expectation and thus reasserted his diagnosis.

Courtesy of globalization and of the ensuing separation and divorce of power and politics, states are indeed turning presently into not much more than larger neighbourhoods confined to the inside of in only vaguely delineated, porous and ineffectually fortified borders – whereas the neighbourhoods of yore, once anticipated to accompany the rest of pouvoirs intermédiaries in their travel into the dustbin of history, struggle to take on the role of “little states” – making the most of what has been left of quasi-local politics and of the state’s once jealously guarded unshared and inalienable monopolist prerogative of setting apart “us” from “them” (and of course vice versa). “Forward” to the “little states” boils down to “back to the tribes”…

On a territory populated by tribes, conflicting sides shun and doggedly desist persuading, proselytising, converting each other; the inferiority of a member – any member – of alien tribe is and must need be and remain predestined – eternal and incurable – liability, or at least seen and treated as such. Inferiority of the other tribe must be its ineffaceable and irreparable condition and its indelible stigma beyond repair – bound to resist all and any attempt at rehabilitation. Once the division between “us” and “them” has been performed according to such rules, the purpose of any encounter between the antagonists is no longer its mitigation, but a gaining/creating of yet more proof that mitigation is contrary to reason and out of the question. To let the sleeping dog lie and avert misfortune, members of different tribes lock in a superiority/inferiority loop don’t talk to, but past each other.

Is the post 1945 order imposed on the world by the US and their allies unraveling?

The post-1945 “order” has been irretrievably unraveled with the fall of the Berlin Wall. Since then, the US tried repeatedly to replace it with a new order of pax americana. It failed abominably. At the moment, we all live on a multi-centered globe with no forces in sight that are alone or together capable or earnestly trying to “order” it. As Ulrich Beck, one of greatest thinkers of the past century prominent for his unique insight into the shape of things to come put it, we are already cast in a cosmopolitan condition but thus far we have not yet started to develop a cosmopolitan awareness (not to mention, as I would add, the institutions adequate to dealing with that cosmopolitan condition).

At the moment, we all live on a multi-centered globe with no forces in sight that are alone or together capable or earnestly trying to “order” it.

Europe failed to make policies to receive refugees and this was one of the reasons why UK voted to leave and also due to Mrs Merkel’s and Mr Hollande’s political difficulties. What could be done to balance the moral obligations and political reasons?

In the little book “Strangers at our door”, published a few weeks ago by the Polity Books, I’ve written of “universal and extemporal problems with “strangers in our midst” – appearing at all times and haunting all sectors of the population with more or less similar intensity and in more or less similar measure. Densely populated urban areas inevitably generate the contradictory impulses of “mixophilia” (attraction to variegated, heteronymous surroundings auguring unknown and unexplored experiences and for that reason promising pleasures of adventure and discovery), and “mixophobia” (fear of the unmanageable volume of the unknown, untameable, off-putting and uncontrollable). The first propulsion is the city life’s main attraction, the second being, on the contrary, its most awesome bane; especially in the eyes of the less fortunate and resourceful, who – unlike the rich and privileged who are capable of buying themselves into the “gated communities” to insulate themselve from the discomforting, perplexing, and time and again terrifying turmoil and brouhaha of crowded city streets – lack the capacity to cut themselves off from the numberless traps and ambushes that are scattered all over the heterogeneous, and all too often unfriendly, distrustful and hostile urban environment, to whose hidden dangers they are doomed to remain exposed to for life. As Alberto Nardelli informs in The Guardian, “Nearly 40% of Europeans cite immigration as the issue of most concern facing the EU – more than any other issue. Only a year ago, less than 25% of people said the same. One in two of the British public mention immigration as among the most important issues facing the country”.

It is human, all too human, habit to blame and punish the messengers for the hateful contents of the message they carry from those baffling, inscrutable, frightening and rightly resented global forces which we (for a sound reason) suspect to bear responsibility for the agonizing and humiliating sense of existential uncertainty, which wrecks and grinds down our confidence as well as plays havoc with our ambitions, dreams and life plans. And while we can do next to nothing to bridle the elusive and faraway forces of globalization, we can at least divert the anger they caused us and which they go on causing, and unload our anger, vicariously, on their close to hand and within reach products. This won’t, of course, reach anywhere near the roots of the problems, but might relieve at least for some time the humiliation of our haplessness and our incapacity to resist the disabling precariousness of our own place in the world.

That twisted logic, the mindset it generates and the emotions it lets lose, provide highly fertile and nourishing meadows tempting many a political vote-gatherer to graze on. This is a chance, which a growing number of politicians would loathe to miss. Capitalizing on the anxiety caused by the influx of strangers, who are feared to push further down the wages and the salaries already refusing to grow and to lengthen yet more the already abominably long queues of people lining up (to no effect) for the stubbornly scarce jobs, is a temptation to which very few politicians already in office or aspiring to an office would be able to resist.

This interview was originally published in the Brazilian weekly newspapers „Valor”.