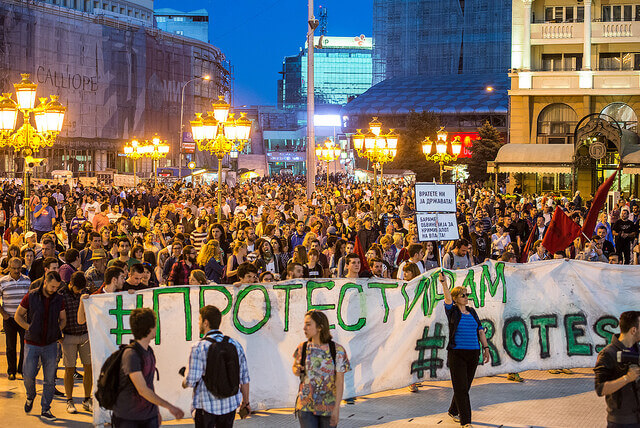 Protesters in Skopje on 16 April 2016. Photography by: FOSIM, Flickr.com

On Tuesday 12 April, the President of Macedonia, Gjorge Ivanov, did something that was unthinkable: he issued a blanket pardon to members of the political establishment by halting ongoing investigations into a plethora of cases of alleged corruption, abuse of office, embezzlement and election fraud. These investigations were conducted by the Special Public Prosecutor Office – an institution set up to resolve cases that arose from a wiretapping scandal in 2015, when a number of audio recordings were released to the public, highlighting a series of transgressions by the ruling VMRO-DPMNE and BDI government.

Initially, the wiretapping crisis was addressed through the so called Przhino agreement of 2015, which was brokered by the EU. The agreement set out a roadmap leading toward elections in April 2016. These actions included increasing the capacity of the State Election Commission to organise fair elections; reestablishing Parliamentary oversight over the Internal Security Agency of the Ministry of Interior (which performed the illegal wiretapping of key officials of the government, opposition, journalists, businessmen and civil society activists); placing ministers or deputies from the opposition in key ministries and implementing necessary reforms of the media; and establishing the Special Public Prosecutor.

All these measures were in fact geared toward decreasing ties between the offices of the state and the ruling party, which was one of the key recommendations made by the OSCE/ODIHR for fair elections to take place in Macedonia. Finally, 100 days before the elections, the Przhino Agreement stipulated that the Prime Minister, Nikola Gruevski, should step down and resign, with a technical government being formed to organise the elections.

The negotiations, mediated by the EU, were marred by constant setbacks, resulting in severe delays which put into question the possibility of fair and credible elections being held in April. Even though Nikola Gruevski resigned as planned, international stakeholders (the EU and the United States) eventually produced authoritative analyses which cast doubt on the elections being held, which were matched by calls from leading think tanks and watchdogs. This set the stage for an extension to the original schedule and a new date for the elections (5 June) was ultimately agreed.

This extension was made in order to provide more time for the voter registry to be cleared to address fears of duplicate and ‘phantom’ voters that could be exploited for the purposes of election fraud. Although this cleanup has begun and some progress has been made, it remains doubtful whether everything can be completed by June, with about a third of the voters marked as ‘problematic’ in the database checks and tens of thousands being selected for field checks.

On 15th of April, the State Election Commission (SEC) concluded that the cleanup was completed, but this decision was not unanimous and it was boycotted by the President of the SEC as well as members representing SDSM. As such the credibility of the voter registry is now in question. Meanwhile, a lack of media reform has added to concerns over how level the playing field will be for the parties in the run up to the elections. The lack of progress on this issue led to several proposals for legislation by different stakeholders, which were eventually rejected in the Parliament. The Parliament dissolved on 15 April, further heightening the pressure for elections to take place in June.

With all these accumulated setbacks, the only deterrent for electoral fraud was the possibility of the Special Public Prosecutor charging individuals over previous violations. A subsequent investigation, which was dubbed the ‘Titanic’ case, was intended to do precisely this. The investigation involved high ranking officials from VMRO-DPMNE, who were alleged to have organised systematic electoral abuses in previous elections.

However, the decision by the President of the Republic to pardon many politicians involved in these and other investigations put an end to this prospect. His justification for issuing the pardons centred on the notion that the investigations could potentially be abused during the election period. He has so far failed to convince the relevant experts, civil society actors, or the EU and the United States that his decision will be beneficial. Reactions from the EU’s Commissioner for European Neighbourhood Policy & Enlargement Negotiations, Johannes Hahn, and the US State department emphasised that the President’s decision risked seriously undermining the rule of law and the path towards democratic recovery. The majority of legal experts are convinced that his decision is not based on a sound legal footing and thus is unlawful. In addition, by halting investigations in their early stages, his decision has raised concerns about unlawful intervention in the judiciary undermining the division of power between Macedonia’s three branches of government.

Ultimately, this has simply exacerbated the political crisis. The only way toward reconciliation had been for those involved in illegal activities to be charged and sentenced. This prompted citizens on 12 April to gather in front of the Special Public Prosecutor office to show their support and march toward the President’s Citizens Contact Office in the centre of Skopje as a protest. On the second day, the protests turned violent when the protesters demolished the office and clashed with police. But the protests have since regained their peaceful character, with opposition expressed through other means, such as painting public buildings or drawing graffiti.

What is clear is that the elections can no longer feasibly be held in June and that the Przhino Agreement has failed to deliver significant results. The situation is also now a ‘make or break’ scenario for Macedonia’s civil society. Some civil society organisations have demanded the resignation of the President, while others have simply protested against his decision to issue the pardons. They have also voiced support for an interim government to be established with the aim of implementing the EU’s proposed reforms and then holding new elections. Even though this could take a substantial period of time, the Przhino experience and the deficient deadline based methodology it has been based on offer some evidence for why this could be a better option.

As Macedonia’s political system continues to falter, it will be the country’s citizens who will be tasked with raising it from the ashes.

But for this to happen it will be necessary for civil society to demonstrate that another agreement will not be possible without some responsibility being taken by those alleged to have engaged in corruption, abuse of office and electoral fraud. Recent comments by the EU and the US about bringing back negotiations under the Przhino format are distinctly unhelpful in this context. The international community’s attempts at moderation have allowed plenty of room for manoeuvre for VMRO-DPMNE, who evidently have not demonstrated a sincere motivation for conducting reforms.

A greater focus should instead be placed on supporting the protesters in demanding that negotiations are reestablished, with those who are accused of wrongdoing prevented from taking up their seat at the table. It would also be beneficial for smaller political parties and civil society to have adequate representation in these negotiations. And perhaps most importantly, the international community should show greater willingness to listen to local organisations involved in monitoring the elections, who have consistently stated that the conditions for free elections are simply not in place at present in Macedonia.

Meanwhile, the protests will continue regardless, with citizens demonstrating that the country’s institutions now have little legitimacy in their eyes, having become co-opted for individual political gains. As Macedonia’s political system continues to falter, it will be the country’s citizens who will be tasked with raising it from the ashes.

Misha Popovikj
Misha Popovikj is a researcher at the Institute for Democracy ‘Societas Civilis’ Skopje. He is a UCL/SSEES alumnus.
> see other articles <