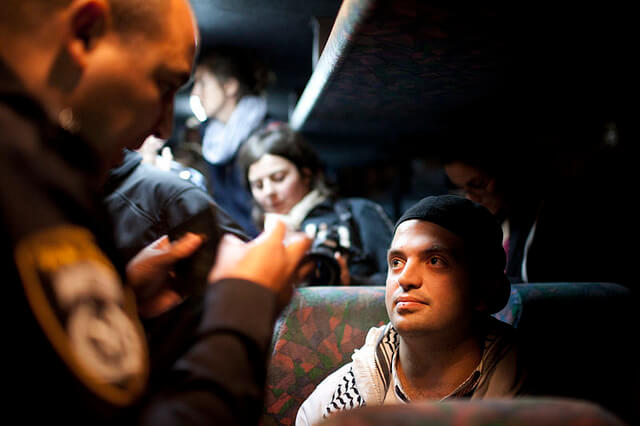 ‘There’s 1.5 million of us here who are almost forgotten about’

If you ask most people in Poland, or indeed most European countries, what they know about Palestinians, they might mention Gaza, the West Bank or East Jerusalem, the Second Intifada or refugees, 1948 borders or a two-state solution. Some might mention bus bombings, others the violence of the Israel Defence Force (IDF) or use words like apartheid, boycott, wall, or occupation. Very few though will make mention of those Palestinians living in Israel who make up over 20% of the country’s population and who face discrimination on a daily basis in all walks of life.

The 1948 Declaration of Independence defined Israel as a ‘Jewish state’ and its ‘democratic’ character was added in the Basic Laws of Israel, passed in 1985. In 2013, a survey by the Israel Democracy Institute, a non-partisan NGO, found that approximately three quarters of Jewish Israelis believe that the State of Israel could be both Jewish and democratic. By contrast, two thirds of the Palestinian citizens of Israel believed this to be impossible.

According to Adalah, a Palestinian run legal centre working on Arab minority rights, the definition of the State of Israel as a Jewish state ‘makes inequality and discrimination against Palestinian citizens of Israel a reality and a political project. The pairing of “Jewish” and “democratic” both codifies discrimination against non-Jewish citizens and impedes the realization of full equality’.

It is not just racial profiling that Palestinians are faced with. In fact there is direct and indirect inequality and discrimination in most walks of life.

Over recent years, successively more right-wing governments, led by Benjamin Netanyahu, have attempted to foreground and give more prominence to the Jewish character of the state of Israel. The sum total, says Sari, is to make Palestinians feel less welcome. ‘The state does everything possible to make sure we don’t have any more attachment than this instrumental citizenship. The state doesn’t want us to be attached to it. It is clear in its policies and words’, says Manar Yaqub, co-founder of 7amleh, the Arab Centre for Social Media Advancement.

‘My state is at war with my nation’

‘Our connection to Israel is obviously very complicated’, says Nadim, ‘it was a State which was built on our homeland, a state built on the Naqba’ when 500 Palestinian villages were destroyed. ‘We were forced to have citizenship. It is an abnormal reality when a state conquers you and forces you take citizenship’. Identity is something you feel or to which you belong, for him, based on collective Palestinian memory. His Israeli citizenship does not imply emotional attachment. ‘It’s not something I feel affiliated to or feel part of. Jewish symbols, the anthem, the flag. Nothing of this is related to me’.

Instead, for many Palestinian citizens of Israel, membership of the Israeli state is purely instrumental or a necessary functional tool. For Manar it’s not easy holding a passport that denotes an enforced citizenship and yet, she says, she would never give the passport up: ‘It’s the only way to travel out of Israel for us. To come home to my family. It’s a tool for me and nothing more than that’.

According to Sari, of the organisation Human Rights Watch, discrimination has increased in light of a significant escalation in violence, for example, stabbing attacks carried out by Palestinians on Jews throughout Israel and especially in Jerusalem. There has been a shift to the right and a hardening of policy, says Sari, ‘whenever the security situation deteriorates, discrimination increases. Rights are restricted in the name of security’.

This especially comes in the guise of increased racial profiling of Palestinian citizens in Jewish cities, on trains, and outside shopping malls and banks. In January two Palestinian citizens of Israel were removed from an Aegean Airlines flight after Jewish Israeli passengers claimed they constituted a ‘security’ risk. Many Palestinians choose to Speak Hebrew to each other in public because they are afraid to be heard speaking Arabic.

And yet, it is not just racial profiling that Palestinians are faced with. In fact there is direct and indirect inequality and discrimination in most walks of life. The successive governments of Netanyahu, in 2009 and 2013, have introduced a flood of discriminatory legislation that, according to Adalah, sought to ‘dispossess and exclude Arab citizens’ in multiple ways.

According to Nadim, when Israel was founded there was a sophisticated system of discrimination that wasn’t so explicitly racist. However, in the last ten to fifteen years, this racism has become very open, clear and obvious. Israel doesn’t care about its international image, he claims, ‘It doesn’t care too much about what the world will say’ and any criticism is met with claims of anti-Semitism, which in effect shuts down the debate.

In addition to legislation, there are myriad other ways in which Palestinians are discriminated against. Language policy demonstrates a lack of respect for the Arab Language – translations are not universally available and many services are not available in Arabic. Town names are in Hebrew and English, but not Arabic, despite it being an official language of Israel. Maps show Jewish areas much more prominently than Palestinian ones.

Funding and services, too, are unequally distributed. The level of public money given to Palestinian towns is much lower than Jewish ones and infrastructure is primarily located in Jewish areas. There are hardly any hospitals in Arab towns and when it comes to renting accommodation, Manar says, ‘once the owner knows from your accent that you’re Palestinian they’ll say no sorry, it’s not available any more’.

Access to a lot of services and benefits in Israel is dependent on completion of military service. Whilst it is not compulsory for Palestinian citizens to serve in the army (unlike most other Israelis), though a few do, the vast majority refuse to.

Nadim sees Israeli society as highly militarised. ‘The military and militarism is used in many cases as an excuse to not give equal rights’, he argues.

As such, they are not privy to many of the benefits officially tied to military service, such as grants for housing, scholarships, and dormitories at universities. Unofficially, military service can be used to refuse employment. Employers can request that applicants have completed their army service. ‘It’s a coded way of saying we don’t accept Arabs; a way of legal discrimination’, adds Nadim.

The result of this discrimination – in employment, in language, in hospitals – is that existing power inequalities are maintained. On top of this, the courts, which should, in any other democratic country, challenge such discrimination, are, in most cases, reinforcing it.

One of the effects of the occupation and the limits on travel and status has been to fragment the Palestinian population so that they don’t know each other well.

Nowhere, though, is this discrimination felt more acutely than in education. According to Adalah, Arab kindergarten students receive 16% less funding per head than their Jewish counterparts. Overall, Arab high school students from weak socioeconomic backgrounds receive 42% less public funding than Jewish students from a similar background, The curriculum, too, is skewed towards Jewish or Israeli culture and traditions and, crucially, Israeli interpretations of history. Students in Arab schools don’t learn about Palestinian history or traditions.

The NGO Baladna offers an alternative, external curriculum, outside of the school system. Their courses allow Palestinian children to learn, discuss and evaluate their own identities and history, free from censorship. The aim, says Nadim, is to allow them to connect with their identities, but also to examine and criticise them from different positions. This is something that is denied  to them in state schools. The hope is that, later, young people will feel more affiliated with Palestinian society and will become more socially engaged through, for example, volunteering.

‘For some we were a mystery’

As Sari notes, one of the effects of the occupation and the limits on travel and status has been to fragment the Palestinian population so that they don’t know each other well. As a result, this is a single community which is, in actuality, fragmented. Despite extensive cultural, economic and historical ties, different parts of the Palestinian community are separated geographically and don’t interact with each other. ‘For years there were no connections between the West Bank, Gaza and Palestinians in Israel’, says Manar, ‘I swear, sometimes when was in Egypt and I told them I lived in Israel they thought I was Jewish’.

In general it is difficult to access wider parts of Arabic culture within Israel (Arab cultural figures would refuse to perform in Israel, and even if they didn’t, their visa applications would likely be rejected). The result has been a disconnection from Palestinian refugees and other Arab nations, which in turn has led to the emergence of stereotypes and, often, suspicion. Sari notes that, especially among the wider Arab world, Palestinian citizens of Israel are often suspected of being spies. It is also difficult to travel to many Arab countries with an Israeli passport.

Citizenship should be your connection to the state, not your religion or ethnicity.

However, more recently, satellite TV and especially social media have helped to bring the Arab world, in particular the Occupied Territories, closer to Palestinians in Israel. There is now more understanding and the differences are felt less and less.

As Manar argues, ‘We’re all on the same side. Of course there are differences between where you live or in terms of occupation, but when it comes to heritage, we’re all the same’.

However, regardless of this resistance, prospects for the immediate future are laced with negativity. Manar believes that there is no solution in sight and that things will get worse for all citizens of Israel. The continued cost of security is becoming prohibitive, she adds, and there’s a question of how long the state can maintain the expenditure.

For Nadim, the only way forward is a one state solution, a secular state for both Jews and Palestinians. ‘Any nation state you build will oppress somebody here. It should be secular and democratic. Citizenship should be your connection to the state, not your religion or ethnicity’.

In reality though, just as there had been little positive change in the last decade, he does not foresee much change in the coming years. According to Sari, Israel’s relationship with the West Bank, Gaza, and the Palestinian diaspora cannot be divorced from its relationship with its own Palestinian citizens: ‘As long as you have continued conflict and continued desire among those in government to maintain Israel, in a very aggressive way, then you’re not going to see any equality among Palestinians and Jewish citizens’.