Unlock your smartphone, open the app, click request and there you go. We all know how it works. The recent customer-and-driver-friendly technology introduced by Uber ushered-in the new age of the taxi (which are technically not taxis, but we use them as taxis, don’t we?), filling in the gaps of conventional cab service. Drivers are free contractors with flexible hours, while riders are able to get a ride at any hour or place, and their phone pays for the ride automatically. Comfortable and cheap, Uber is an integral part of the mysterious and innovative sharing economy, a business model for other ambitious start-ups.

This climate made Uber’s innovative technology less unique and as a result fresh and creative ideas on the improvement of the service along with aggressive politics has become the company’s trump card. The combination appears to have been quite successful as Uber’s income and influence continues to progressively increase, making it one of the most important companies in today’s market. Be it a food delivery, a luxury car ride or even a helicopter in any of the 674 cities across the world – Uber is desperately spreading its roots in various technologies and countries to ensure its superiority.

As an active Uber-user myself it took a while to figure out that the comfort and convenience of the app come at a big price behind the curtains. This is especially true when it comes to their operations outside the U.S., which caused a serious backlash from employed drivers, governments and international companies. Here is a list of Uber’s lessons on how to turn the world against you.

Just like our ancestors with the ultimate goal of conquering the world, Uber has been determined to break the rules. However, if this was somehow possible in US, where you could allegedly easily sabotage your rival to get more users on your side, hard-tempered Europe wasn’t ready to accept the surge. Ever since the company introduced UberPop back in 2012, which allowed unlicensed drivers to do a ‘ride share’ with their own car and get money for it, Uber has been at the centre of European labour battles.

Many countries in Europe instantly banned Uber altogether such as Denmark, Bulgaria and Hungary. Others decided to modify the company’s rules under national law.

The conventional cab drivers around Europe were furious with the unfair competition.

It all started back in 2014, when French authorities became concerned with Uber’s unfair practices on the basis that they sold ride-sharing services as taxi ones, while not paying appropriate taxes. Then on 11 June 2014 the protests spread around Europe’s major cities – London, Berlin, Madrid and, of course, Paris. The conventional cab drivers around Europe were furious with the unfair competition caused by UberPop, leading to brutal attacks on Uber cars throughout the demonstrations.

UberPop was subsequently banned in Finland, France, Spain and the Netherlands . On the other hand, it managed to find an agreement with Germany by modifying UberPop to UberX, therefore working legally under the German law. Italy briefly banned Uber and all alternatives, but lost the company’s appeal to the court’s decision and so allowed Uber to operate in the country in its original form with licensed drivers. The battles continue in Portugal and Poland, where Uber services are considered to be run illegally according to Algarve Daily News and The Krakow Post respectively, but somehow still manage to work.

Today, Uber continues its legally dubious operations in Europe, having numerous fines for breaking the law. This proves just how difficult it is to stop a gigantic start-up.

Lesson #2: Not having allies can harm you real bad

Nevertheless, unlike Europe, China managed to stop Uber’s expansion by forcing it to play by the rules. The Chinese ride-hailing company, Didi Chuxing (https://www.youtube.com/watch?v=03vtjIcNvBg – Didi’s ad). Uber’s biggest rival, played their cards well during Uber’s attempt to take over the Chinese market. Less than a week after the Chinese regulator legalized ride-sharing, Uber sold its business to Didi in a $35 billion deal and fled China. Despite such a terrible loss, Didi’s President Jean Liu famously called the attempt ‘cute’.

So, why did Uber lose? Apart from not being a Chinese company, Uber was fighting not just Didi, but also Lyft, Grab and Ola, rival companies that bonded together to fight Uber’s global surge. Considering all the funds these companies received it was quite easy to beat the San-Francisco rival in a fair play.

Lesson #3: Stay evil under all circumstances

What happened in Sydney during the 2014 terrorist attack was probably the top level of evil a company could reach. According to New Republic ,the single ride from the hostage siege was at $100 cost. As Uber later explained in the same source, they had to somehow encourage the drivers to work at the time of the terrorist act. Representatives brought into the notion of dynamic pricing, where rates vary depending on the number of ride requests and time, which caused the price to increase so drastically. The price surge was considered immoral on the part of the company and led to yet another strong backlash against Uber, forcing it to refund the money to users.

Lesson #4: Don’t pay taxes when you can avoid them.

Uber’s cutting-edge tax system outside US is truly impressive. Not only has the company managed to get rid of the need to pay taxes in the US for the network of subsidiaries, it also minimizes the taxable income outside its borders, thanks to a ‘Dutch Sandwich’ or ‘Double Dutch’ model of tax avoidance. According to Fortune, this is a proven method not just for Uber but for other giant corporations, such as Google. Just use a pair of Irish or subsidiaries and move the income to a haven like Bermuda. This tax loophole shown in the graph below has been effectively used to avoid around  £40 million in tax every year. 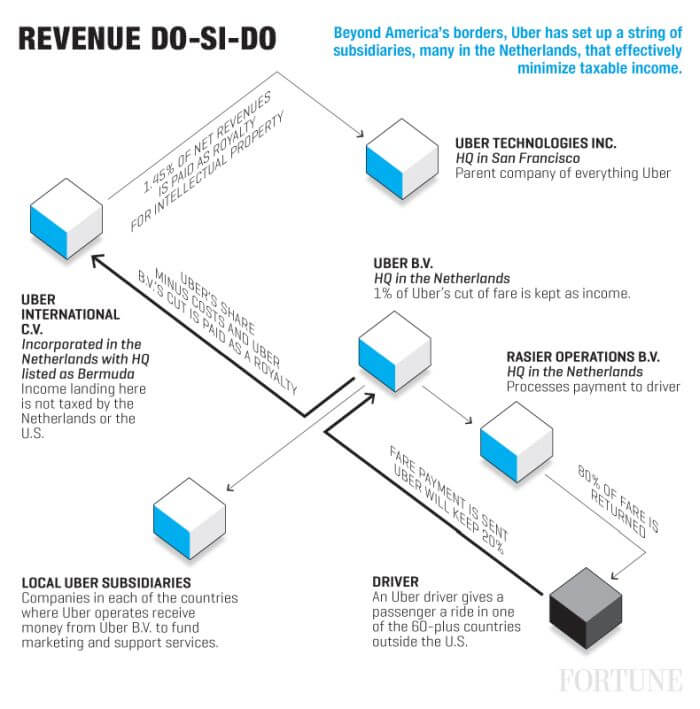 Headquarters listed in Bermuda, which under Dutch law allows Uber to avoid taxes in the Netherlands.

Back in 2013 the first subsidiary Uber International C.V. (commanditaire vennootschap) was created, with zero employees and a headquarters listed in Bermuda, which under Dutch law allows Uber to avoid taxes in the Netherlands. Later throughout the year, the agreement with other new subsidiaries was achieved together with the cost-sharing deal between Uber International C.V and Uber Technologies (the parent subsidiary of Uber), where the latter is paid a one-time fee of $1,010,735 plus a royalty of 1.45% of future net revenue for the right to use Uber’s intellectual property outside the U.S. This is how Uber avoids tax authorities on most of it foreign profit.

The second part of a ‘Dutch sandwich’ is yet another important subsidiary, a type of private limited liability company in the Netherlands – Uber B.V. that keeps 1% of Uber’s cut of the fare (20%) and funds Local Uber Subsidiaries in other countries for marketing and support services only. Unlike Uber International C.V. it requires employees as there are a lot of transactions to process. Uber’s share minus costs and the Uber B.V. cut is paid as a royalty to Uber International C.V.

After Uber B.V. receives the fare, 80% of it goes to Rasier Operations B.V., which sends it over to the Uber Driver. Then it is a driver’s responsibility to take care of the taxes on his or her earning as well as the vehicle costs. If we compare Uber’s one ride income to that of the driver’s, we can clearly see that the model brings more profit to Uber rather than a driver.

This complicated equation turned many former Uber drivers against the company, leading to numerous protests around the world. Following the ‘black cab’ event, more than 100 Uber drivers participated in a go-slow protest in London and demanded mayor Sadiq Khan to push the American company to increase the minimum wage. Prior to this event, Uber lost the right to classify its workers as self-employed in a court case brought by two former Uber drivers. Even then, the company refused to apply the ruling to all its workers, but rather only to the ones who brought the case. Nonetheless, the tribunal’s decision may lead to drastic changes in Uber’s tax system.

To deal with the situation, Uber introduced the ‘180 days of change’ program in June 2017 to solve the issue of drivers’ rights. The program already includes new benefits for drivers such as tipping, driver injury insurance, etc. and declares to continue to contribute to better relations with its drivers.

Even though the program’s changes are clear and on point, Uber doesn’t stop there. These modifications come at the cost of riders since fares are increasing as well. Meanwhile, Uber’s marketing team is at its best, creating new solutions and psychological tricks to make both drivers and users click the button. For example, the company now sends encouraging messages to make more rides for drivers as well as new ride deals and price-cut codes for users. Such tricks can influence the users’ demands and drivers’ working hours, pushing them to work more towards the ultimate service of Uber’s corporate growth.

Because the more we all click, the better… at least for Uber.

Featured image ‘The Prisoner of Golconda’ courtesy of Bill Smith. The familiar Magritte imagery merged with the ending image from The Prisoner.