A few years ago, the Mayor of Naples, Luigi de Magistris, was told to fire 300 teachers to comply with strict austerity regulations imposed by the central government of Matteo Renzi. De Magistris, a former prosecutor, refused to comply and appealed to the constitutionally protected right to a quality education for all. He was sued and brought to court, where he argued and won his case. The Italian constitution, the judges concluded, has precedence over regular legislation. The teachers – and the mayor – were reinstated in their place.

Today, after mayor De Magistris was re-elected in 2016 with a crushing majority, Naples remains a city of great social participation and political innovation. Naples was the first Italian city to establish a “Department of the Commons” and the first to change the municipal statute by inserting the commons as one of the interests to be protected and recognised as the functional exercise of fundamental rights of the person. It has joined the network of ‘shelter cities’ welcoming refugees and is experimenting with new forms of co-decision making between citizens and institutions.

You were recently re-elected as Mayor of Naples supported by civil society lists and social movements, and without any of the main political parties backing you. Some of the activists who protested in the streets against austerity and corruption are now city councillors with you. What is the relationship now between civil society and the institutions?

Beyond the social network revolution, we also want to be together physically.

This is an absolute novelty in the institutional and political panorama. The relationship between civil society, social movements, and local institutions is one under construction, where each has to preserve its autonomy while building new relations and forms of participation. There are traditional channels such as the participation of representatives of social movements or occupations in the Council. But then there is also a new way of working together. For instance, in discussing together the proposals for new municipal laws, in a process of co-deliberation of the regulations that govern the city. How does this happen? Through direct contact, open meetings, popular assemblies in the neighbourhoods, observatories, and by keeping a direct relation with social centres and spaces of activism and active citizenship. For instance, an important project to demolish and replace “Le Vele”, an infamous social housing project dating back to the 1960s, was co-designed by the City, the University, and the autonomous neighbourhood committee. This is an open area of experimentation and more ideas and practices will come out in the coming months. Including through the use of online technology. But beyond the social network revolution, we also want to be together physically.

Back in 2011, in a landmark referendum, 27 million Italians voted for water to be considered a ‘common good’ and be returned to public ownership. Naples is the only one among the large cities to have followed up on this request, bringing back water management under municipal control and beginning to develop a participatory management for the company. How is the process going?

We are very happy with this. Obviously, there are juridical, technical and financial difficulties, but we have transformed a for-profit company into a public company that is now taking on board the full cycle of water management and has increased the number of employees. We have demonstrated that participatory management can also be an economically viable solution. Now we need to take more steps towards the participation of workers and citizens in the Board and management of the company. But we remain committed to the idea that water is a commons and we aim to be at the forefront for its participatory management at a European level.

Speaking of the commons, Naples has a number of buildings occupied by citizens and social movements utilised for cultural, social, or solidarity initiatives. You have recently passed an innovative law identifying such spaces as social commons. Or, in other words, legitimising and legalising social occupations of unused public and private properties.

These are not occupied but liberated spaces. There are situations where, for whatever reason, public or private owners leave buildings to decay, shutting them off from the population and creating empty zones in our cities. When groups of citizens take them over, clean them, repair them, open them up with social, sports, or cultural activities, these spaces are returned to the citizenry. They are a new commons and they should be treated as such. Not criminalised and evicted.

Could the model of the commons, with participatory public management be expanded at national level with public companies?

Yes, the model needs to be extended to state-controlled companies. This is, after all, what Article 41 of the Italian constitution demands, with the idea of civic uses. We have taken back this juridical instrument. Our project is nothing more than the implementation of the republican constitution. And so the same needs to happen at national level.

The photos of Neapolitan citizens holding ‘refugees welcome’ signs in Naples went viral in Italy, especially as during the same days in other parts of the country demonstrations against refugees were taking place. What’s different in Naples? What refugee policy are you putting in place?

Naples is a refuge city and a city of shelter. We believe solidarity and welcome policies are the best antidote to terrorism and the best way of building bridges between cultures and guaranteeing peace. In Naples, we are either all illegals or no-one is illegal. This is the history of our city, but it is also our political vision. Naples is at the vanguard of a new ‘diplomacy from below’ working for a Mediterranean of peace and not war – for instance we are increasingly working with North African cities. Let me tell you a story that engaged the whole citizenry of Naples. There was recently a large-scale arrival of migrants from Libya. Naples is a city with a lot of suffering and great economic difficulties: but we have had a rush for solidarity from all citizens. They were offering not just food and clothing but also opening up their houses to host the migrants. On Christmas eve all those who arrived were hosted by and celebrated with Neapolitan families.

The question of migration is a good example of a possible new relation between the municipal and the European dimension. Ada Colau has given momentum to a network of European cities of shelter. Gesine Schwan, amongst others, is pushing for a direct connection between cities and the European refugee relocation scheme. Can we imagine a new European role for cities, also bypassing the nation state?

This is already a reality. I worked towards this aim when I was a member of the European Parliament in Brussels. As president of the Budget Committee I worked for a considerable share of EU funds to be directly assigned to cities. We need a Europe of cities, a Europe of the people, a Europe of justice and of economic equality. We need to push Brussels to give a greater role to cities and territories, which is a precondition for a more prosperous and democratic future. There are interesting signs emerging not only from Naples but also from Barcelona, Berlin, many cities in Eastern Europe and even London. This is the Europe that opposes that of austerity and budget constraints, walls and borders. This is what we are working for from below. And Naples is on the front line. 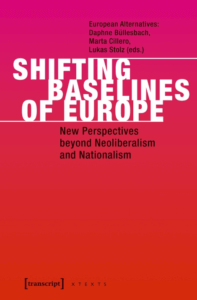 This is an edited extract of an interview from Shifting Baselines of Europe, a book by European Alternatives. Shifting Baselines of Europe proves that Europe has more options than only Neoliberalism and Nationalism. The book brings together reflections from well-known authors with presentations of emancipatory projects from across the continent: from the municipal level to the level of transnational media, from technology and counter-surveillance to a concrete proposal to revive the European refugee policy.