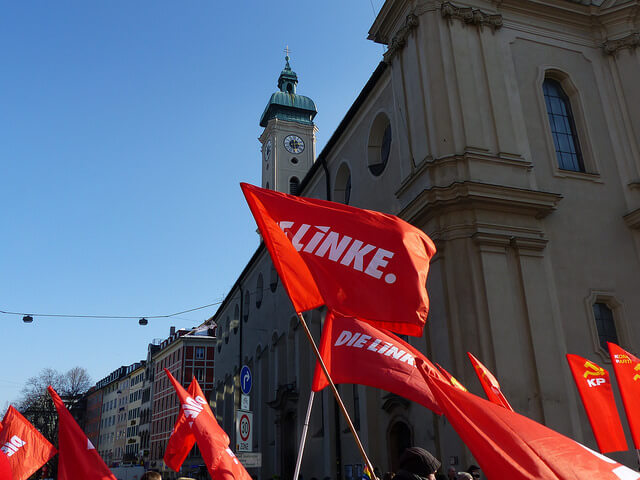 There’s been a visible shift to the political right all over Europe in the past decade, undoubtedly a development many different factors play into. New parties have been formed, older far-right parties have gained in popularity. Most recently, the refugee crisis has arguably brought out the worst in European politics; lack of leadership and a lack of opposition to right-wing populists have allowed for anti-democratic, racist voices to join the political discourse surrounding the issue of refugees from the Middle East and Northern Africa.

Rather unexpected positions taken up by Die Linke include their adoption of nationalism, while their frequent anti-Semitism resembles that of other European leftist parties.

In 2013, a group of German Eurosceptics founded the far-right Alternative for Germany (AfD) party, whose momentum is due mostly to its proximity to the Islamophobic Pegida movement. The party has since become the leading political voice for xenophobes and far-right extremists in Germany, with recent polls even suggesting it would be the third-biggest party nationwide, if elections were held today.

So how has the political Left responded to these developments? It would have been a good opportunity to come out in rigorous opposition to rising right-wing populism. The democratic socialist party Die Linke, (“The Left”) has had that chance – or even duty – and wasted it. Worse still, instead of opposing xenophobic agitation against refugees, parliamentary leader Sahra Wagenknecht stated that “He who abuses his right to hospitality, has forfeited this right to hospitality”, completely disregarding the the United Nations Convention Relating to the Status of Refugees. Her stance was praised by the AfD, who congratulated her for “nicely putting the situation in a nutshell.”

Some other, rather unexpected positions taken up by Die Linke include their adoption of nationalism, while their frequent anti-Semitic resembles that of other European leftist parties. Wagenknecht told German newspaper Die Welt that providing non-Germans with an education was a “slap in the face for hundreds of thousands of young people who live in Germany, many of whom have never had a chance. […] Before we entice talent from other countries, we need to start an education offensive in Germany and educate the lost generation”, a statement typical of the far right, not of someone allegedly advocating solidarity with – and equality for – all people.

Not uncommon, and unequivocally worthy of criticism is the party’s anti-Semitism. There has been a certain unwillingness among the party’s leaders to address anti-Semitism within their ranks, even more so since long-time leader Gregor Gysi stepped down as parliamentary leader in 2015. Gysi has always been much more careful about accusations of anti-Semitism than most of his fellow party members. It’s particularly odd that an allegedly democratic socialist party would have members organizing a pro-Hamas demonstration, including chants of “Death to Jews,” glorification of Adolf Hitler and Nazi crimes, as well as swastikas and Al-Qaeda flags.

But that’s just a fraction of the anti-Semitism within Die Linke. There’s Inge Höger, member of the Bundestag, who publicly wore a scarf upon which a map omitting Israel was printed (denying Israel’s right to exist is widely considered as anti-Semitic in Germany), on another occasion the party refused to join a multi-party appeal against a call to boycott Israeli products. Such a call is reminiscent of Nazi campaigns against patronizing Jewish shops in the 1930s.

The question among the German Left is now whether Die Linke can be rescued from its path to self-destruction, or if a new party should be born from its ashes.

Occasional transgressions – like a swastika entangled with a Star of David on a local party website ­– can be put down to singular individuals, but in 2008, eleven members of Die Linke in the Bundestag refused to support a resolution against anti-Semitism, a dangerous decision for any German party to make. There are numerous party members who have shown that they have highly problematic stances on various issues – and then there’s Diether Dehm. Why this particular party member is worth special attention becomes clear with an appraisal of some of the dubious things he’s said and done. Dehm was involved in the so-called vigils of peace, a movement out of which the xeno- and Islamophobic Pegida evolved, and where anti-Semitic, right-wing populist sentiments are more than common. One of his friends at those demonstrations was Ken Jebsen, Germany’s leading conspiracy theory devotee, who once said the “Holocaust was invented as a PR stunt”. He is friends with Kathrin Oertel, founder of Pegida. His assistant in Parliament is a former Red Army Faction terrorist, and he has compared the choice between the current and previous German president to choosing between Hitler and Stalin. To be fair, Diether Dehm is only one of 64 of Die Linke‘s Members of Parliament, but the fact that none of his controversial outbursts has provoked even one comment from the parliamentary leadership suggests that these issues may have their roots deep within the party.

All in all, the question among the German Left is now whether the party can be rescued from its path to self-destruction, or if a new party should be born from its ashes. For the past few years, leftists in Germany have been too lazy to engage in politics – it’s high-time they  participate, if only as a counterweight to the general shift rightwards.