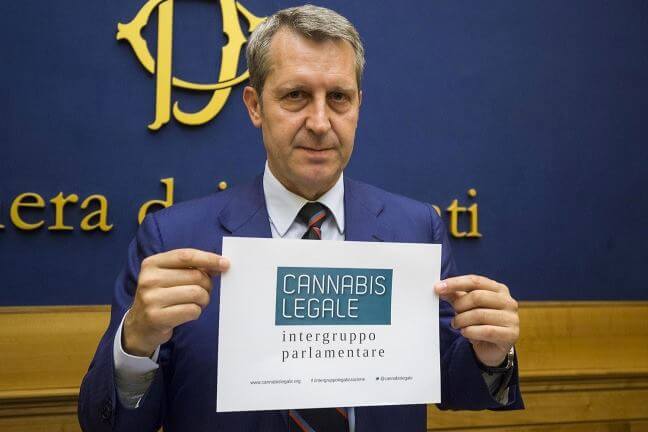 Today in Italy no-one would put you in jail for smoking a joint but if caught you, could still get a fine. If you really want to end up behind bars though, you can try selling or growing weed – even small amounts for personal use are criminalized. When it comes to medical cannabis it is legal to sell and smoke it (if you have a prescription) but not to grow it. However, in January 2016 penalties for medical weed users who cultivate cannabis plants were significantly relaxed. These regulations are not so different to what is legal in most European countries.

How does the reality look on the ground? In short, Italians smoke weed and they are fed up of hiding their spliffs. According to the European Monitoring Centre for Drugs and Drug Addiction (EMCDDA) almost a third of all Italians admits to smoking weed at least once in their lifetime. Additionally, close to 20% of young adults (up to 34 years old) used cannabis once or more in the last year. Nine percent smoke on a regular basis, which puts Italy in the European forefront of smokers, along with the Czech Republic and France.

To top it off, they most certainly want to end the prohibition. Findings from a recent IPSOS survey  leave no doubts about that. As many as 83% of Italians consider the present law inefficient and 70% of all respondents agreed with the statement that laws similar to those in Colorado (where use and trade are legal) should be passed in Italy.

If the legalisation bill passes, Italy will join the global avant-garde of weed regulation. The first who was brave enough to legalise cannabis was President José Mujica in Uruguay, where pot use has been legal since December 2013. Justin Trudeau vows that we have to wait only until autumn 2017 to legally light up spliffs in Canada. People of Colorado, Washington, Alaska and Oregon have been enjoying this pleasure for more than a year now. Italy would be the first European country with such a progressive cannabis law.

The guidelines of the Italian bill are pretty simple. An adult will be allowed to have up to 15 grams of cannabis for their personal use at home and up to 5 in public. The number of plants one can grow will be limited to 5 per person but people will be allowed to form Cannabis clubs – no bigger than 50 members – growing no more than 250 plants. Trade will be done through shops licenced by the state. Five per cent of legalisation-generated revenues will go to supporting efforts to fight the illicit drug trade. Smoking weed in public will still  be banned.

Calls to legalise weed have been raised on the streets of Italian cities for a long time but now they have been transferred into the proposed bill.

This was made possible by the inter-parliamentarian group of MPs Cannabis Legale initiated by the Senator Benedetto Della Vedova.

Since the 90s Bendedetto Della Vedova has been a member of the Radical Party. In 1999 he was elected Member of European Parliament and served until 2004. Later on he launched the Liberal Reformers (LR) – a libertarian centre-right party. In 2006 he was elected to the Chamber of Deputies on the ticket of Silvio Berlusconi’s Forza Italia (FI). In 2013 he successfully ran for the Senate on the list With Monti for Italy. Besides being a Senator he serves as the Undersecretary of State in the Ministry of Foreign Affairs. He has been campaigning for legalising cannabis for more than 20 years. In 1995 he was arrested for civil disobedience along with Marco Pannella and other Radicals – they distributed marijuana to the public for free. We spoke with Benedetto Della Vedova on the prospects of cannabis legalisation in Italy.

Dawid Krawczyk: It’s no  secret that Italians smoke weed. And they didn’t start yesterday. So, why is the cannabis legalisation bill being proposed right now, in 2016?

Sen. Benedetto Della Vedova: After thirty years of prohibitionist policies, there is a growing awareness worldwide that that the crackdown on cannabis has failed. The consumption of cannabis has grown while the profits in the criminal market have increased. In the US, where the war against drugs was first waged, the failure of this approach is blatant and today the United States are experiencing a paradigm shift. Colorado is testing the legalisation of cannabis and in November, when California will legalise it, prohibition on cannabis will undergo the final blow.

In Italy, even the National Anti-Mafia Directorate, the highest national body in the fight against organized crime, declared that the old model can no longer work and denounced the waste of resources used to prohibit a substance that isn’t the cause of any social alarm. Hence my idea is to put together a broad parliamentary anti-prohibitionist group, independently from the majority-opposition logic, in order to write a law to legalise cannabis. Today, eminent doctors, judges, as well as the most important Italian police trade union support the legalisation of cannabis.

If it passes, Italy won’t be the first country to legalise the recreational use of cannabis. Uruguay did it in 2013. But the government in Montevideo had to face some serious opposition from the International Narcotics Control Board (INCB) whose reaction was very clear – they called out the Uruguayan government for breaking the international law. Aren’t you afraid that something similar can happen in Italy?

Our approach is to legalise specific conducts and cases. Outside this legal perimeter, prohibition and punishment will still remain. In addition to this, we shall prohibit the import and export of cannabis.  All in all, I do not think that the issue would be raised, but, in any case, I am confident that no one would ask to repeal the new rules.

The media reported that in July about 220 MPs and 73 senators signed the proposed law. However this was still not enough to pass the bill. Do you think it is possible to pass it in this parliament?

The bill for legalisation proposed by Cannabis legale has a number of co-sponsors which is unusually high for Italian parliamentary standards. The support inside and outside of Parliament is growing day by day and more and more members of Parliament are ready to vote in favour of our proposal. I’m confident that in the Chamber of Deputies we can achieve a favourable vote. In the Senate the procedure will have to start from scratch but the fact that for the first time a bill on the legalisation of cannabis will be discussed in one chamber of Parliament is in itself a sign that even in Italy cannabis will be legalised.

The point is no longer “if” cannabis will become legal but “when”. If Italy will be the first to go down that road in Europe, we will be able to show the way to other European countries.

You say that the support for legalisation is growing day by day. Among politicians supporting the reform, both members of the left and the right can be found. So, who is for and who is actually against this bill?

While MPs from almost all political parties have signed our bill, there are also those who are against the bill belonging to almost all sides. Those who are most fiercely opposed to legalisation mainly belong to the same cultural and political constituency that, at the time, was against divorce, abortion and later against assisted fertilization or gay unions.

I believe that also in this case history will prove that the reformers were on the right side. I always say that today the categories of politics are not right vs left anymore but open vs closed. Those who advocate new areas of freedom and responsibility for the people, without any prejudice, belong to the field of openness: we do not encourage the use of cannabis, but we think that adults should be free to consume cannabis in the same way that they already use other harmful substances such as alcohol and tobacco.

The opposition to your proposed bill managed to block it from being debated in the Chamber of Deputies on July 25. Conservative MPs lodged more than 1700 amendments to the bill.

It is legitimate to use the tools of parliamentary obstructionism, just as it is legitimate to use every means to oppose and reject those tools. Nevertheless, the submitted amendments don’t concern the substance of the matter but are rather aimed at destroying the bill. We’ll see: those who will have the majority will win in the end.

They can submit other amendments and the legislative process could be delayed forever, couldn’t it?

Do you think that the legalisation bill will come back to the parliamentary agenda in September? I mean, it’s a very tense time in Italian politics, with the constitutional referendum coming up soon.

After the summer break, the parliamentary committees will meet by mid-September and they will define their schedule for the coming months. The consensus in favour of the bill is so high that it will have to be brought to the floor. Parliament can and must do this, whilst fully respecting the timetable of the other issues on the agenda of our two chambers.