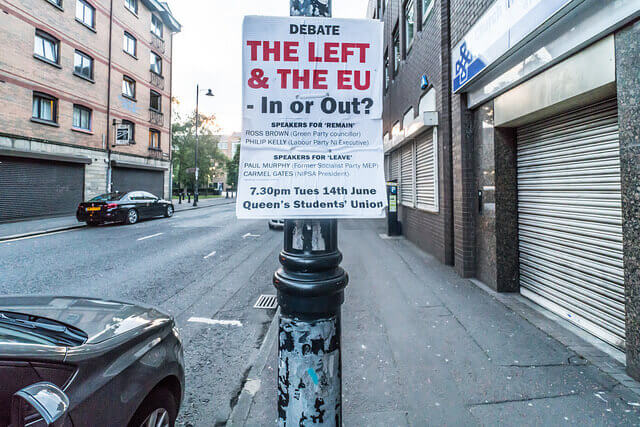 Last week, the leaders of four major British trade unions urged their members to vote remain in the EU referendum, arguing that leaving the EU “would allow the Tory government to dismantle workers’ rights”. We spoke with Mick Rix, a national officer for the GMB union and former General Secretary of ASLEF (the railworkers’ union) about this decision and the upcoming referendum.

Sam Bennett: Maybe we should start with the reasons that the GMB and other unions decided to back ‘Remain’.

Mick Rix: A number of union members of the Trade Union Congress [the umbrella organisation of British trade unions – author’s note] have had a position for a number of years on Europe and especially with regards to a social Europe. A number of us were sceptical twenty years ago of how the future of Europe was being mapped out.

That said, trade unions have been fairly involved in Europe, with all its imperfections. For example, the unions campaigned on a number of key issues that affect workers in the UK today and we’ve managed to get them transposed into legislation at a European level (that has then been accepted at a national level).

The last twenty years have seen the onset of globalisation and the rise of multi-national and neoliberal companies.

The last twenty years have seen the onset of globalisation and the rise of multi-national and neoliberal companies. This brings new challenges and threats. In the UK now, since the crash of 2008, there has been a move to more precarious employment practices – reduced working hours, zero hours contracts, the proliferation of agency and temporary work, increases in self-employed people, the threat of automation. It’s not unusual for people to have 2 or 3 jobs now.

What about the arguments for leaving?

is a national officer for the GMB union and former General Secretary of ASLEF (the railworkers’ union) about this decision and the upcoming referendum.

There is a powerful argument from those on the left about leaving – a lack of democracy, a lack of critical reform, and that at its core, the EU does have a neoliberal agenda. I don’t disagree with those arguments. There is need for substantial change within the EU decision-making process and we’re arguing for greater powers, greater democracy, more social provision.

But fundamentally, if we leave, workers’ rights really will be at the mercy of the Tory government.

There are a number of other considerations as well. We have tens of thousands of members that work in the pharmaceutical industry. We know that if Britain leaves the EU, there will be a mass exodus of these companies who will relocate to India. We’ve got thousands of workers who are employed by firms that do a vast majority of their business in Europe. If we left Europe, it would be harder for these companies to maintain their profit levels and they’d relocate.

You mentioned earlier the rights achieved at a European level – maternity and paternity rights, equal treatment of part-time and agency workers, and the right to paid leave, etc. Would you say that if Britain left the EU, these rights would be at risk of being rolled back by the current Conservative government?

Very much so. We’ve only got those rights because they were agreed upon through Europe.

The leading proponents of Brexit from both the Conservative Party and UKIP have made it quite clear that they want to reel back workers’ rights. Sorry, but we don’t need lectures from Ian Duncan Smith about wage suppression when he was the arch proponent for cuts to social provisions for the poorest and neediest in society.

I remember going to the European Social Forum in London back in 2004 and there was a very positive hope that there could be a social Europe, that another Europe was possible. That seems to have been lost over the last decade.

There’s not been a sensible mainstream debate about what the advantages and disadvantages of Europe are and what we need to fundamentally change in order to make a social Europe possible. That’s been lost.

I think austerity around Europe and the axe of the EU have narrowed people’s views. Most people on the left point to Greece’s experiences as a reason to leave, but you’ve got to remember that the Greek people did not choose to leave the EU. What happened to Italy was perhaps even more worrying. The EU removed a government and now you’ve got a government of technocracts.

Maybe we could go back a step and revisit the decision to vote for Remain. At what level was the decision taken? Was there a ballot of GMB members?

At our congress this year, it was again debated and people came to the realisation that actually we are better off being in, being full participants in order to affect positive change rather than being out and shouting from the sidelines.

If the Government hadn’t backed down on the proposed trade union bill, would it have made the unions’ decision to back remain more difficult or is this separate from day-to-day relations between the unions and the government?

[easy-tweet tweet=”If we leave, workers’ rights really will be at the mercy of the Tory government. “]

I’ve seen some comments on social media this morning where people criticised union leaders for doing this “back door”. Actually, I’d say the unions had Cameron over a barrel here and we could use our power and influence. If you want us to argue for Remain, you’ve got to throw us a bone. Some people may say that’s selling out, but we need to seize the opportunities to advance our argument.

The spectre of the TTIP is lurking in the background and it’s arguably more of a threat to UK workers and union members than Brexit. Do you think a serious debate in the UK about TTIP is being sidelined?

It’s not on the tip of most people’s tongues because most people don’t understand what the threat of it is. ‘Lexit’ supporters (supports on the left for Britain to leave the EU) would argue that TTIP is a good reason to leave the EU, because the European Parliament will endorse it. Which is actually not the case. In reality, it’s up to national governments what they put on the list of industries that are excluded from TTIP’s provisions. Other national governments have added pages and pages of exclusions and I think the NHS is on our list.

I don’t know any labour MEP who will sign up to TTIP and there will be a huge campaign against it. I think it will be problematic.

Where do you think immigration issue fits into the debate? It does seem that it’s increasingly going to be a referendum on race and migration.

There is no doubt that immigration has had a major effect on a number of communities around the country. I’m not talking about social cohesion, but in terms of services etc. There’s huge pressure and of course this is combined with austerity and funding cuts. This fuels the right-wing hate argument of “look what migrants are getting out of the system”.

There are those that, I think, feel immigration and the companies exploiting workers have had effects on jobs and that there’s been a race to the bottom in terms of wages. Is that the EU? The British government? Or is it companies doing what they do? I.e. if they can exploit, they will. There are a number of issues there.

The debate has become toxic and major thing that has confused the issue and turned it into a very toxic argument has been the wider refugee crisis – people fleeing war-torn countries, traffickers and worker exploitation, and of course ISIS.

If there’s one criticism that can be directed at both the Labour party and trade unions, it’s that we’ve not had a coherent policy or narrative on immigration for quite some time.

So finally, I’d like to ask about Jeremy Corbyn. Historically he’s been a critic of the EU and he’s been framed as a reluctant supporter of Remain. What’s his standing with the unions over his opinions on Europe and the strength of his calls for Remain?

There are some that don’t like Jeremy because he’s a socialist and there’s obviously conflict within the parliamentary Labour Party over that. I think his popularity amongst trade unions has increased though.

I actually don’t think he’s reluctant on Remain. I think John McDonnell (Shadow Chancellor) has put forward serious economic arguments for remaining in the EU and he’s been promoting that 2004 feeling of another social Europe is possible.

In the Scottish referendum on independence, Labour made the mistake of campaigning alongside the liberal democrats and the Tories. This not only damaged our credibility, but it also damaged the argument and gave rise to the feeling that politicians are all the same.

The real issue is that the effects of globalisation now necessitate a committed, global social response to that, and you can’t do that in isolation.

This time around, Jeremy and John and a number of others have been very unequivocal in saying that they won’t join the Tory-led Remain campaign. Now, that has meant we haven’t received a higher media profile because of the focus on the internal split in the Conservative Party over Europe. What it has done though is that it‘s pointed out to Cameron that he and the Remain camp really need Labour votes to remain.

Similar to many of us, Jeremy knows the EU’s imperfections, including its fundamental economic philosophy, but the real issue is that the effects of globalisation now necessitate a committed, global social response to that, and you can’t do that in isolation.