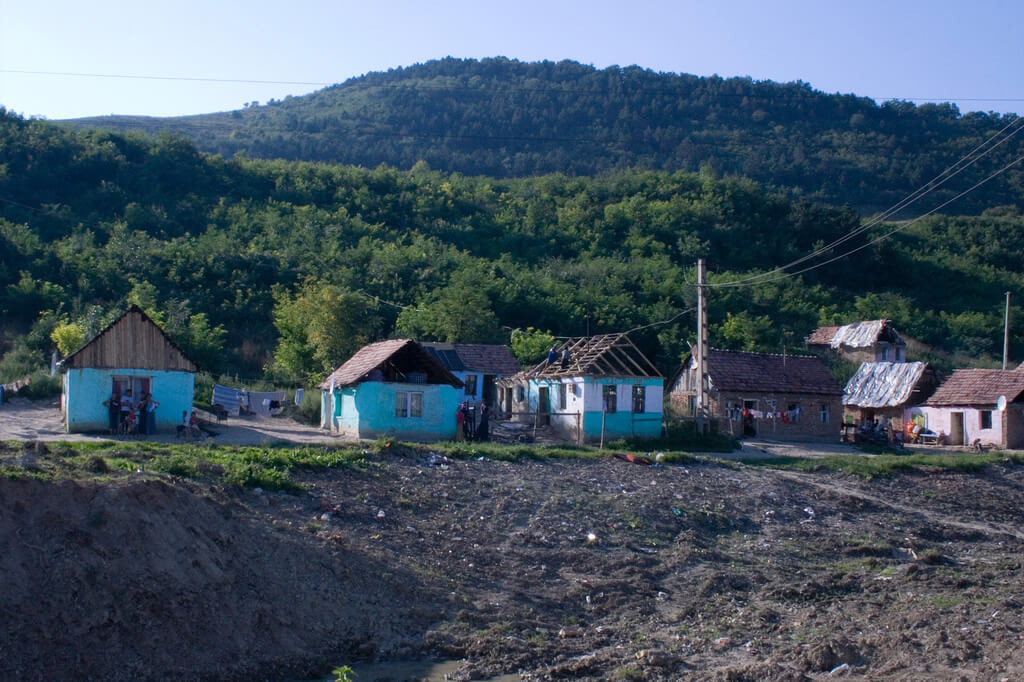 When the newly appointed Romanian Minister of Finance told reporters in an off-the-record meeting that Romanian workers should take a cue from workers in Brazil or India who are ready to work for pennies, she offered one of those rare moments when power speaks the truth. Unintentionally, the Minister articulated both the entire trajectory of post-communist transition and also the current strategy for development of the technocratic government, appointed after the November 2015 protests.

Central and Eastern Europe is for European capitalism what the global South is for global capitalism—a reservoir of cheap and flexible labour.

Neoliberal elites in Eastern Europe after 1989 justified the program of structural adjustments that wreaked havoc in the region, especially among the former socialist working classes, through the promise that such measures are sine qua non for reaching the level of western prosperity. Collective sacrifice was needed in order to leave behind the socialist legacy and reach western standards in a United Europe. In practice, however, the neoliberal recipe led to polarizations, exclusions and dispossessions, especially for the popular classes who footed the bill in the end. After more than a quarter of a century of post-socialism and its attendant polices of neoliberal extraction, countries in Central and Eastern Europe are closer to the Latin American and Middle Eastern peripheries of global capitalism than they are to its western core. Surely, such trajectories are not confined only to post-socialist countries, Greece being a startling case in point of how the EU inherently promotes polarization and dispossession.

By comparing the Romanian workers with those in the global South and not with their counterparts in the EU, of which Romania became a member in 2007, the Minister expressed what critical thinkers and academics have been saying for years: Central and Eastern Europe is for European capitalism what the global South is for global capitalism—a reservoir of cheap and flexible labour. This work force can be mobilized in order to generate significant rates of growth (in the past two years Romania has had one of the highest GDP growth rates in the EU) precisely by virtue of its low payment for the benefit of a few companies, usually transnational. The financial crisis of 2008 helped in this respect by making a cheap labour force even cheaper and even more flexible, while at the same time cutting the last vestiges of social security and welfare.

The Finance Minister made the aforementioned comments as a precise intervention in the debates regarding the minimum wage increase in Romania. From January 1st, 2016, the net amount was supposed to be increased to around 200 euros. The current government, as well as leading politicians and journalists, opposed this measure for fear that it will push down profitability and scare the investors away. Initially the measure was repealed, but following belated albeit important trade union mobilization, the minimum wage will be increased from May 1st 2016.

However, this is largely a symbolic victory since the minimum wage in Romania remains the lowest in the EU, bar Bulgaria, and the increase itself amounted to only 30 euros. Therefore, what was in fact important about the entire debate was not the sum itself but the principle of raising the wages: the government wanted to show from the very beginning that its mission is to continue to keep labour in check and maintain its cost at low levels. The timid pro-demand policies of the former government are thus effectively gone. The decision of the government not to raise the minimum wage was entirely political, not economic, since the effect of the raise on the public budget was negligible.

To understand the dimensions of this political decision we need to place it in a broader context. In 2015 Romania, with a population of about 20 million, had around 6 million salaried employees (around 1,3 million being state employees). 30% of them worked for the minimum wage and about 55% were hired for the medium wage, which is under 400 euros. Thus, about 85% of the entire salaried class in Romania earns between 200 and 400 euros per month (these are gross sums). Only 4% of the employees (200 000 people) earn around 1000 euros per month. 116,000 of them are located in Bucharest, where the biggest concentration of capital is. To put it differently, 85% of the Romanian salaried workforce earn per month significantly less than the minimum wage in Poland (430 euro), while the wealthiest ones earn less than half of the minimum wage in the UK (2295 EUR).

The political decision of keeping wages low is motivated by the fact that low wages fend off labour migration into Romania while continuing to push people out in search for work. Doctors and medical workers are those prone to leave the country, given the huge discrepancy of payment between Romania and other EU countries. About 3 million people have already left Romania in search for work. They send around 4 billion euros per year in remittances, even after the crisis that affected the countries where they live, especially Spain and Italy. Prior to the crisis, remittances were as high as 6 billion euros. This helps to offset some of the costs of living and thus acts as a de facto safety net for those at home. Also, the geographical distribution of the labour force and the internal uneven development of the country ensure that that a pool of people is always available willing to work for these wages. Poor regions in the East and South of the country still generate a steady stream of workers to the capital Bucharest and the rich cities in Transylvania. This unevenness fragments the working class and makes any significant collective action impossible – a fact that poignantly came to the fore when the announcement that the government had postponed the increase of the minimum wage was met for a very long time with silence. Only the loud but politically irrelevant leftist intellectuals reacted to the measure.

The measures to postpone the increase of the minimum wage also signaled a different approach to poverty specific to the new government. In effect, what we might witness now is a departure from neoliberalism to outright social Darwinism as state policy. The new fiscal code adopted last year stipulated that people without income must nonetheless pay for their state health insurance. The contribution was calculated at about 15 euros monthly. The thinking behind this measure was that in this convoluted and quite absurd way (how were people with no income supposed to find 15 euros to pay insurance?) these people could get some modicum form of health insurance. They were supposed to remain in the system.

The new government eventually rejected the measure, and some people read this as a form of generosity. However, as Costi Rogozanu noted, the immediate outcome of it is that people with no income will not benefit from health insurance anymore. Since they don’t pay anything, they will be prevented from accessing medical care. Some people in the government even consider the possibility of restricting access to ER services for those who do not pay. According to governmental estimates, there are about 3 million people in this situation.

The argument of the government is that it is impossible for these people to really have no income. One secretary of state called them “ghosts” and implied that they are just simply refusing to declare their income and pay their due taxes. As such they need to be disciplined and punished by being taken off the health insurance grid. They can benefit from insurance only once they have an income (or decide to declare it).

Being poor becomes a form of moral decay, a flaw of character, something that cannot be (easily) remedied. Only losers can end up in a situation of poverty, not normal people.

One can notice here a palpable change from the neoliberal paradigm dominant during the transition years. In that vision a poor person was simply not taking advantage of the new economic possibilities. The poor were either too lazy or not working hard enough and were still dependent on the state due to some remaining communist “mentality”. Structural adjustments were meant to push these people into the market and make them competitive and willing to work. The former socialist working classes were thus supposed to become entrepreneurs and adapt to the new competitive realities. Remaining poor was therefore the failure to change, a failure that could be addressed through projects of labour re-qualification combined with the slashing of benefits to reduce dependency.This vision seems now obsolete, especially after the financial crisis of 2008 that toned down the optimism associated with neoliberalism as a panacea of transformation for Eastern Europe. Now, if one is poor, this is because that person is not a good human being, there is something deeply flawed, deeply wrong with it. Being poor becomes a form of moral decay, a flaw of character, something that cannot be (easily) remedied. Only losers can end up in a situation of poverty, not normal people. The solution to moral decay is therefore punishment. If neoliberalism, despite its own focus on personal responsibility, still recognized some forms of structural determinants for poverty (for example the legacy of socialism), in this new vision it is only the individual at fault. As such, there is no escape anymore: people who are poor and thus morally corrupt and poor are not people as such. They must be excluded from the community of normal people and thus deprived of any basic rights. They can be left to die.

This is the clear logic behind the new measure of the technocratic government. If you are too poor to afford even a modicum sum to pay for your health services, then you really live for nothing. You should not be able to get any form of health care. Again, as in the case of the minimum wage, it is a matter of principle, not of economics. The sum people were supposed to pay was not so big – not even close to covering any sort of meaningful treatment. It represented just a threshold, separating those who can pay and those who cannot. It was a political decision of excluding about 3 million people from basic health care.

Such a view draws differently the social lines between respectable citizens and poor people – ghost, phantoms, zombies, who just pry on others’ work. This is not simply a form of shaming the poor, or just another example of the war on the poor. It is in fact a form of technocratic rationalization for which poverty cannot exist, or if it exists it is simply an aberration that needs to be dealt with, not resolved.

The problem in Romania right now is not that such a perspective exists and it is state policy. What is worse is that there is no alternative to it. The current technocratic government reflects not only the contempt of the local middle class towards the poor but also the elite consensus that politics is obsolete and technocracy is the only viable form of government. This is only fitting for a government that came to power without elections or popular mandate.

Under such circumstances, political resistance amounts to mere physical survival.

This article originally appeared in Serbo-Croatian on Bilten, and in English on LeftEast.