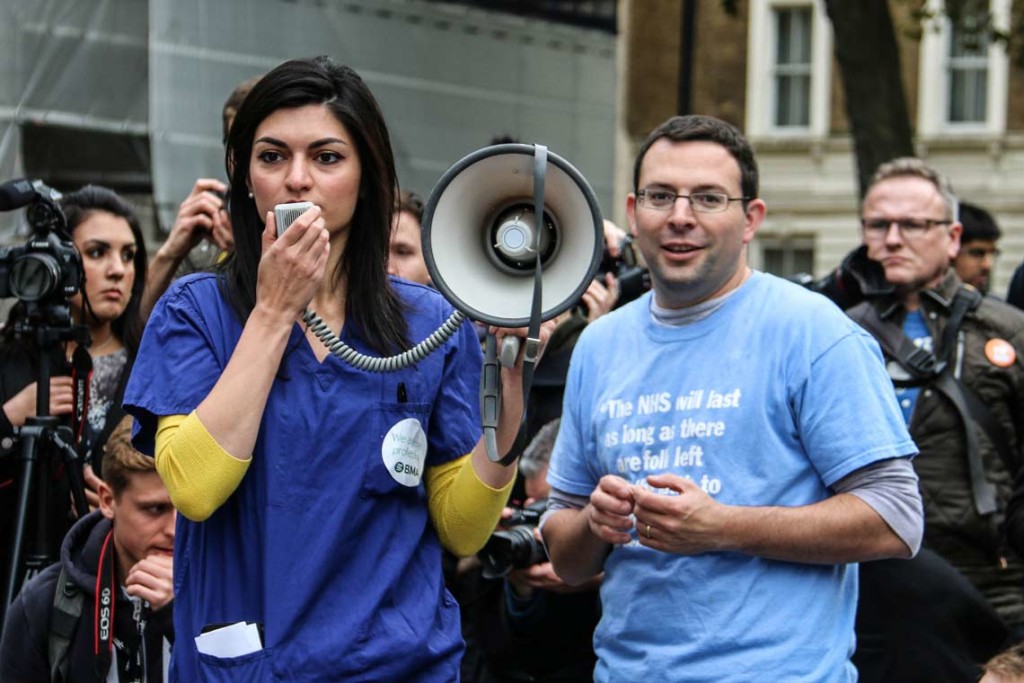 Across England on Monday Junior doctors staged the first planned walkouts in protest against the Government’s threat to impose new un-negotiated contracts, that they say are unfair and would endanger patients.

This is the first time in 40 years that Junior doctors have taken industrial action and it was not a decision taken lightly, with many doctors seeing it as a last resort. Najette, a pediatric doctor working in London said “It’s really unusual for a group of doctors to be this politicised. We’re a not normally a political group at all. Fundamentally we’re a group that does this job for our patients not our egos and I think for us this [walkout] was the only solution unfortunately”.

The British Medical Association (the Trade Union for doctors in the UK) has said that unless Ministers remove the threat to impose the new contracts, they will not return to the table and continue discussions.

The imposition of new contracts could trigger many Junior doctors to leave the NHS. A survey of 4,000 junior doctors in 2015 found that 70% would either move abroad, become locums or leave the profession altogether.

This would be disastrous for the NHS as it comes at a time when it is under increasing pressure. The ever tighter squeeze of ‘austerity’ politics has seen spending cut across public services. Since 2012 the NHS has been forced to make 4% cuts in spending annually. According to the Nuffield Trust, combined with unprecedented demand for NHS services, this could lead to a shortfall in funds of up to £50bn by 2022.

The doctors who currently sacrifice a majority of their personal time and commitments would be punished, penalised and disadvantaged.

A key pledge in the Conservative government’s 2015 election manifesto was to introduce a ‘true seven-day NHS’. Jeremy Hunt, the Secretary of State for Health, said that the current contract meant “we have three times less medical cover on weekends because hospitals can’t afford to roster enough people”. In order to combat this, the government wants to cut out-of-hours pay by reclassifying some working periods that currently count as antisocial and therefore qualify for extra pay.

However, the BMA argues that the government has so far failed to offer contractual safeguards on safe working and proper recognition of those working unsociable hours.

Bea Bakshi, a member of the BMA’s Junior doctors’ Negotiating Committee said “it’s a question of fairness and valuing the work that Junior doctors do. The doctors who currently sacrifice a majority of their personal time and commitments would be punished, penalised and disadvantaged” by the new contracts.

Maybe more importantly, though, those on strike on Monday argued that the proposals would pose a real risk to patients. Claire, an aesthetic registrar with 10 years’ experience, said that new contract was “the greatest threat to patient safety” since she had been working in the NHS. “Withdrawal of any kinds of safeguards against the length of junior doctors’ shifts is frankly frightening. There would be an increased danger to patients from tired and overworked staff”.

In response to the Government’s rejected proposals, those on strike are calling for a contract that would pay them fairly, ensure a safe number of work hours, would not disadvantage those not on fulltime contracts or on parental leave, and which would provide cover at weekends and at night, whilst also recognising the right to family life.

Dr Johann Malawana, BMA junior doctors committee chair, said “With junior doctors attending more than 150 pickets today’s action sends a clear message to Jeremy Hunt and David Cameron. Junior doctors in their thousands have made it quite clear what they think of the government’s plans to impose contracts in which junior doctors have no confidence. We want a contract that is safe for patients, fair for juniors and good for the NHS. It is well past the time for Jeremy Hunt to take account of their fears and frustration and listen to what they are saying”.