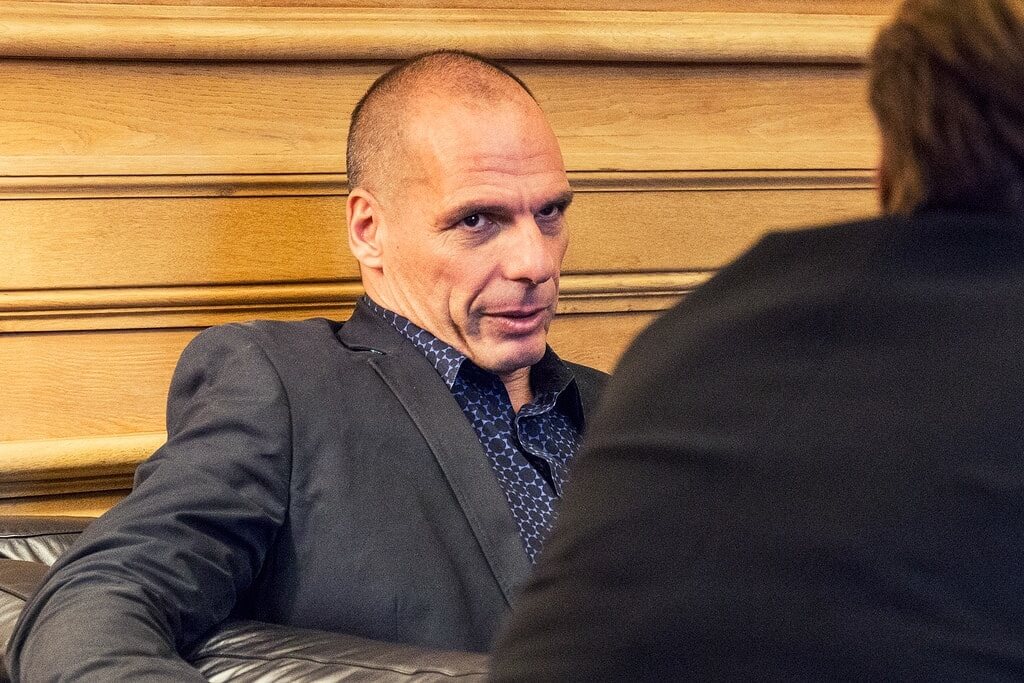 Varoufakis has a plan. He also has many supporters behind him and a story about a Europe which not only has to be, but also can be saved. The question of the day is whether his plan, his supporters and his story will turn into a movement, one which is now only in its ‘conceptual’ phase. The next question is whether this movement will be able to deliver a political turn similar to Roosevelt’s New Deal of the 1930s. Irrespective of how his followers understand him, this seems to be Varoufakis’s point, and not some fantastical revolution of the precariat built up from the ruins of the European Empire.

[easy-tweet tweet=”Varoufakis reminds right-wingers that what is at stake today is liberal democracy itself. ” user=”krytyka”]The plan is simple and founded on a consistent interpretation of economic theory. But it’s a Keynesian rather than a Marxian theory. Despite Varoufakis’ rhetoric of ‘class conflict’, horizontal democracy and bringing politics back to the people, it’s the Cambridge technocrat, rather than the Trier revolutionary, who motivates the vision of this Greek ex-minister of finance.

Let’s start with the economics: recession and unemployment in the Eurozone results from lack of investment. It sounds trivial but it’s actually backed up by a specific idea: the output gap (the difference between the current investment level and the investment level necessary to generate full employment) is to be closed by public investments which will swing the economy into top gear provided by the European Investment Bank. Large-scale investments – Varoufakis speaks about 5% of the EU’s GDP – are to be financed with bonds guaranteed by the European Central Bank.

His supporters will claim that this is a Keynesian fiscal policy, and that it will not only provide a stimulus for the economy (employment!), but also enable a structural transformation (because this ‘green New Deal’ will be financed by the EIB). Yet his opponents will say that ‘natural economic laws’ will cause his plan to backfire on the money printers (and, as a result, on the savings of citizens), resulting in hyperinflation. However, in the current circumstances, to which Varoufakis is referring, this seems to be a very low risk. This is because the EU economy has a lot of under-utilised factors of production, including millions of unemployed young people of the best educated generation in history. The printed money will not have an inflationary effect until the economy is at full employment (i.e. when additional money would raise prices) or, alternatively, when instead of increasing our domestic output we purchase and import additional goods (making foreign debt rise). A state of full employment is still a distant prospect, and the EU’s trade balance is close to equilibrium (and the possible fall in the euro exchange rate – which Varoufakis’ plan may result in – would actually facilitate European exports).

Furthermore, the expected reduction in unemployment rates improves the bargaining position of working people (thus reversing the tendency as a result of which one might say labour isn’t working’) and, for this reason, increases the odds of retaining growth-friendly politics. So, then, everybody is happy; people are working instead of hurling petrol bombs at the police, businessmen are selling their goods, the EU is growing in strength, and we all live happily ever after.

It seems simple, right? Unfortunately, there are some problems. Varoufakis articulately explains why social movements originating in the labour movement are so weak. It’s hard for them to be strong when there has been a race to the bottom in the labour market for many years, while investments (except in the virtual world of financial markets) are few and far between. After the Second World War (in the US a decade earlier) the trade-union movement in the Western world was on the rise: experts in Keynesian ‘demand management’ policy only offered union members a cut-and-dried notion of how to increase worker’s living standards. The industry elite were ready to accept this social contract: a fair share of the fruits of growth for workers in exchange for social peace. The deal was facilitated by the post-war solidarity of national communities, general yearning for stability and, above all, both the spectre of communism and (less spectral) Red Army tanks on the Elbe. To put it briefly: there was a theory of just how to redress capitalism, there were institutions (mass parties and trade unions) ready to fight for it, and there was the threat of an alternative, and more daunting, scenario.

Varoufakis directly alludes to this epoch. He recalls the tragic consequences of mistakes made by German social democrats and Christian democrats in the early 1930s (when budget cuts were seen as a solution to the crisis) and reminds right-wingers sceptical of the left that what is at stake today is liberal democracy itself. If you want to defend your Weimar, reform it leftwards, or the fascists will put you, and us, and our entire EU straight. This is his alternative ‘spectre of communism’; not Marx’s revolutionary utopia but the nightmare of the post-war establishment).

It’s not certain that this spectre will be convincing, and threatening, enough. While the Brussels technocratic-liberal elites may not love Orban and Kaczyński, big business and less politically correct media will survive the possible nationalist-conservative seizure of power. Especially the ‘rational’ right, such as Marine Le Pen or Horst Seehofer, who will kick the immigrants back to the other coast of the Mediterranean Sea but they will not do any major damage to capital.

Given the weakness and disorganisation of labour (especially now, at the beginning of Varoufakis’s desired reform), the current balance of political forces doesn’t bode well for this potential movement of an incipient trans-European left.

Varoufakis’s vision of social Europe could, theoretically, elicit much sympathy from the world of business; especially those from the ‘real’ sector, where unemployment, poverty, and lack of aggregate demand are much bigger problems than the spectre of inflation and potential increase in interest rates. However, the project announced in Berlin may hit a brick wall similar to the one from the 1940s described by Michał Kalecki. Although in theory everybody should care about investment increases and peak industrial growth this is not the reality. The expansion of state intervention (or, at least, one led by EU institutions, it should be made clear) and empowerment of labour will not be acceptable to the owners of capital , even those who (like the industrialists) really deserve to be called ‘entrepreneurs’, not to speak of the rentiers at this juncture. To this list of the opponents of ‘Varoufakis’s option’ we should add all those who are lobbying for the trade and investment partnership between the EU and the US, a partnership which the Diem 25 manifesto argues against through its demand for “transparency” as an indispensable point of departure for democratic reforms.

Given the weakness and disorganization of labour (especially now, at the beginning of Varoufakis’s desired reform), the current balance of political forces doesn’t bode well for this potential movement of an incipient trans-European left. Last but not least, it’s worth bearing in mind until The General Theory of Employment, Interest and Money and Keynes’ practical concepts became familiar in Europe and accepted by the ruling elite, that their author died of over-work, and there was the Second World War. Are the contemporary elites in Europe any wiser? The fact that Varoufakis has relentlessly been presented as a Greek nationalist, although in all actuality he’s a radical supporter of social federal Europe, doesn’t suggest any extraordinary openness on the part of the establishment. However, his leftist Euro-enthusiasm can be difficult to stomach for his devoted supporters as well.

The most difficult part of Varoufakis’ vision is a social movement that was meant to be – in its function of forcing change – an equivalent of the former representation of working people. The movement is to be ‘completely horizontal’, of course; democratic, participatory, with no central committee and each participant co-managing it through a smartphone app. This kind of language is well known and well-liked among the ‘progressive youth’ and the author of The Global Minotaur knows this perfectly well. Varoufakis uses slogans appealing to a general sense of indignation with great frequency and conviction. The problem is that the hyper-horizontalism of the movement he envisions may be inconsistent with the agenda he has already devised, however convincing it could be for the progressive technocrats. His comparisons to the 30s, and the emphasis he places on the role of specific institutions in the economic section of his argument, suggest that Varoufakis believes that the Frankfurt, Brussels or London technocracy should be opposed by the left’s own technocracy, one focused on stimulating investment, egalitarian redistribution, green transformation, etc. But will the horizontal movement be really open to such an opportunity? Or, perhaps, it won’t really be as horizontal as it claims to be. A cynic would say that the most valuable art in democracy is persuading the people that an idea devised by their leader orginated in fact with them and has been forced upon him by their will.

Concern about large-scale migration has displaced the debate about economic alternatives that, no more than a few years ago, seemed to be thriving.

There is a host of challenges that this movement must face. They include translating, if not reconciling, the perspectives of people from varying classes and backgrounds, and, especially, from different nations and regions in Europe; from Lisbon to Tallinn at least, and at best, Kiev. I don’t know how many radical (or at least progressive) communities of southern, eastern and northern (!) Europe are ready to fight together for a ‘Keynesian’ ECB mandate, EIB investment priority reform or the change in the operating logic of the European Stability Mechanism. And all this while retaining (and perhaps extending?) a reformed euro; because the Diem25 manifesto intends to exclude advocates of the return to national currencies. I also don’t know if Varoufakis will manage to convert the complex tension between the ‘bad’ establishment of today’s Frankfurt and Brussels and a potentially ‘good’ EU socio-technocracy into sufficient energy to spur people into action and make this social movement both mass and influential.

The opening of the minds (and later the wallets) of the establishment to the claims of a social movement is a much more difficult thing to pull off. The ‘haves’ of the world don’t have anything to fear as long as the far right is the nemesis of refugees, the unemployed, women or weak minorities. Unfortunately, concern about large-scale migration has displaced the debate about economic alternatives that, no more than a few years ago, seemed to be thriving. What does it all mean? Varoufakis wrote a book about a business Minotaur, transposing the archetype from ancient Greek mythology into the 21st century. The Greece he was co-governing has got lost in the Minotaur’s labyrinth. Yet, if he succeeds in making a movement that can harness this monster, history will create a legend of him.

Translated by Bartosz Lutostański. Special thanks to Hannah Connel.

The text written by Michał Sutowski and translated by Bartosz Lutostański is licensed under a Creative Commons Attribution-NonCommercial-ShareAlike 4.0 International License.