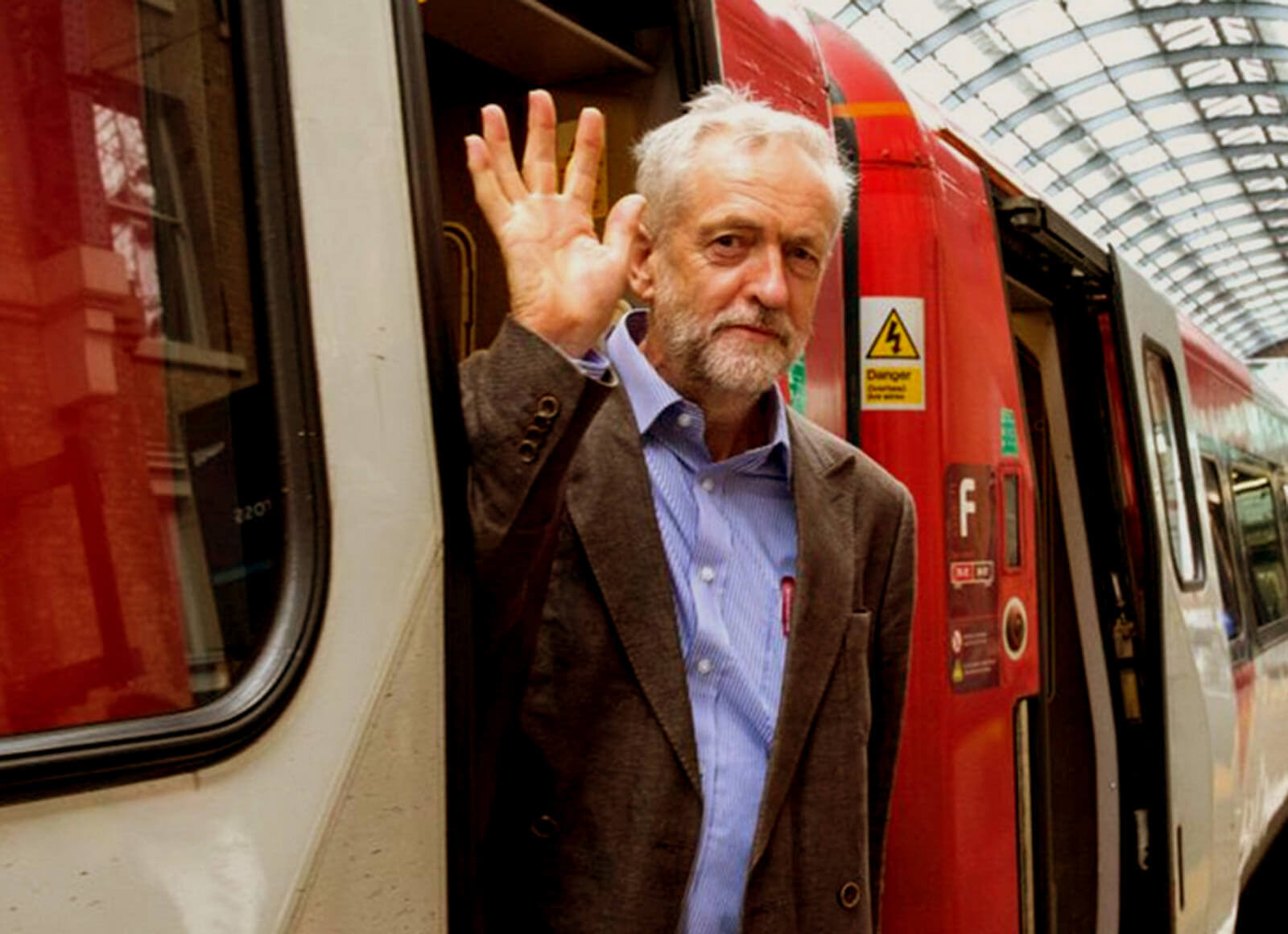 Jeremy Corbyn, the Leader of the Labour Party, flickr.com

Veronika Pehe: What is the Labour Party’s official position on the upcoming referendum, in which voters will decide whether Britain should remain in the European Union?

Matthew White: The Labour Party made a decision at the last party conference – which was also when Jeremy Corbyn was announced as the party’s new leader – that the official policy would be to campaign to remain in the European Union.

When did you join the Labour Party and what motivated you to become part of this campaign?

is campaigning in Tottenham, London for Britain to remain in the European Union as part of the Labour Party’s IN campaign. He works as a freelance copy editor.

But I would also take a historical perspective, which is something I think hasn’t been emphasized very much in the campaign. Historically, European nations have repeatedly gone to war with each other. Nowadays, people will look at that and say: that was then, the European Union was created in order to stop that happening, but we don’t need the EU anymore, the idea that there would be another war with Germany is ridiculous. I would argue the opposite. The very reason another war seems incredibly unlikely is that we’ve built institutional conventions that link European countries. The elites of individual countries work with each other on a daily basis. It is naïve to suggest that if we leave the European Union, and indeed if the EU starts to slowly fall apart, relations won’t deteriorate. We need to cherish what we’ve got now.

What are the main arguments in Labour’s campaign?

The Labour IN campaign has three headline arguments: that jobs and workers’ rights depend on EU membership, that Brexit would lead to the loss of our biggest export market and that Britain is more secure in Europe.

How is Labour’s campaign different to the arguments of the Conservative Party, who are also officially advocating remaining in the EU?

It is naïve to suggest that if we leave the European Union, and indeed if the EU starts to slowly fall apart, relations won’t deteriorate. We need to cherish what we’ve got now.

First, I should point out that the Conservative Party doesn’t actually have a position on Brexit. Cameron has freed his MPs and cabinet ministers to campaign on either side. The other main group campaigning to remain, “Britain Stronger in Europe”, is a cross-party grouping. It’s difficult to pin down the differences between the two campaigns, with “Stronger in” pretty much echoing the three main points of the Labour IN campaign. However, Jeremy Corbyn’s statements on the issue certainly have a different emphasis. For a start, pro-Remain Conservatives are emphasising the deal that Cameron negotiated with the EU, according to which EU migrants’ access to benefits was restricted. Jeremy Corbyn’s position is that this is actually not a good deal, but we should remain in the EU in order to negotiate to protect workers’ rights not just in Britain, but across Europe. It is the EU that gives us the best chance to do that. And I would agree with that.

On the Conservative side, sovereignty – the idea that the EU is a threat to Britain’s national interests – has become the buzzword of the debate. But don’t some parts of Labour also share this language?


I’m quite surprised, actually, that the Leave campaign on both the Left and Right converge to an extent. On the Right, the campaign is nationalist in the sense of believing in the nation: it suggests we need to leave the European Union in order to regain control of our borders, and for British businesses to stop being held back by European regulations. The other side believes that we need to leave the European Union because it is a neoliberal institution and when Jeremy Corbyn wins the general election – the argument goes – we will build our wonderful socialist utopia here in Britain, but the EU won’t let us do it because it’ll be illegal. Those two arguments have a lot in common. It’s strange to see the Left and the Right both arguing that Britain will either be a liberal utopia or a socialist utopia if we leave the European Union – they can’t both be right, can they? And I don’t think either of them are.

How do you evaluate Jeremy Corbyn’s positon? He was on the fence for quite a while and did not come out in strong support of remaining in the European Union until recently.

Yes, and I would urge him to get off the fence and argue more strongly for Britain to stay in the European Union. As far as the Labour campaign goes, the Party have got other fish to fry at the moment. In particular, the mayoral election in London is coming up, which is very important. So at the top of the Labour Party, at least for the moment, they’ve decided that we’re going to campaign for Sadiq Khan to win the mayoral campaign, and once that’s done, we’ve got seven weeks to campaign for the referendum. As Labour’s campaigners on the ground, we are biding our time at the moment, because there’s not really much money or support coming from the centre right now.

So what is going on at present in terms of the campaign on the ground?

At the moment, each constituency of the Labour Party has selected an EU officer who will campaign for staying in the EU. The problem is that although Labour is officially campaigning for in, there is a huge amount of scepticism for the EU within the party. Some of them may even be in favour of Brexit, but they know what the national party’s positon is and they don’t want to sound like Ukip. But at the same time, they don’t want to be seen standing next to the Conservatives or even the Liberal Democrats – the Labour Party was shaken by what happened during the Scottish referendum, during which they did exactly the same thing – they stood on a platform with the Tories and the Lib Dems in order to argue for Scotland to remain in the United Kingdom, and although they won the referendum, the Labour party was almost completely wiped out electorally in Scotland in the subsequent general election.

But I think there is another aspect to this scepticism, in particular what has been happening recently in regards to Greece. Some would say that the way Greece has been treated is terrible and that the European Union is effectively a criminal organization which we can’t be part of it. I would argue differently – we can’t just leave the European Union and live on our own. Even if you could create a socialist utopia in Britain, we shouldn’t do that, we should try to change the European Union for the better. It’s better for Britain to work with the Left in Germany and indeed the Left in other countries to create a wider European Left movement.

Would you agree that there has been remarkably little of such an international outlook on both sides of the campaign?

It’s strange to see the Left and the Right both arguing that Britain will either be a liberal utopia or a socialist utopia if we leave the European Union – they can’t both be right, can they?

We’re all conditioned to be nationalist, aren’t we? We haven’t all read Benedict Anderson’s Imagined Communities. A big problem is that when you look at the polling data, Leave voters are much more likely to go out and vote, while those supporting Remain are much less likely to do so. This is because the Leave argument has a much better hook for the emotions: we want to be our own country, we want to govern ourselves, we don’t want to be part of Europe – that works. Whereas trying to find an argument that has that kind of emotional hook to stay in the European Union – it’s hard.

So you are finding that the idea of Europe as a valuable thing in itself is not a mobilizing force?

It is for me. The idea of less borders, of not being stuck within the constraints of national thinking, that is very appealing to me and many people I know. But lots of people find it less appealing. It’s very hard to convey that in a way that will capture the imagination of enough people. That’s why I think the Remain campaign isn’t pushing the emotional argument, but is instead talking in practical terms about jobs, about security, and so on.

How is the campaign going to be organized on the local level?

Knocking on people’s doors will be one thing, handing out leaflets at Tube stations another. I think the key thing for us in Tottenham is that in such a diverse borough, people will not be voting Leave, they’ll be voting to remain – but the difficulty is turnout. There will have to be a huge effort on Referendum Day itself. We need to identify people who are unlikely to vote, knock on their doors, and ask them if they’ve voted yet. Persuading people to register to vote is also important. And that’s particularly significant in an area like Tottenham, where people are accustomed to their vote not counting. Tottenham is a solid Labour constituency, David Lammy won 67% of the vote at the last election. No one really campaigns in the general election in Tottenham, because it’s a done deal that Labour will win there. People are used to not needing to vote, they think that they can’t change the results. But when it comes to a different kind of election where every vote counts, we’ve got our work set out ahead of us trying to get these people to cast their vote in the first place.