In your latest book The Lure of Greatness you argue that Brexit was an English phenomenon. Can you explain what you mean by this?

Brexit and Trump were explosions. Each was the result of both a revolt against and a breakdown of the existing order. A number of causes were at work. But the detonation came about through what I call ‘combined determination’. This means I don’t accept that there is any one primary determination. I oppose a Marxist view that it was caused by economic factors, although these were essential. Or a Brexiteer or Trumpite view that they were caused by honest rejections of rigged and elitist systems. Certainly, both mattered; both economic forces and freely judged opposition to a rigged system.

But it was the way the forces combined that made the mixture explosive. Forces such as the loss of popular trust in historic states, caused by strategic military defeat and the catastrophe of the financial crash. The elites of Washington and London lied, lost, went bust and then bailed themselves out while everyone else got poorer and more insecure. That was a big cause. So too for Brexit was the undemocratic nature of the EU. So too was the absence of a left-wing, democratic alternative for Europe – an opposition to the EU within the EU. This allowed the right to monopolise and distort criticism of the EU. All these were also essential parts of the explosive mix.

However, in Scotland which has its own parliament and in London which has its Mayor, there were large 20% majorities for Remain, despite these factors. Across England without London, which is far more populous, there was an 11% majority for Brexit. So, simply put, as an observable fact, it was this English vote that took the UK out of the EU across every region, rich and poor. The only reason I need to ‘explain’ this, is that almost no one wants to talk about it.

Why not? Well, the BBC for example, which is the country’s main news provider is the British Broadcasting Corporation. There is a BBC Scotland, a BBC Wales and a BBC Northern Ireland, but there is no BBC England. The BBC followed the official edict that the referendum was a ‘British vote’. English frustration does not express itself as a desire for an English parliament, for example, but as a longing for a return of an Anglo-Britishness that ruled over others and made them feel ‘great’.

There is a widespread perception that the UK as a whole, but especially England, is somehow, for some even intrinsically, anti-European. Where does English Euroscepticism come from and how deep does it go?

There are three parts to my answer. First, many English feel frustrated with not being represented and take this out on the EU, it is a kind of displacement with their own sense of loss. This is not so much a matter of identity as an institutional weakness. You can look at it like this: The United Kingdom is an old, multi-national entity with an informal, uncodified constitution, with absolute sovereignty. The EU is also a multi-national entity, only it is young and constitutionalising itself and sharing sovereignty. The UK cannot but be threatened by being inside the EU. It challenges ‘what we are’ as a country’. In this sense, the United Kingdom as a state is intrinsically non-European.

Second, while there are good reasons to be sceptical about the way the EU is run and to demand its reform, Anglo-British Euroscepticism does not really stem from a judgement about the EU or from vile prejudice against our neighbours. There are elements of both, but the main source is structural. Although the Empire is long gone, the British retain what I call an Empire state. The rest of the continent has – more or less – reconfigured itself after the Second World War. So too has British society which has renewed itself and is energetic and contemporary. But the political system and its culture is still largely unchanged.

Third, during the Cold War when it could still think of itself as a power the political media class remained proud of itself. But 1989 was a turning point. I suggest in the book that Prime Minister Thatcher’s opposition to German reunification was a disastrous moment for the UK’s current feeling towards the EU. Europe moved on from the Second World War and the UK did not. The result is a resentment of the EU and Germany from the political-media caste which is orchestrated into anti-Europeanism. I don’t think it is very deep or widespread. 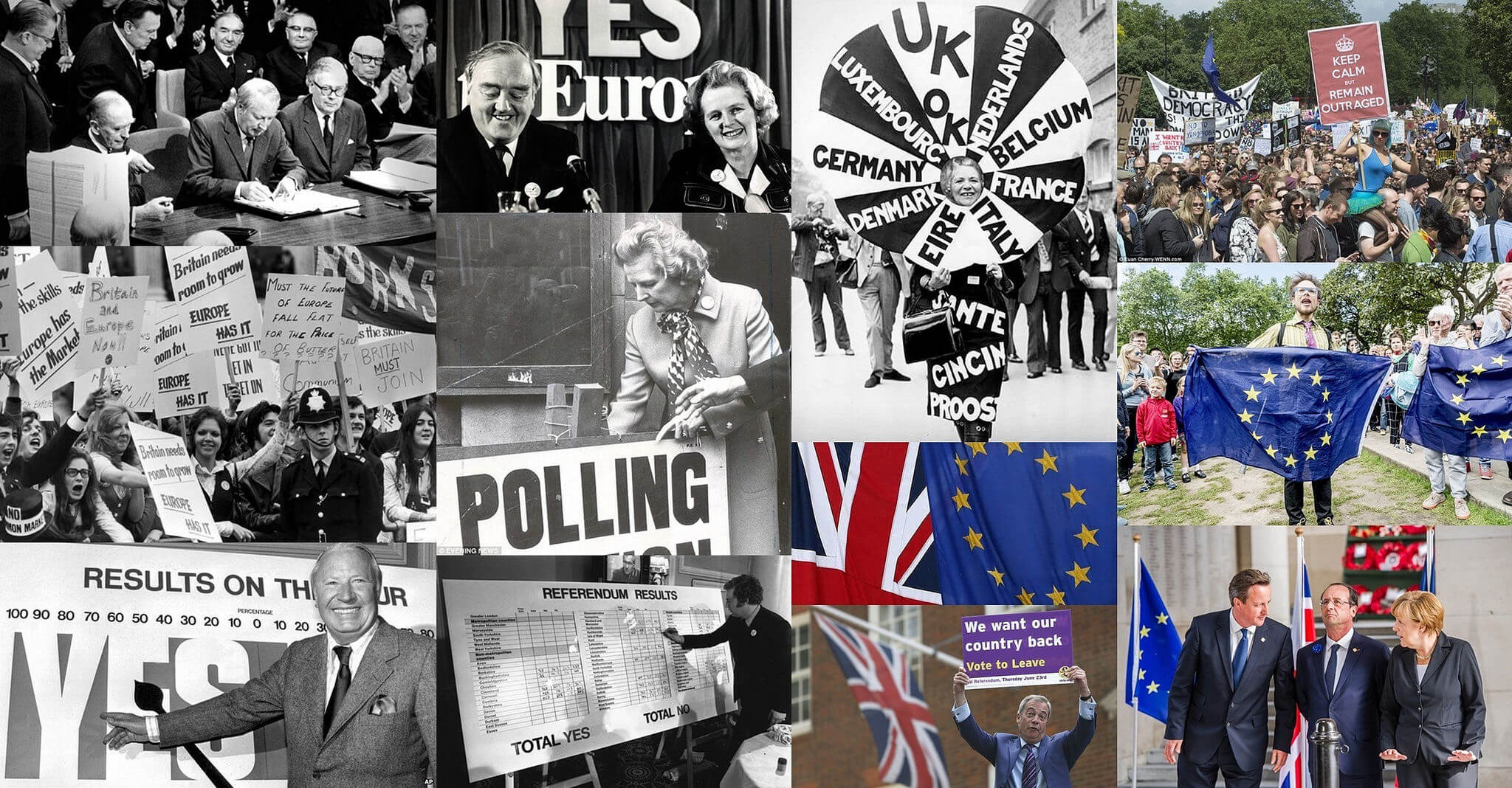 As a self-professed English-European, critical of the deceptions and sometimes bad logic behind Leave, you nonetheless sympathise with the democratic urge behind the vote. What do you mean by this?

The Brexiteer lied and stirred. I mention in particular the shocking maps with arrows purporting to represent hoards of Turks flooding across continental Europe to settle in the UK. But the Remainers were a regime of deception too, screwing the rest of us supposedly for our own good. For many, elections had long ceased to been meaningful choices as the gap between the parties narrowed. Suddenly, with the referendum they were offered a real choice. Many took as asking them, ‘Do you want to carry on being governed as you are?’ Quite understandably many said ‘No!’.

The problem is that this democratic impulse was imprisoned by right-wing demagogic politicians and media. Put it this way: on both sides the issues were posed in a profoundly deceptive fashion. But on both sides voters considered their position, smelt the lies and deception for themselves and made a call. These were real acts of agency. Those for Brexit were in part demanding self-government. Any democrat must respect this.

Meanwhile, among the elite, the current negotiations seem to be falling to pieces. Why do you think this is? Is it the incompetence of the UK negotiating team? The belligerence of the EU? Or both?

Brexit is a breakdown of British government. The Tories who are in office are deeply divided and are led by a Prime Minister who wants to stop them from being divided. The basis of the division is clear enough. There are those who accept the UK should leave but want it to stay as near to the EU as possible and remain within its regulatory space. And those who think this makes the whole thing pointless and want as thorough a break from the EU as possible. May has refused, so far, to take sides for fear of what the other side will do. The UK government’s entire approach to Brexit is misconceived and unforgivable. As for the EU, it watches with bemusement as the UK damages itself while it aims to get as much of London’s business as it can.

In the midst of this undemocratic, closed-off conversation, what can other English Europeans, and indeed Europeans of other nationalities, do to challenge the version of Brexit that is unfolding?

What is the version that’s unfolding? I don’t know. We should all do is everything we can to stop Brexit and lay the basis for reversing it if is carried out. To my fellow Europeans I say, do anything you can to encourage the Brits to see that the EU is a space where government is possible and change to the EU can happen.

Jeremy Corbyn’s Labour party seem to have gone back and forth in their attitudes to the EU and Europe. Do you think a Labour Brexit would be significantly different to a Tory one? Is the Labour party, with its many progressive policies at a national level, an adequate institution for broadly left-wing internationalists to support?

Labour has for the moment overcome its divisions and declared it is for a ‘Labour Brexit’ that will retain access to the single market and protect jobs and trade. Is this possible? Are its leaders really determined on Leave or are they merely permitting the Tories to tear lumps out of each other until an opportunity opens that will allow them to intervene. Some seem to want a Lexit and left-wing exit from a capitalist club, as if social democracy can be created in one country by an Empire state! As yet, Labour has not committed itself to the democratic reforms of the UK that will Europeanise it, such as a codified constitution. Except that Labour now has over 500,0000 members which alone is a shape-shifting development. So, I have an important message to those concerned about the future of Europe who want the UK to stay. Come here and talk with people, especially those in the Labour Party. They need to meet Europeans.

Key to the success of this will be the continued mobilization and pressure of Momentum. How do you understand the composition and politics of this new force in British politics?

Its extraordinarily promising but very young, only two years old, and feeling its way. Its importance is that it is a ‘horizontal’ network in a hierarchical party. So it resists being captured by the usual routines. It allows the party to become a vast, practical think tank. Will it be ‘ideas led’ and develop a culturally creative politics that can challenge the baleful competitive individualism of neoliberalism? This was one direction being argued at The World Transformed, the parallel gathering alongside the Labour Party’s annual conference. I think reaching out to it is important. Socialists across the continent, to go back to your previous question, should link up with those in Momentum, come and see them, invite them to visit, Europeanise it!

What scope do you see for England to become a ‘normal’ European country?

A lot! If the breakdown carries on the United Kingdom will either split up or become a confederation of equal countries. Then England will be normalised. Don’t underestimate the energy and inventiveness of the English. Once Westminster has been sloughed off, England will be potentially very attractive. There is plenty of scope. But when? Oh when…

How does Europe have to change if it is to survive the proliferation of populist opposition from various parts of the political spectrum?

I support DiEM 25, it is developing the first trans-European strategy of an inventive and progressive kind. We are still reeling from the collapse of social democracy after its leaders scooped it up into the interstices of neoliberalism. The result is a terrible failure of solidarity. I was in Puerta del Sol in 2011 to witness the rising of the indignados. It was an inspiring, genuinely 1968-like movement. But did France come out in support? I was in Athens for the referendum in 2015. As young Greeks sang songs from the wartime resistance in a crowded, joyous Syntagma Square, the leader of the German Social Democrats harshly condemned what was a legitimate democratic process. Varoufakis said then, “Today’s no is a big yes to democratic Europe.” Alas, there was no such democratic Europe. There needs to be.

*The Lure of Greatness, Anthony’s book length dissection of the Brexit and Trump votes, is available to purchase here.

**Anthony will be speaking about the above and more in London on 31 October in a public event called ‘Can we return to Europe?’ alongside Caroline Lucas MP, Clive Lewis MP, Suzanne Moore and John Harris. Tickets are available from Eventbrite.