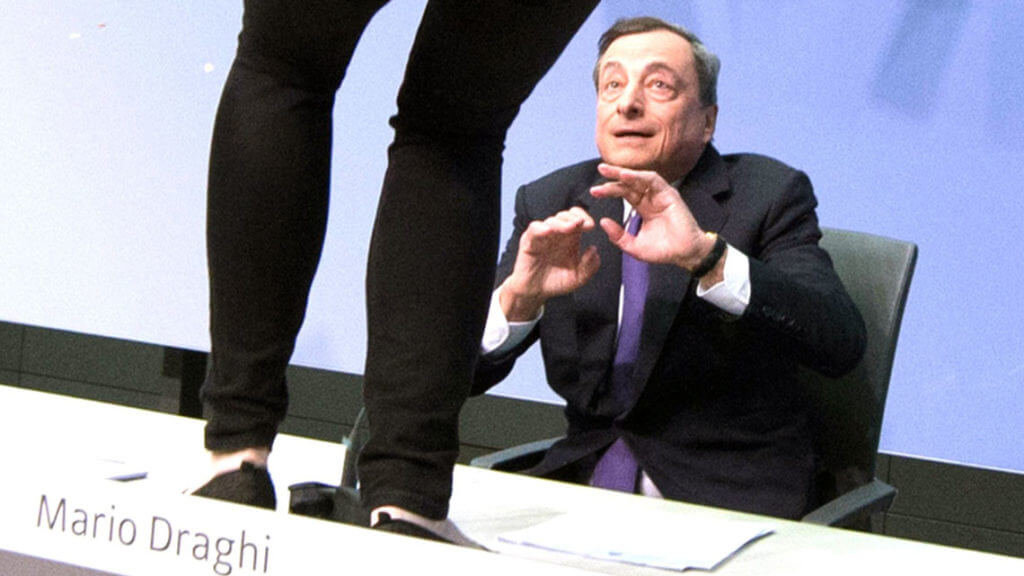 'End the dictatorship of the ECB!' An activist confronts Mario Draghi in 2015.

In 2015, the European Central Bank (ECB) forced Greece’s banks to close as part of the attempt by the troika of its official lenders (the ECB, the European Commission and the International Monetary Fund) to prevent the newly-elected Greek government from doing what it had been voted in to do: renegotiate the country’s public debt, fiscal policy and reform agenda.

Following the closure of the banks, capital controls were imposed on Greece. These are still in place, with widespread social and economic costs for its already-ailing economy.

We know the ECB commissioned a legal opinion on the legality of those actions. And we want to read that opinion, but the ECB refuses to make it public.

Mr Draghi, if you acted legally, according to EU Law and the ECB charter, why do you not release the legal opinion you commissioned over the ECB’s actions that led to the closure of Greece’s banks?

We pose this question because the ECB has the exorbitant power to close a Eurozone country’s banks. Exercising this power with decisions made behind closed doors by unelected officials is inconsistent with European democracy. The least Europeans can expect is access to legal opinions that they have paid for regarding the exercise of the ECB’s enormous power. Your refusal, Mr Draghi, to grant citizens access to such legal opinions enrages Europeans and is a great gift to the forces of the Nationalist International inimical to the European Union.

Democracy and transparency are not luxuries. They are essential for Europe’s survival. To this effect, a broad alliance of politicians and academics have announced they will support a mass freedom of information request to the ECB, to be submitted by Yanis Varoufakis (DiEM25) and Fabio De Masi (MEP, GUE/NGL), demanding the publication of the ECB’s legal opinion. We call upon democrats, wherever they may live and irrespectively of their party’s political allegiances, to support this mass freedom of information request by signing DiEM25’s petition.

This campaign is just the beginning of a long struggle for transparency and democracy in Europe.

Yanis Varoufakis and Benoit Hamon
Yanis Varoufakis is an economist who was the Minister of Finance in Greece from January 2015-July 2015. He is a co-founder of DiEM25 (Democracy in Europe Movement 2025). He authored the books 'Global Minotaur' and 'And the Weak Suffer What They Must?: Europe's Crisis and America's Economic Future.' Benoit Hamon is a French politician and member of the Progressive Alliance of Socialists and Democrats (PES). He served in a number of political positions in France from 2004-2014. He won the primary presidential nomination for the Socialist Party in January 2017.
> see other articles <