Earlier this week the Immigrant Council of Ireland announced the launch of the Bloody Foreigners campaign, a migrant driven blood donation programme conceived to give visibility to the contribution Polish nationals make to the country. We talked to Teresa Buczkowska, one of the organisers, and Integration and Anti-racism Coordinator at the Council, about the context surrounding the initiative, from the Brexit backlash to the ongoing discussion about free movement rights in the EU.

Tell us a bit about the inspiration behind the project. Where did the idea come from?

Blood donation is a big part of Polish culture. I’ve been a donor in Poland since I was 18 and when I moved to Ireland I signed up here too. We have a whole blood donation culture in Poland with sort of social clubs that are gathering people together to go and donate blood in groups, they have Christmas parties together and so on, at least in the region I come from. For a couple of years I’ve thought it could be good to bring this across to Ireland.

Then I met Joanna Zawadzka, a Polish migrant woman living in Edinburgh, and she told me about a campaign that started around the time of Brexit when negative discourse against Eastern European migrants was on the rise. She was tired of hearing these constant insults against herself and Polish people – every day she was told “bloody foreigner go back where you came from!” – so she started this campaign to bring a positive twist on the negative experience. At the time I had just starting working on a project of how freedom of movement is being limited for EU migrants, and I thought it was a perfect fit, so I decided to bring it to Ireland.

Where are things at in terms of organizing? What’s your plan over the coming months?

The budget is very small, so a lot of people are donating their time for free. It’s quite interesting, when I talk to Polish people a lot of them say racism and discrimination is not something they experience personally, but when they hear about the campaign they say “yes we have to do it”.  We’re partnering with one of the biggest Polish organizations in Ireland called Forum Polonia who are providing links with smaller organisations in Ireland.

We’re also working with Kamil Czechlacz, who has a production company in Ireland and he will be looking at the social media and online promotion of the campaign. I will be working with another lady who is organizing the biggest charity event for Ireland’s Polish community, the Christmas Orchestra. Really we want to copy the network that already exists in Ireland and spread the news of the campaign. We have a national day of action planned for late July or sometime in August. We’re hoping Polish people will go to the blood donation centres and take a picture of themselves with the hashtag #bloodyforeigners or perhaps another hashtag #itsinourblood.

Is this only happening in Dublin or also in other cities?

We will be targeting bigger cities where we know there are communities already organized but we are hoping that people will just spontaneously go to clinics across Ireland and donate blood.

What’s the overall goal of the campaign? What would a good result look like?

This is about saving lives, and at the same time about showing that Polish people are a part of this community to the point that they are sharing blood. We’re hoping there will be more of a conversation about the needs of the Polish community. As members of an EU state we are officially not considered as migrants but as ‘mobile citizens’, and in fact lots of integration support is not being targeted at EU migrants. Funding is actually excluding EU migrants.

The thing is Eastern European migrants are in similar needs of integration as non-European migrants because of the division that still exists in peoples’ minds. The Berlin wall collapsed but that division still mentally exists, and as a result Polish and other East European migrants are suffering high levels of discrimination. We are not considered European yet, we are still said to be ‘learning’ how to be European, we are still being lectured about European values. But this isn’t true! We are Europeans, we have been part of the union for 14 years and a part of building European culture. So Bloody Foreigners is about trying to change the narrative.

We are also hoping that the contribution that Polish people give to Ireland will be highlighted more and that’s across the board. Whenever there is a discussion about migration it’s always about negative aspects. When something positive is happening that rarely makes the news so the public doesn’t have the whole picture.

This all sounds really interesting. I only wonder if by emphasizing these ‘useful’ Polish people, you perpetuate that distinction between ‘good’ and ‘bad’ migrants that underpins many xenophobic attitudes. How do you see this dilemma?

This is a very tricky problem and I don’t really know if I have the answer. On the one hand I don’t want to perpetuate this narrative, definitely not in terms of economic contribution because if we start discussing in such terms we are treating people in terms of being labour units and that’s not what people are about. People are human beings with emotions and feelings. Blood donation is not about economic contribution but about being part of society, about people finding their home in Ireland and doing the same thing they were doing back in Poland.

There will always be criticism. No matter how much contribution we show coming from Polish people there will always be attacks from people who will never warm to migration. That’s not our target audience, we don’t even want to engage with people like that. We want to engage instead with people who are not so sure about what is happening, who maybe don’t know what these Polish people are about, whether they are only here temporarily to earn money or whether they are here because this is our home, our country too. We will target people who are open to discussion. 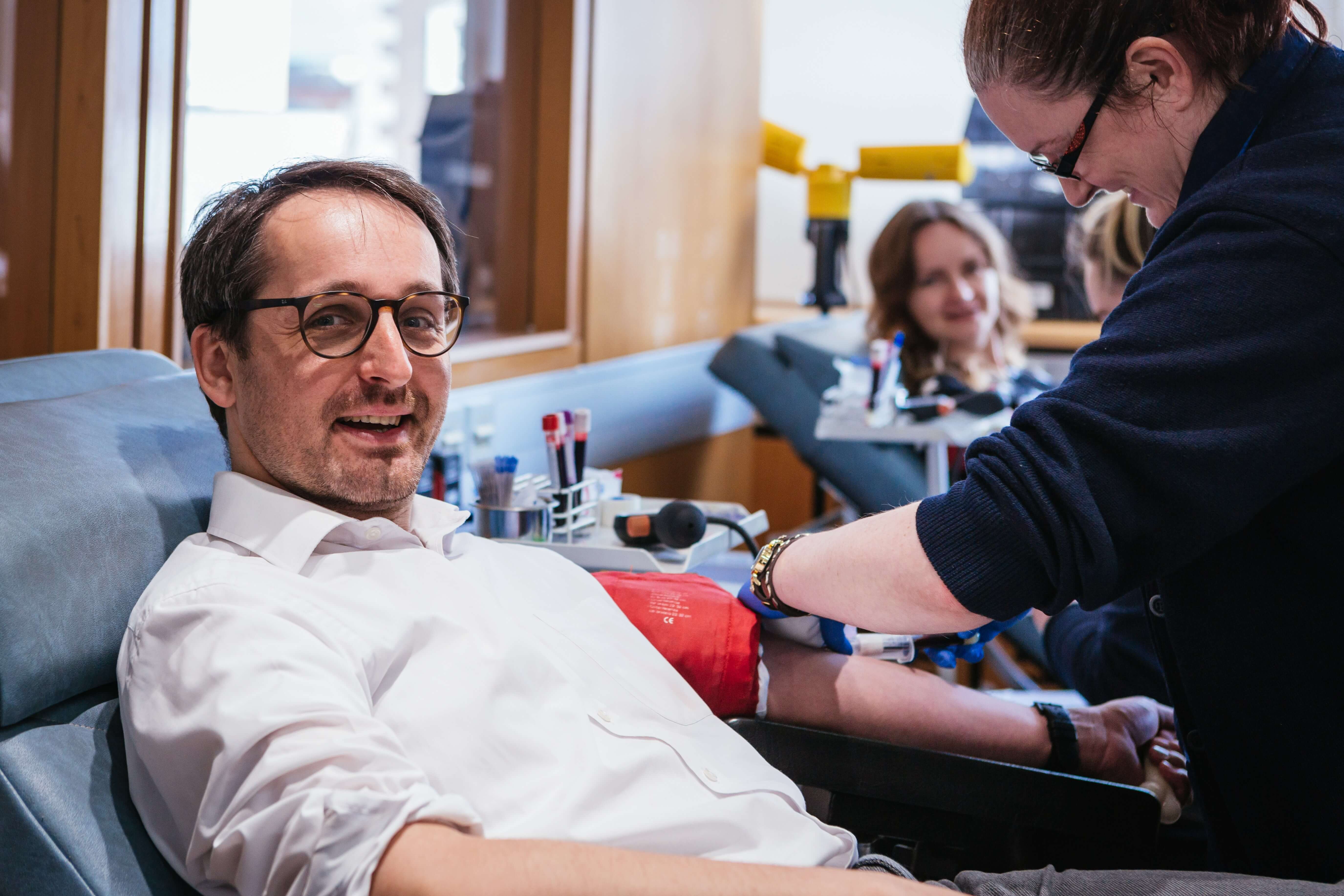 Has Brexit had any noticeable impact on this kind of problem?

As an organisation we don’t have an official position yet because there are so many unknowns. What I can tell you from the perspective of a service provider is what changes we recorded. There is definitely a higher number of British citizens applying for Irish citizenship from grandparents or parents. It’s creating a backlog now. People applying for citizenship before had a waiting time of 6-9 months. Now it’s over a year and is putting a strain on our services as well because a lot of people are coming to us asking for help filling in the forms. There is the issue of the border. Nobody knows what will happen here, we now have people living on one side commuting to the other on a daily basis. How is that going to affect migration? Lots of questions not answers.

There were a few reports in mainstream media recently about increased marriages between non-Europeans and Europeans in Ireland where non-Europeans were giving addresses in the UK. This is related to work we do with sham marriages. Unlike marriages of convenience this term refers to where there is exploitation of one or both parties. This phenomenon is creating a whole negative discussion about migration because people are screaming that Ireland is being used as a backdoor for non EU migrants to the EU. This is another element that we need to consider. Brexit for Ireland as well.

Is tackling the social implications of all this a question for the government and political parties? Or is it better addressed by civil society and NGOs?

Especially when it comes to Ireland the government should be more interested in this because most migrants come from the EU. There are 500,000 migrants in Ireland of which 125,000 are from Poland, so over a fifth. When you include Latvians, Lithuanians, Romanians, more than half are Eastern European. Funding is not there and as a result civil society is only working on the issues they are paid for. It is in the best interest of the government to start talking to the European Union. If they are issuing funding opportunities for migrant integration they should include all migrants in this, not only non-EU. This would allow civil society to get more engaged in those issues.

‘Bloody Foreigners’ is part of the ‘ACT4FreeMovement’ program in support of the free movement of EU citizens. The campaigns aim to increase the capacity of EU citizens to effectively secure access to and knowledge of their rights, as well as build public awareness and political support for mobile citizen rights, including political and civic rights.

More information can be found at: www.euroalter.com/act4freemovement