The Roma must be identified with a census. Migrants must be rejected. The effectiveness of vaccines must be questioned. The good times for illegal immigrants are over. The European Union. NGOs paid by Soros. Mario Balotelli. The Italian anti-mafia journalist Saviano. The smugglers behind humanitarian rescue operations. Social centres. Mateo Salvini’s political communication tactics can be summarized in the daily construction of an enemy that must be attacked. But the real issue is understanding how this communication is able to spread in such a capillary way.

It is an innovation in the relationship between politics and communication. Mateo Salvini, Deputy Prime Minister of Italy and Minister of the Interior since 1 June 2018, seems to have understood more than others, also of Grillo’s supporters who seemed to be at the forefront of the field, the extemporaneous and volatile nature of contemporary political communication, as well as how to relate to it. Salvini’s efforts are all aimed at a constant production of “novelties”, newsworthy information, dictating the agenda to newspapers and online media in particular, with outbursts against the enemy of the day, in an attempt to dominate the political scene with a sort of ubiquity.

Salvini acts in a decidedly linear way. Generally he rants the loudest, the way Trump does in the United States, he waits to see what “effect” this has, and once he has fired up his supporters, once the controversy is unleashed, he stands his ground with a “decisionist” and unrelenting attitude, head-on, further reinforcing his image as a strong man in charge. This is how he prevents a real debate on the issues he raises from taking shape, because yet another rant immediately shifts the attention to another issue, and so on.

The central role communication plays in contemporary politics is taken to another level compared to the past. There is no communication other than that aimed at creating immediate and ‘gut’ support, and the very idea of government is by now inseparable from that of electoral campaign, which has become permanent.

This interpretation also stems from an intelligent analysis of the new relationship between economy and media. The success of social networks has also entailed a decrease in profit of the press. The economic policies of today’s press is also driven by the logic of click-baiting, i.e. the constant need of editors to publish articles capable of attracting repeated views. And so, of attracting investments of advertisers, which have become increasingly pivotal in ensuring the economic sustainability of a newspaper.

This system has allowed Salvini to transform the press into his own megaphone. His phrases are designed, more than before, to be picked up by newspapers.

This system has allowed Salvini to transform the press into his own megaphone. His phrases are designed, more than before, to be picked up by newspapers. Every time Salvini makes a statement he inserts a resounding phrase, which allows the press to attract clicks by simply repeating it in a headline. The effect of this repetition on thousands of pages and in Facebook groups allows Salvini to spread his message on the web with such a pervasiveness that no online campaign could ever achieve, and without any kind of effort on his part.

This has meant a shift also in TV talk shows: from the more or less mandatory rule of giving voice to all sides, these talks have now become politicians’ one-man shows, de facto monologues constructed so as to easily extrapolate one or more “significant” video excerpts to spread across social media.

It is ironic that Salvini himself lashes out against the traditional media system, describing it as being entirely “against him”. It must be stressed that even if this were true – it isn’t, in fact in these last years Salvini has been on TV non stop – it would not be a matter of importance to him, because the army of Facebook users comprising militants of his party creates the impression that it is the “people” in general who are against all statements made by the anti-mafia journalist Saviano, or the “do-gooder” narrative surrounding the migrants’ crossings.

Salvini’s tactic is the same used by Trump, for example, during his winning 2016 electoral campaign. To quote Giovanni De Mauro, who in turn quotes a study by the American linguist Lakoff in “Internazionale” no. 1261, Trump uses different types of tweets. These are “(…) never casual. Some belong to the category of ‘Preemptive Framing’, and their function is to provide an interpretation of facts before anybody else does. There are ‘Diversion’ tweets, which divert attention from sensitive matters. There is ‘Deflection’, which shifts the blame to others. And finally there is ‘Trial Balloon’ used to see how people react to an idea.”

In other words, it is a communication tactic whose only objective is to outstrip the media’s role as fact checker and address the audience directly and that, however, employs these same media outlets which have become mere carriers of information. The fact that Salvini is behind the exponential growth of his party, not the other way round, is, by the way, indicative of how the new media-driven political economy is a decisive factor in the personalization of politics, in the rise of parties constructed around a single personality and in the redefinition of the party system in a “populist” sense.

What we have is a hybrid media system, cross-media, in which analogical and digital compenetrate each other constantly. Analysing Salvini allows to understand how things have changes, how this hybrid system can be taken advantage of with techniques that are not even very refined.

What we have is a hybrid media system, cross-media, in which analogical and digital compenetrate each other constantly. Analysing Salvini allows to understand how things have changes, how this hybrid system can be taken advantage of with techniques that are not even very refined. As noted also by Leonardo Bianchi, Salvini’s career started with Radio Padana, so he is used to thinking about communication. Luca Morisi, his personal Casaleggio – the man behind the success of the Five Star Movement – is a fundamental figure, the social-megaphone of Salvini, the man who has ensured part of his success.

Morisi saw Salvini on television in 2012 and decided to construct a social media character around him, relying on Facebook, considered to be more popular than Twitter. Morisi worked on three levels: creating constant hype around the Salvini character on his Facebook page, having him comment the daily news, often in real time, and spamming highlights of his appearances on TV as Minister of the Interior.

Not everything is “boring politics”. Salvini posts photos of himself watching the talent-show Amici, he comments the results of football matches, he talks about his travels, and asks – himself and his followers – the gushy “good morning” type of questions concerning the meaning of life, to give the impression he is “close to the people”. In fact, according to Morisi, one of the mistakes made by his opponent Renzi consisted in creating too wide a gap between his role as “the Scrapper” and his role as head of state, the latter drifting away from the people and for this reason plummeting in popularity very quickly. 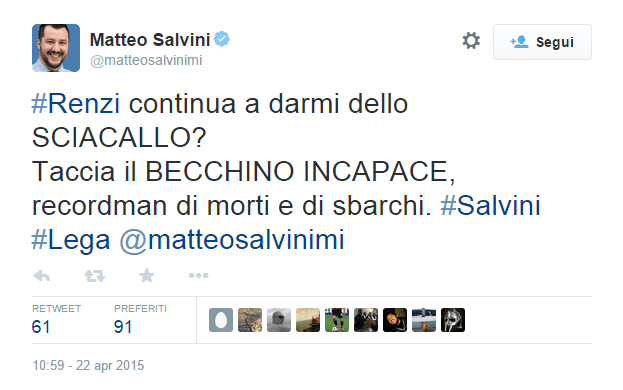 Salvini’s strategy is neither improvised nor casual. The use of the web is the cornerstone of what Morisi calls the TV-web-territory circuit, and it works more or less like this: Salvini makes an appearance on TV, clips that are most likely to “stir” his followers are posted on all the social media networking sites, and then a rally is scheduled, the “Captain” will travel to some location, inviting all to take part. And it works: Mediamonitor.it, for instance, monitored 1,500 sources of information in the decisive period during which negotiations to form the government were held, from May 14 to May 28, and found that quotes in the media by Salvini were 9,140, 32% more than those of the President Mattarella.

It is difficult to imagine a change of course. The reasons are multiple, and they have to do mainly with the media system, which is de facto dependent on Salvini’s provocations for the creation of click-baiting dynamics, never providing the context for his statements and so continuing to act as megaphone of the Minister of the Interior.

It is difficult to imagine that a change of course might take place because of the current relationship  between the economy and the media, indeed editors have no intention of turning down the profits Salvini actually ensures. After all, the same happened with Berlusconi, who became the main sponsor of “Repubblica”, the biggest opposition newspaper in Italy, which seemed to have been transformed into a Pravda. The difference being, however, that social media did not serve as megaphone for the “Cavaliere”, nor was the crisis of the traditional media system as serious as it is today, for which Salvini is actually a true godsend.

Salvini’s communication system is actually banal and not at all complex to analyse and deconstruct; it is, however, effective because the Italian media system is itself roguish and solely intent on making profit. A side note: remember the hideous refrain “if you clash with Salvini you’re only making him more visible”? It would seem that it is exactly the hacks defending stability and social cohesion at all costs who did not understand the role – that of useful idiots – they played.

Demonstrations held in these last years, on the contrary, were very useful to disrupt Salvini’s games with the media, then already in the pipeline, with the only concrete opposition we need in Italy: a social one, one that is visible in the streets. It is the people on the ground, organizing social struggles in the territories, who must resume experiments with types of media assaults, reclaiming tools and skills able to bring about a face to face confrontation, also at this level.

The Campus of European Alternatives arrives to Florence from July 19-22 with trainings on freedom of movement and countering the rise of far right and xenophobia. Discover more about the Campus here

This article is a translation of an article published originally on Infoaut.org. It has been published here with permission.