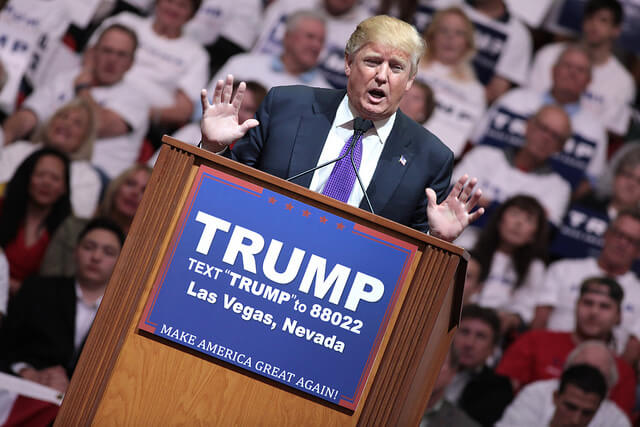 In the beginning, Trump’s campaign was a joke. At some point, it became real. Except it never stopped being a joke.

The possibility of Donald Trump becoming US President is just about as serious as everything else about him. Which is to say—it’s impossible to say. The real novelty of Trump’s campaign lies in this ambivalent transformation of politics into a serious joke. But this is a novelty that’s been long in the making.

In the beginning, we were sure he was just grasping for attention. He stood out from the pack for a moment, but it couldn’t last. Until he one-upped himself to grab attention again, and again, and again. Each time he appeared more ridiculous than before, and his campaign got more serious. Each time he edged closer to becoming the Republic Party presidential nominee, and he stepped farther beyond the limits of what we imagine serious politics to be. His claims to seriousness are a joke. But a horrifyingly funny joke.

The real novelty of Trump’s campaign lies in the ambivalent transformation of politics into a serious joke.

I mean, when was the last time politics was this entertaining? When was the last time we had a candidate capable of surprising us, genuinely surprising us, every time he opened his mouth? When was the last time we could watch such a stream of idiocy—and not ordinary, dull, unreasoned Bushisms, but brilliantly delivered idiocy—emanating from the mouth of someone aspiring to the most powerful office in the world? The absurdity of the contrast—the puerility of the candidate and the gravity of the job—is the stuff of cheap Hollywood comedies. But reality makes absurdity all the funnier, precisely because it is serious.

I admit it. I crave news about Trump as much as anyone. The media know it, and Trump knows it. He’s been living off free publicity from the beginning. He was hardly pressured to fundraise for his primary campaign. It doesn’t matter that it’s bad publicity. No one who says what Trump says could be mistaken for someone afraid of bad publicity. Trump lives off shock and offense. By rejecting the decorum of good publicity, he makes a rich man into a rebel, an elitist insider into an outsider, in an electoral world that’s been turned inside out.

Of course, we all know that politics is about image more than policy, attitude more than action. Hillary Clinton is also an image, a “progressive who gets things done,” who in fact has given little indication that she will really get anything progressive done. Trump, too, is a substance-less image, a representation of rebellion projected onto a defender of old privilege, and a simulacrum of success covering a career of repeated failures.

But Trump is not only an image. He also talks policy. He proposes concrete action. And this is where the joke of his seriousness makes itself most intensely felt.

Trump will raise the minimum wage, except when he won’t.

He will tax the rich, unless he changes his mind.

He is against free trade agreements, except for the new, better agreements he’ll negotiate himself.

He would never have invaded Iraq, but if he had, he would have stolen Iraq’s oil.

Trump calls for a “total” ban on Muslims entering the US. But he doesn’t really mean a total ban, because he would exempt London Mayor Sadiq Khan, and the ban would only apply to people from countries with a “history of terrorism,” and he would only filter out the most dangerous people through an ideological test, and so on, and besides, it was all just a suggestion anyway.

Trump isn’t afraid to take sides on the issues. But why settle for just one side? This doesn’t mean that Trump ever retracts or apologizes for what he’s said. He stands by everything, even when he contradicts himself. We just never know if what he stands by is a serious assertion or rhetorical play.

Trump says Barack Obama “founded” ISIS. “Literally.” But come on, he was only being “sarcastic”; oh, “but not that sarcastic.”

Trump says people with guns might “do” something about Clinton if she becomes president. But of course he didn’t really mean they should shoot her.

Trump tweets an image of Clinton atop a pile of money and a Star of David. But the star was actually just a sheriff’s badge, so what’s the big deal?

Trump’s circuitous hermeneutics are laughable. But that doesn’t make them ineffective, and in some sense they may even be sincere. It’s hard to believe that Trump really considers Obama to be the founder of ISIS, or that he really wants Clinton to be assassinated, or that he really hates all Jews (his daughter Ivanka, for one, is a convert to Judaism; and for the record, he likes Jews because, like him, they’re good at haggling). It’s hard not to take some solace in the probability that Trump doesn’t mean what he says. Maybe, if elected, he would settle for the position of entertainer-in-chief and would never bother to turn shocking rhetoric into hateful policy. (Trump’s campaign reportedly invited the more moderate John Kasich to control his “domestic and foreign policy” if Kasich agreed to serve as Trump’s vice presidential candidate, leaving Trump to focus simply on “making American great again.”) But this very fact—that we don’t take Trump’s statements seriously—enables him to keep making them. He has pushed nearly every boundary of the acceptable, and because he may or may not mean it, we may or may not hold him to account. And if in this fog of hyperbole and irony some real truth is hidden, how would we know it when we find it? Which of his promises might just be real?

Still, even while Trump overturns everything that we think proper in politics, and does so more flamboyantly than anyone before him, it would be wrong to think that he comes out of nowhere. Trump deals in falsehoods like no other, and Fareed Zarakia is no doubt right to call him a bullshit artist, who doesn’t lie so much as blur the lines between the true and the false. This may be a remarkable quality in a politician (politicians are more accustomed to outright, heart-felt lying), but I’m not sure it’s unusual in the world of business, where little is more valued than the unflinching assuredness of men who have nothing but their own self-confidence to sell. And hasn’t the neoliberal consensus been teaching us for years that the state should be run like a business?

Even before neoliberalism, the old bourgeois ideal of the non-partisan statesman had sought to divorce politics from policy and personalities from programs. Trump takes this ideal to its extreme, claiming that he needs no fixed policy positions, because his own prowess as a negotiator guarantees great results. And while elected politicians are supposed to operate as managers and negotiators, campaigning politicians must be salesmen of their managerial brand. Trump, the consummate salesman—sleaze and all—has now done his part to bring the political system more in line with the commodity economy that underpins it.

Yet Trump’s campaign is something new, not least because it comes at a moment when the neoliberal political consensus is bursting from within. Voters are less and less persuaded by the technocratic assurances of mainstream politicians, whose experience and expertise was supposed to bring prosperity. Voters seek firm voices of protest, and if their frustration is not allowed to coalesce around new policy proposals (like those of Sanders), it can coalesce around the greatness of a self-assured braggart (who wields an amorphous array of policy “suggestions”). When the sleek old brands become passé, the market is ready for a huckster, especially an entertaining one. What’s the point of fixing meanings and programs, when the free play of signs is so much more amusing?

Trump may be a fascist, or he may be an actor impersonating a fascist, or he may just be a tasteless jokester. And this may be his genuine contribution to political history: the development of a rightwing radicalism adequate to the postmodern (or post-postmodern?) age, when sincere visions of redemption are a thing of the past, and the bald defense of privilege needs new modes of subterfuge. Today every popular fascist denies his own fascism, but Trumpism obviates the need for denial, because it does not definitively assert anything to begin with. Its most fundamental principle of operation is not hate, but ratings.

Politics and entertainment have been converging for years. Trump takes this convergence to its logical conclusion, as it becomes impossible to tell where politics end and entertainment begins. Are we joyfully watching our own self-destruction? Or are we needlessly afraid of a spectacular fiction? And how would we know the difference?

One way or the other, we have to come to grips with the fact that in this strange blend of horror, comedy, and reality TV, we are all co-stars.

Maybe, as the pundits are saying (yet again), the election really is over, Trump’s campaign has finally run off its rails, and voters are growing tired or scared of the monster they created. Ojalá and inshallah. Even so, Trump’s kind of politics might not go away so easily. Spectators love a train wreck.