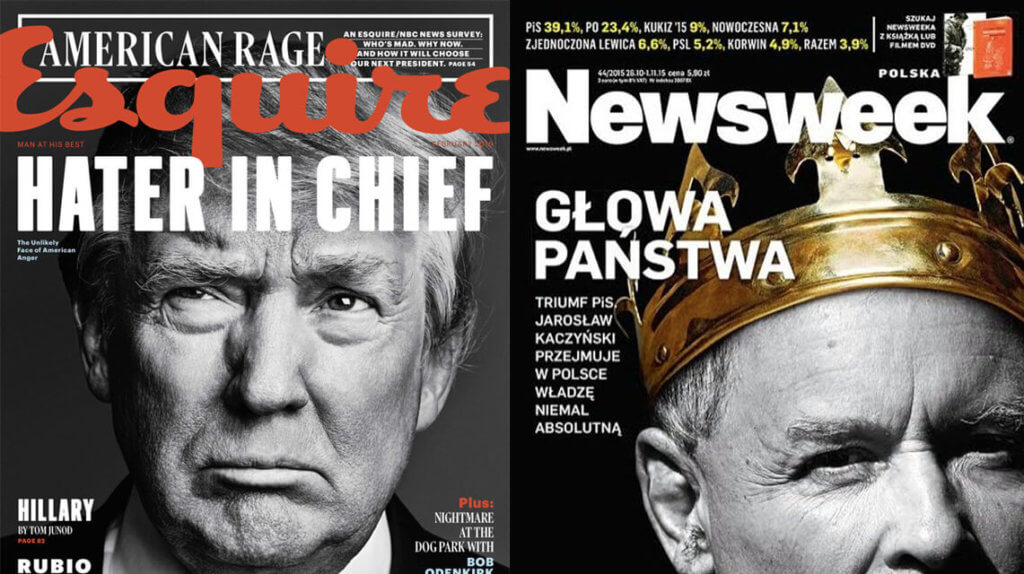 As we know, there are some essential differences between the European Right and its American equivalent. As a Polish-American, I’m endlessly fascinated by those discrepancies. It’s amusing to see the current Polish government, claustrophobic and business-hostile, endorsing Trump and the world of big international business he represents. Sometimes, it seems, the only thing that makes such partnerships possible is a genuine lack of mutual understanding. Well, if the spectrum is so wide, what exactly constitutes the right-wing? Let’s analyse the species in both its continental (Polish) and New World mutations.

What is the ‘Law and Justice’ party and who is this short, unimpressive guy who’s ruling Poland right now? Nope, I’m not talking about the Polish President, Andrzej Duda. I’m not talking about the Polish Prime Minister, Beata Szydło, either. The guy I mean is Jarosław Kaczyński, the twin brother of Lech Kaczyński, the former Polish President, who died in a plane crash in April 2010, along with close to a hundred top governmental officials. This unfortunate event, which the author and the rest of the crooked Left ascribe to the famous Polish recklessness and bad weather, provided the right-wing with a new, truly formative narrative. Russia DID IT, possibly in a cooperation with those Poles who are not really Poles but Germans, like former Polish Prime Minister and now President of the European Council, Donald Tusk. See, the European Union is nothing more than Germany and Poland, since it has stupidly joined the EU in 2004, its pretty much under yet another German occupation. Shall I continue?

Let’s back up a little. Jarosław and Lech Kaczyński were involved, to a certain extent, in the Lech Wałęsa Solidarity movement, as its most conservative flank. After the initial euphoria of the peaceful transition from the nominal communism to the nominal capitalism, the victorious camp started internal power fights. It was a point of honor for the Kaczynski brothers to hunt down communists, ex-communists, and post-communists — an ambitious plan for a country in which three million people belonged to the party, mostly out of convenience, fear and/or greed. After a couple of unsuccessful chances to rule the country, in 2007, Poland had finally had enough of them. It looked like the Right, the xenophobia of traditional Polish values, and the omnipresence of the Catholic Church in politics, health care, and education was finally dying along with the aging, rural, and undereducated parts of the electorate.

Around the same time, the American Right also started to feel like an anachronism. Americans had enough, too: enough of Bush and the Iraq war. Apparently, (some) Republicans even voted for Obama, and the demographic change indicated that within a few years, the GOP would be on the verge of extinction. But, then the economic crisis of 2008 happened, and there’s nothing better than a nice big crisis to resurrect the Right.

It’s they who have pumped new blood into right-wing parties; this is particularly true in Europe.

One might claim that the economic crisis of 2008 was virtually the only tragedy — next to the fourteenth century Black Death — that Poland has ever escaped. But an ideology doesn’t need actual events — it is enough to spread the fear of possible events. To be sure, the Polish economy was still growing, but the consequences of globalism were similar to those in other countries. One of them — and perhaps the decisive one — was a high rate of unemployment among the youth.  It’s they who have pumped new blood into right-wing parties; this is particularly true in Europe. In late 2015, five years after the presidential plane crash, which were spent spreading a conspiracy theory about the tragic accident, ‘Law and Justice’ returned to power. Since then, they’ve managed to curb the powers of the Constitutional Tribunal and significantly limit the freedom of the media — most of which is public, traditionally funded by public money and therefore vulnerable. When Parliament passed the 2017 budget, the ruling party locked the opposition and journalists out of the room. In January 2017, Americans joined the club. But wait a minute…what does all this expansion of the role of government in Poland have to do with American conservatism? Don’t Republicans stand for freedom from government? Don’t they want free media and free business? Who is Trump? Is he obsessed and paranoid like Kaczynski?

Well, if anything, he’s more like President Andrzej Duda on drugs. In this scenario, Kaczyński would be more like an unhappy, paler version of Steve Bannon. He’s the one interested in ideology, Trump is only in it for the money and power. Here’s the deal: Americans have only two parties, but far more than two interest groups. One of the strongest political coalitions is the marriage between the religious Right and the Big Money. Big Money pays for the luxury of maintaining the homophobia, racism, and nationalistic sentiments of the ignorant base. In exchange, it demands freedom to operate as it pleases.  It doesn’t hold any moral views. It remains cold when the “moral” Right is sentimental. The main difference between Poland and the US is the fact that America is run by the rich who use crazy people to maintain power. At present, Poland is run by crazy people DIRECTLY.

The most important battlegrounds are women’s rights, freedom of religion, free media, and education.

Can we predict the Trump administration’s next moves by looking at Poland, which began its turn to the Right a year earlier? Yes, there are/will be a lot of commonalities. The most important battlegrounds are women’s rights, freedom of religion, free media, and education. A couple of months ago, thousands of Polish women went on strike to protect the exceptions to Poland’s ban on abortion. Yep, we are talking about protecting the exceptions — like rape, serious medical need, etc. It’s hard to not see the similarities with the beautiful mobilisation of American women for the Women’s March on DC last month. The media — in both countries — are under attack; ‘The New York Times’ and the CNN are perceived as leftist ideologues by the Trump administration and its supporters. Finally, the Trump administration is drafting the executive order on the freedom of religion — one of its version was leaked a few days ago. The new executive order will reverse the protection religious and sexual minorities enjoyed under Obama. In Poland, where we’ve never experienced the cruelty of political correctness, there’s nothing to reverse. But we understand very well the danger of perceiving ourselves as a Christian nation with Christian values, Christian education, and Christian health care…

The Right is not a set of political beliefs. It’s a set of religious, irrational beliefs. It’s a certain emotional state — a combination of fear and nostalgia. In Poland, it’s about the martyrdom and the suffering throughout the country’s history. I’m not sure if other Christian countries are aware, but Poland perceives itself as the Christ of nations. Poland is so special. Let’s make America great again. America is soooo special. American exceptionalism, Polish messianism. Patriotism — at its worst.