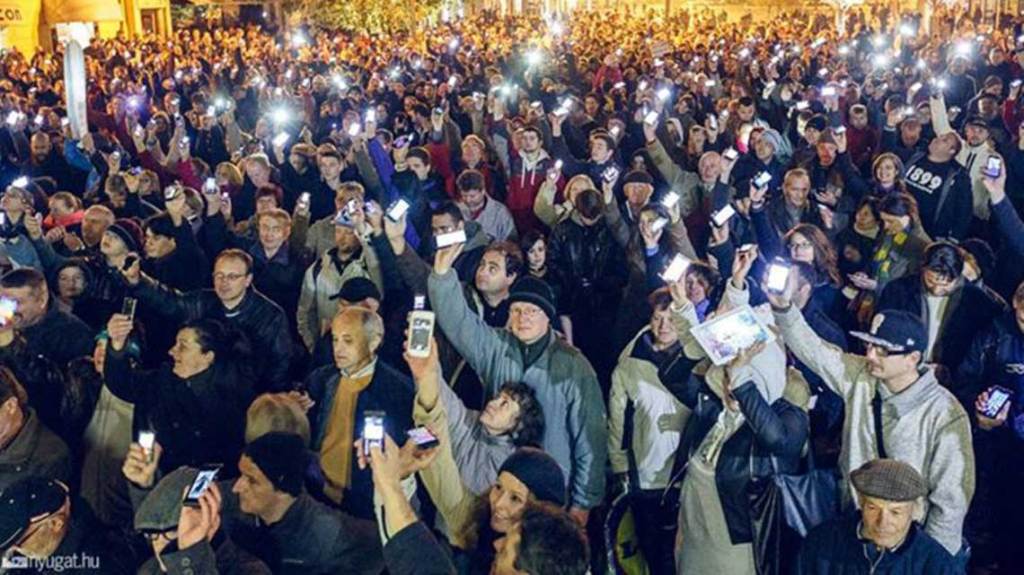 [dropcap]T[/dropcap]he 100K against the Internet Tax Facebook page has organized and two unprecedented demonstrations within 2 days. Sunday 26th and Tuesday the 28th of October, with much more people showing up on Tuesday – according to Reuters 100000 people marched against the Internet tax – making it the largest protest in Hungary’s recent history. Moreover, there have been nationwide protests in more than a dozen major towns across Hungary and by the diaspora abroad. People were upset that institutionalized corruption and failed economic policies drove the government to impose an Internet traffic-volume based tax.

What happened so far? The latests updates

It is not over yet.

#orban always say its not important what he says, what he does is. So we #protest again, cu @ 18:00 #Budapest pic.twitter.com/BR8kNRD2V1

Orbán never said his government will retreat. He said “we have to do this another way”. And then he announced national consultation. He managed to trick international media. And they bought it.

Here’s what national consultation is about. It’s the number one populist tool of the Orbán regime, they use it in cases like this. Here’s how it goes: it’s an extremely expensive direct mail campaign, in which every household gets propaganda materials and a questionnaire. The questions are unbelievable. They are formed in a way, that you can only answer them if you are a fanatic Fidesz follower. And then they announce a great victory, without saying the actual results. Results were never published (3 cases so far), nor methodology.

Good move by the way. Western media bought it, protesters are arguing (celebrate, or go on). And of course national consultation sounds like a democratic thing if you have never seen it – he says.

Protesters will be celebrating victory this evening at Jozsef Nador Sq. at 6pm CET. The event can be found here.

Mr Orban admitted his defeat in Kossuth Radio (National broadcast radio) that his government will retreat. He said that there will be no Internet tax in this form.

Protests are spreading beyond Budapest with rallies held in 5 cities across the country.

The organizers original plan was to place old IT gear (trash) in front of the Fidesz building. The organizers assumed police would take necessary precautions. It did not. A group of couple hundred protesters expressed their frustration by throwing IT trash at the empty building, jumping the fence to swing an EU flag and chant “democracy now”, “Orban piss off” type of slogans. The organizers are deeply concerned about attracting violent elements of society, but have had no resources to manage the security of the Fidesz HQ and were counting on police to do so.

After the demonstration was officially concluded, and Balazs Gyulas, the initiator and organizer, asked the crowd to disperse with the overwhelming majority leaving Hero Sq.

Balazs, who discussed and registered the protest march with police to end at the Fidesz HQ, change the destination of march to Hero sq due to the unexpected mass of people joining the march.

Here is the official EU Commission statement on events related to the Hungary Internet Tax:

First protest was Sunday evening attended by tens of thousands of concerned citizens, from across all political, social and economic strata of society; making this a first in Hungary and indicating universal disagreement of Mr Orban’s Internet tax initiative.

The Facebook page “100000 against the Internet tax” is being followed by more than 220000 Hungarian internet users. Over 40K people rsvped to the demonstration on Sunday.

The Fidesz government announced its plan to introduce a Internet usage based tax by 2015. The policy is unclear and is under constant revision; government officials continue to contradict each other on the exact design of the tax, claiming ISPs will not be allowed to pass on additional burden. BTW: A special tax on soap and artificial flowers will be introduced as well.