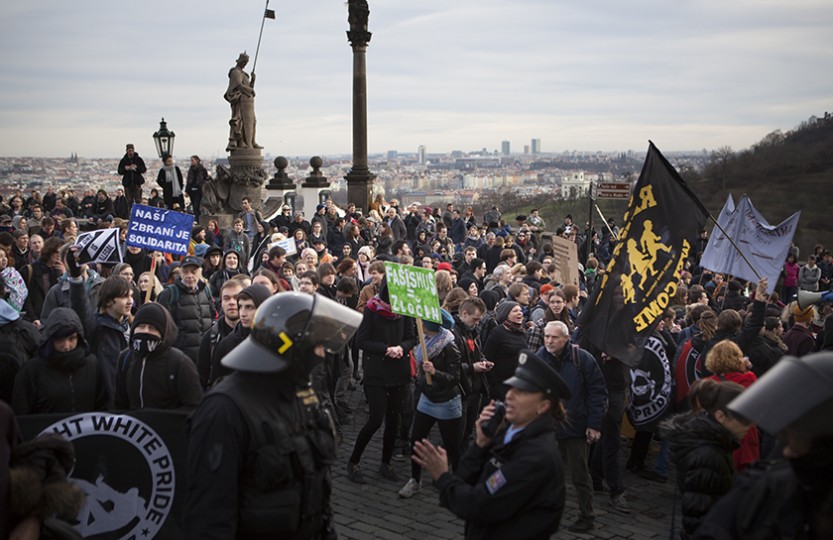 A twenty-one year-old man fired a shot into the air with a gas pistol during the speech of antisemitic extremist Adam B. Bartoš on Loreta Square in Prague. A Czech Radio production trailer was attacked in the Hradčany district during a demonstration of the Block Against Islam. The police standing nearby allegedly only said: “It’s your own fault, because you lie, get your own security service”. Dozens of neo-Nazis attacked a gathering of the initiative No to Racism! in the Malá Strana district, and in the evening they even tried to set fire to the Autonomous Social Centre Klinika. In Hradčany, right in front of the Prague Castle, a Swiss nationalist held forth in German in front of thousands of people, recalling some of Adolf Hitler’s best performances in the 1930s. All this was observed from a distance by the statue of Tomáš Garrigue Masaryk, the first president of independent Czechoslovakia. All of the above was to be seen on Saturday in the centre of the Czech Republic’s capital, in what was the Czech contribution to the pan-European protests organized by the German movement Pegida.

The mobilization of Islamophobes of all persuasions on 6 February, which was simultaneously an international day of demonstrations against refugees, revealed the competition between different groups with political ambitions.

One of the motives for Saturday’s xenophobic events was to see whether the nationalists would manage to repeat their successful march to the Office of the Government on 17 November last year, which had united the supporters of figures such as leader of the Freedom and Direct Democracy movement Tomio Okamura, Block Against Islam leader Martin Konvička, the above-mentioned Adam B. Bartoš, President Miloš Zeman, as well as the most genuine Nazis from the extremist Worker’s Party for Social Justice (DSSS). The mobilization of Islamophobes of all persuasions on 6 February, which was simultaneously an international day of demonstrations against refugees, revealed the competition between different groups with political ambitions. Their hopes were mostly concentrated on the final collective march. Adherents of various camps levelled accusations at one another already during preparations for the day, or accused their opponents of political rivalry.

In promoting his event, leader of the Freedom and Direct Democracy movement Tomio Okamura hinted at the possible presence of Marine Le Pen, but in the end his only international guest was a representative of the Austrian Freedom Party (FPÖ). The crowd of 500 to 1000 supporters of the racist Japanese-Czech politician slowly thinned out and crossed over to the event organized by the Block Against Islam. According to estimates, this attracted up to 3000 participants.

“We are at home here”

The crowd, made up of a mixture of “decent” Czechs (and not just evidently frustrated people) and Nazis, reached to eclectic symbolism – flags of the DSSS, bikers’ crosses, crossed-out mosques, references to the Crusaders and Czech knights, Czech flags. Home-grown racist popular creativity was responsible for slogans such as “I’m a mother/ I’m the nation”, “I’m not a Eurocitizen, I don’t want to eat Eurofood, I’m a patriot”, or “We don’t want thieves and darkies here”. Apart from speeches by representatives of the Block Against Islam and the Dawn of Direct Democracy, the demonstrators were connected via video link with other European cities. Visegrad solidarity emerged clearly – while people reacted with enthusiasm to a relay from a parallel demonstration in Bratislava, the broadcast from Finland was received with some reservation. No reservation, on the other hand, could be detected in relation to the appearance of a Swiss speaker, who thanks to his loud German, threats to politicians, and talk of nations and Europe, authentically reminded the audience of Nazism from old documentary films.

In comparison to 17 November, when no one (including the police) anticipated the final march to the Office of the Government, this time the area known as Klárov near to the government’s offices, had been booked by the Block Against Islam. The police was therefore informed about the event and an anti-fascist response was also ready. Because of the police blockade of practically all access routes into Klárov, and probably also the somewhat lower enthusiasm amonst the fighters against the Isalmization of the Czech Republic, in the end only a small group of nationalists met here. Against their shouts of “We are at home here”, a roughly equally numerous opposing group chanted “Our weapon is solidarity” and “Refugees welcome”.

Rather than their growing support, the various faszicizing initiatives who build their rhetoric on fear of refugees demonstrated their growing aggression. None of the speakers felt the need to distance themselves from the recent stabbing of a Muslim living in the Czech Republic and after the end of the event, a group of neo-Nazis attacked the Autonomous Social Centre Klinika with an as yet unspecified flammable substance. In the afternoon, a group of neo-Nazis attempted to disrupt the demonstration of the initiative No to Racism! and some activists were attacked at the main railway station in the evening.

Almost exactly a year ago, the movement “We don’t want Islam in the Czech Republic” held a demonstration outside the Castle, which was attended by 2000 people at the most. It was a weekday, when participation in demonstrations tends to be lower and those living outside of Prague cannot make it. Saturday’s figures of 3000 participants do not signal a huge increase in support. But Konvička, leader of the Block Against Islam, which arose from the “We don’t want Islam in the Czech Republic” initiative, is no longer talking about halal meat and the rights of women as he used to, but about traitors to their own country who are helping refugees.

At about 1:30pm, participants of a demonstration “For Europe without fear and hatred” gathered between Hradčany and Loreta squares. The event was called together by the associations “Against xenophobia from the Left” and “Against displays of hatred”, who had also jointly organized the protests on 17 November. In their statement, they maintained that they not think that “Europe is inflatable, nor that that it is necessary to accept everyone without security checks. We want Europe to defend its progressive and humanist values and to be based on values on which all of its countries agree. It is only in that way that we can prevent a repetition of the crimes against humanity known to us from the Second World War. These are values that are firmly anchored in the Universal Declaration of Human Rights and the Constitution of the Czech Republic”.

All speakers drew attention to the negative role of the President in the radicalization of Czech society.

Eva Zahradníčková, a Czech volunteer and partner of the first victim of the so-called “migration crisis” in the Czech Republic – a Muslim who had been living in the Czech Republic and organizing help and support for refugees, delivered a speech. In her short appearance, she only emphasized that violence had crept into her life and that the same could happen to anyone. She condemned the statements and attitudes of President Miloš Zeman. In fact, all speakers drew attention to the negative role of the President in the radicalization of society. Above the heads of the crowd flew a banner created by Socialist Solidarity, depicting Zeman watering a swastika from a can, in a reference to Martin Konvička, leader of the Block Against Islam, whose name means “watering can” in Czech.

Apart from Zahradníčková, the demonstration aslo featured a very strong and personal contribution by art historian Milena Bártlová, as well as appearances by the leader of the Green Party, who emphasized the importance of historical personnages associated with the Czech humanist tradition, including Jan Hus, Václav Havel, or Martin Majzner, who is now gathering individual stories of present-day refugees.

The police held the march (mainly due to the omnipresent neo-Nazis) in one place for a long time, but in the end the demonstrators managed to finsih their route at Klárov, where they joined about 400 participants in the other anti-racist protest, organized by the initiatve No to Racism! Their march was attacked in Thunovská Street by a group of several dozen neo-Nazis. The skirmish fortunately did not result in any injuries.

The reason for why two similar events were called for the same time lies first in the different strategies of both groups, and second in the increased possibilities of potentially blocking xenophobic demonstrations and marches in various locations. No clashes – be it with nationalists gathered around the nativist and “Jew-beater” Adam B. Bartoš or the supporters of Martin Konvička – took place. Given that the event organized by the Block Against Islam attracted once again a large number of neo-Nazis, including supporters and members of the DSSS or hard-core ultras football hooligans, this is only a good thing. As was later shown in the evening attack on the Autonomous Social Centre Klinika, hatred let loose, as well as xenophobia and aggression, increasingly legitimized on various levels, has led Czech neo-Nazis into actions that are reminiscent of the worst of what we saw in the 1990s. In terms of numbers, the neo-Nazi presence at hateful demonstrations, including the one organized by the Block Against Islam, was considerable, and tension, the desire for physical confrontation, and violent clashes hung in the air. In this sense, we already know what we are dealing with: the Nazis made themselves heard with last week’s stabbing, and the arson attack and breaking of windows in Klinika, the centre of humanitarian help to refugees in Prague, only confirmed this. And we can count on it getting worse.