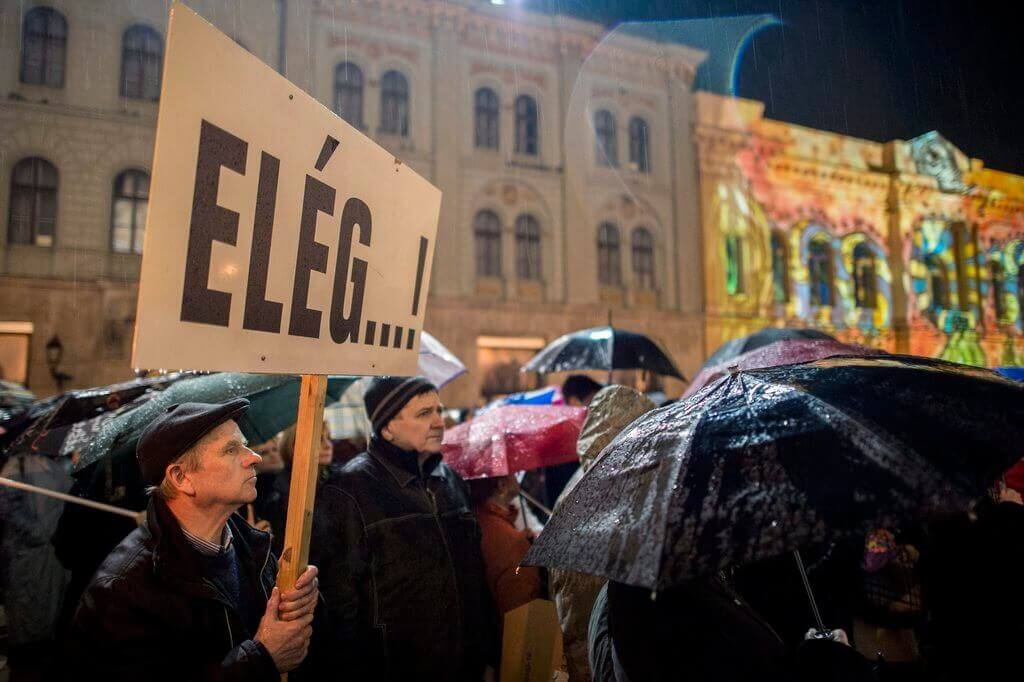 While the Hungarian political space is currently dominated by the resistance of the teachers’ movement against the conservative government of Viktor Orbán, a prominent figure of an older initiative has announced her withdrawal from future political action. Mária Sándor, a neonatology nurse who initiated a protest movement among healthcare workers one year ago, recently declared in an interview that she feels impotent, and that unless she finds strong political backing from her colleagues, she would retire from further political activism. Although the press attributed this declaration to personal fatigue, her declaration speaks to a larger problem belonging to every movement and group that has arisen since 2010 in opposition to the disastrous right-wing government.

The feeling of impotence and fatigue has deeper political roots.

This feeling stems from the fact that the movements do not recognize their goals, do not recognize the path towards these goals, and do not recognize the means they need to employ. It is an impotence that simultaneously means lack of strategy, lack of means, and lack of clearly defined objectives, and which can be seen in tiny, concrete matters. Mária Sándor – but we could list the current teachers’ protests or Milla, the large anti-government movement active in the 2010-13 period – was not capable of building networks, imbuing them with political content and maintaining them. She, together with all the others, was unable to construct a system in order to achieve her goals.

Basically, instead of building oppositional social structures, these groups relied almost completely on traditional media to relay their messages. This strategy is always doomed to fail, since the movement renounces any control over their own message, which the media transmits superficially, often in the wrong tone and at the wrong time. As a result, these initiatives become defenseless and vulnerable. And when they lose the interest and the support of the media, they realize that they lack the channels to transmit their messages and mobilize the people.

These movements did not attempt to substantially engage people with political action, which is the basis of any successful political campaign or movement nowadays.

In the age of the internet there are plenty of ways to circumvent traditional media. But in the last 6 years, none of the large movements have had a proper mobilization strategy. They did not use their social media presence to convey arguments to their supporters, to answer criticism, or to mobilize society. They did not ask their followers to become activists in their own environments. What is more, none of the groups collected phone numbers or e-mail addresses to build a base for potential mobilization. They did not offer their supporters a positive collective identity, and did not help them with the daily questions that arise in political discussions among friends or co-workers. When on rare occasions they manage to provide an incipient collective identity – as was the case with the powerful symbol of checkered shirts during the teachers’ movement – huge emotional energies are unleashed, but the organizers are never quite able to channel these energies and maintain them in the long run.

In short, these movements did not attempt to substantially engage people with political action, which is the basis of any successful political campaign or movement nowadays.

A further shortcoming is that the organizers of these movements are not conscious of the power dynamics in their midst. The organizational structures they establish end up becoming closed—with monopolies of information and power that nobody is willing to share.

These movements are mostly organized on a voluntary basis, their functioning is not regulated by clear procedures, and therefore the participants with the largest amount of free time and energy tend to monopolize access to information and tasks. Under the pressure of deadlines and continuous struggles, this small circle doesn’t put effort into sharing information with others, and so the induction of new members will become stagnant. This is a vicious circle which results in the insiders being unable to cope with the amount of work at hand, leading to a slow disintegration.

Nevertheless, individual organizers and the movements themselves cannot be blamed (exclusively) for this situation. Instead, we have to understand the dynamics that produce this outcome over and over again. Today the experiences, skills, procedural knowledge, and modes of action which are essential to a functioning and sustainable movement cannot be found in the left-leaning segments of Hungarian politics.

There are three reasons for this.

1. The least important among these reasons is the campaign of demonization undertaken by the governing Fidesz party. A couple of years ago the propaganda machine of Fidesz attacked left-wing activists for following the “dangerous” theses of Saul Alinsky. At that time the name was barely known in activist circles, and by now he’s been forgotten again. But the government attacked everybody who accepted foreign material or educational aid during political actions. They were labelled traitors, and quickly delegitimized.

2. Another reason lies in the failure of the media and the public space. Hungarian political discourse speaks about politics as if it was made up of independent episodes and not of a chain of interdependent events. Thus, the media doesn’t substantially analyze the functioning of different movements, and doesn’t try to draw conclusions from their mistakes. It does not mention the fact that political action needs careful planning, strategic thinking, and does not speak about the need to engage people one by one. There is no critical analysis of the way in which politics works, or about the various means through which one can “do politics”.

3. The most crucial of all the reasons is the extinction of leftist and liberal political elites. After 2006, when inevitable electoral defeat was drawing closer, many people left the Hungarian Socialist Party and the liberal Alliance of Free Democrats (which in the meantime completely disintegrated), but these people did not pop up again in new civil society or political initiatives. Instead, they retreated into the private sector or their private lives, and failed to pass on those techniques which are essential to political action.

A similar pattern can be observed among non-party movements as well. The leaders of the largest political movements did not “cultivate” their own successors, did not educate the new generation, or else simply did not involve new people, and in this way they made their own initiatives unsustainable in the long run.

The common denominator of all these movements is that their members retreated into their private spheres, concentrating on their own non-political, or semi-political projects, and do not feel the need to get back to the forefront of political action.

The first generation of the Student Network, which organized the large student protests of 2012-2013, simply retired, while the second generation got tired and gave up the fight for better higher education. The Constitution is Not a Game movement which militated against the authoritarian and conservative amendments of the Hungarian constitution was also exhausted by the lack of proper structures and mechanisms for involving new members. Many of the members of the aforementioned Milla moved to a newly-founded small party, Together, the rest withdrew. Some of the people who organized the giant protests against the internet tax in 2014 are still active, but they did not manage to transform the episodic outburst of popular energies into a long-term movement. The common denominator of all these movements is that their members retreated into their private spheres, concentrating on their own non-political, or semi-political projects, and do not feel the need to get back to the forefront of political action.

And at this point we come back to the present.

The organizers of the protests and movements of the last six years (with a few exceptions) did not feel the responsibility to contact Mária Sándor or the protesting teachers in order to pass on the knowledge and experience they acquired from their own political activism. They did not feel the need to reflect on their mistakes and experiences in the media, and they did not write about what they learnt during those years of struggle. How to organize a protest properly, what were the reasons for their temporary success and ultimate demise? These are all important questions they could have reflected on. In October 2015, my editorial colleagues at Kettős Mérce and I contacted 40 people who participated in the organization of the protests against the internet tax, to ask them to write about their experiences, but only 3 people actually ended up writing some kind of evaluation.

However, if these issues are not discussed in public and are not passed on to the potential organizers of future initiatives, they will make the same mistakes, and fall into the same traps as their predecessors did. It is in this way that the impotence of oppositional politics is continually reproduced. And unfortunately, what is worse, this inability to discuss and learn renders past achievements useless as well.