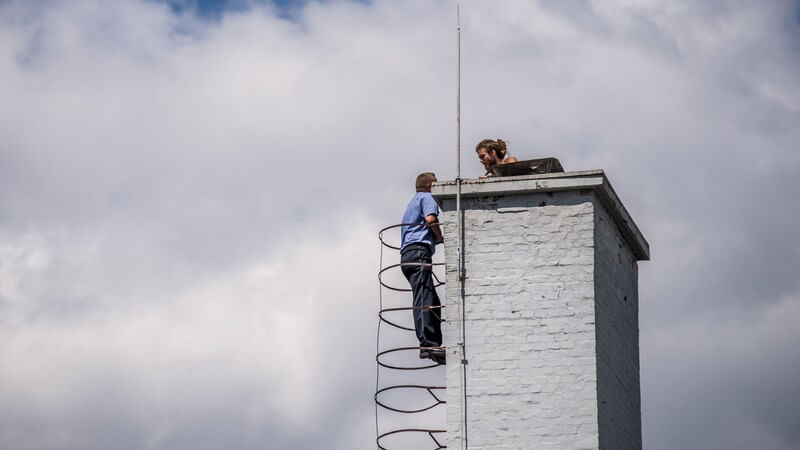 Gergely Komáromy, one of the protesters, on the chimney: he later climbed down of his own accord

Since the Hungarian authorities started to transform Budapest’s oldest and largest public park into an expensive Museum Quarter, devoted activists have been camping on the site to try and prevent its destruction. Tensions are rising and the authorities are not afraid to use underhand tactics and abuse their own power in order to defeat the people who don’t want to see great trees cut down, and the public park turned into a posh area for tourists.

On the morning of 28 June, the “Ligetvédő” (Protecters of Liget) group took down the barricades around the Museum of Transport, which had been placed there by security guards employed by the Városliget Inc. company on Sunday night, so that the demolition of the building could commence. The company wants to start the demolition without a final plan in place on what will occupy the space left by the Museum.

Tensions are rising and the authorities are not afraid to use underhand tactics and abuse their own power in order to defeat the people who don’t want to see great trees cut down, and the public park turned into a posh area for tourists.

Having taken down the improvised fences, the Ligetvédő activists started protesting. Gergely Komáromy, the lead singer of the band Riddim Colony and a member of the Ligetvédő group, climbed onto the building and hung a banner from it. After the police started forcing people off the premises by proclaiming it a construction site, Gergely climbed further up the building and onto the chimney in order to keep protesting, since, in theory, as long as there is a civilian on the territory, the construction cannot proceed. Despite this, the construction continued and after a while, Gergely decided to climb off of the chimney.

A surprising turn of events came after this incident: after a member of the Ligetvédő group made a decision to give up protesting, he was forced into an ambulance and taken to the Gyula Nyírő Hospital’s psychiatric ward, where they kept him under mandatory observation for 24 hours.

But the events did not end there: after most members of the media left the Museum of Transport’s premises, a young man was arrested because the police found a 5 cm long small knife in his bag. A video recording taken of the incident clearly indicates that this was simply an excuse to single him out, as he was one of the protest ringleaders and had a loudspeaker with him. The police arrested others from the Ligetvédő group after they tried to stop a construction vehicle from entering the territory. Several people were injured during this police action.

The protest against the destruction of the Városliget has long outgrown the concept of hippies protecting trees. This is about an investment worth billions that is important to the government because it will enable the National Gallery to move into the new Museum Quarter (which will be built in the Városliget park), thereby freeing up space for Viktor Orbán to move into the Buda Castle.

We are constantly witnessing the government trying to influence public opinion through media bought with state funds, through paid articles and advertisements, and as it’s become abundantly clear since Monday morning, this is being achieved with the assistance of the Hungarian police. The government has used the law in a questionable manner against the Ligetvédő protesters. Or rather, the skinheads, who are employed by Városliget Inc. have.

We must help now

Hungarians, especially the citizens of Budapest need to stand together to fight to protect our right to have a state that does not govern through muscle, nor take protesters to psychiatric wards, but by listening to its citizens, and making sure that the will of the majority is realized.

But the absolute worst moment of the whole incident was when the authorities indirectly declared that the protesters were mentally ill. They had already been calling them “hippies” (even though several self-proclaimed Fidesz voters there who were protesting against the destruction of the park were also present), but by taking Gergely to a mental institution simply because he chose a radical method of protest is a new low. According to eye-witnesses, he was shouting that he did not want them to medicate him while they were forcing him into the ambulance.

He is obviously not mentally ill; he was simply trying to prevent the illegal construction of an investment by a billion-forint real estate business. An investment that is opposed by 75 percent of Budapest’s citizens. He was simply protecting the values of the people and their right to be heard. But on Monday, he was deemed mentally ill.

Now it seems that Városliget Inc. might be suing the Ligetvédő group for trespassing. Hopefully in the following days, there will be lots of people willing to help those who have been protecting our common values and assets as taxpayers, and there will be people who will visit the Ligetvédő group’s camp to help protect the our and our state’s common property. Hungarians, especially the citizens of Budapest need to stand together to fight to protect our right to have a state that does not govern through muscle, nor take protesters to psychiatric wards, but by listening to its citizens, and making sure that the will of the majority is realized.