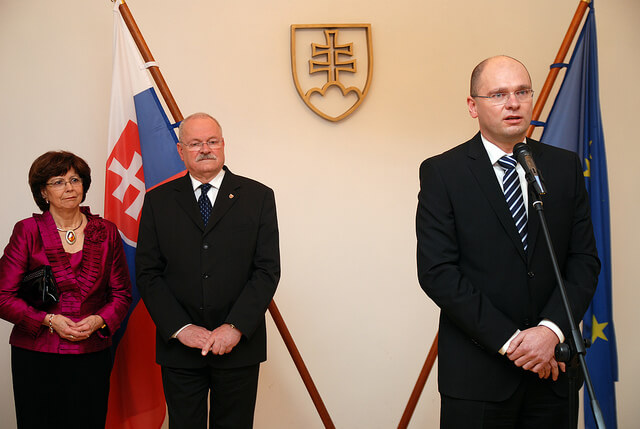 Before the referendum, the British government was signalling it would start negotiations on Britain’s exit from the EU from Day 1 after the results were published. But they quickly began to hesitate, and now they are taking their time and making up excuses on how a speedy exit is not possible. It seems that British politicians were only blackmailing, while having no plan in place if they won the referendum.  The same is true of Eurosceptic Slovak politicians, including Richard Sulík, the leader of the biggest opposition party Freedom and Solidarity (SaS) and a key Eurosceptic voice on the Slovak political scene.

He presents himself as a hero. In reality, for most Western Europeans, he is an exotic face from Slovakia, often ridiculed and his simple truths dismantled.

Whilst campaigning for Remain, David Cameron repeatedly claimed that if the UK voted to leave, he would immediately activate Article 50 triggering the process of exiting the EU. This was only blackmail. He used this claim as a bargaining chip in his attempt to negotiate yet more British exceptions, opt-outs, and advantages with the EU (in addition to already existing ones). As is now clear, this attempt at blackmail failed.

The political narrow-mindedness of Eurosceptics is not only a British problem. Richard Sulík is the chief face of Slovak Euroscepticism and has been poisoning the public sphere with shallow anti-European claims for years. His party scored 12.10% in the March 2016 elections, and scores at 16% in the latest polls.

He presents himself as a hero in German TV discussions, claiming to speak “simple truths“. In reality, for most Western Europeans, he is an exotic face from Slovakia, often ridiculed and his simple truths dismantled- a fact that unfortunately rarely appears on his Facebook page or in the Slovak media.

On June 26th he received a particularly poignant response on German public TV ARD, on a programme with Anne Will, where he was as a guest together with German defense minister Ursula von der Leyen. The topic under discussion was who to blame for Brexit. While the German minister argued that Brits themselves are to blame, Sulík, in impeccable Farage-style, instead blamed the European “elites“, singling out Jean-Claude Juncker. In a key sequence after 21 minutes of the debate, Sulík continued to fervently blame the irresponsible elites in Brussels. Then the German minister asked him with a smile on her face: “And who are you, if I may ask?“ Sulík lost his grip on the discussion, failing to understand what she meant: his education, his work? A laugh comes from the audience and a voice articulated what the moderator repeated immediately: “He is also one of the elites“. Sulík, entirely lost, defended himself, claiming to have only been an MEP for Slovakia for two years, when the German minister continued: “So, what was your constructive addition to the EU as an MEP?“ He proceeded to blush and answer that his contructive addition was “not voting for the Eurocommissioner Junckers“. No one found it necessary to correct him, telling him his real name is Juncker. Sadly, you will not find this part of the video on Sulík’s Facebook page. Instead you find two very finely cut sequences in which Sulík denounces the European elites.

If it wasn’t a serious issue, we could let the Eurosceptics win everywhere as they would subsequently commit political suicide themselves. It would turn out they have no plan and are a destructive, not a constructive element.

Surprisingly enough, a few days later he admitted that the EU has more advantages than disadvantages for Slovakia, namely “Schengen, the Euro and Eurofunds“. Why then is he constantly attacking the EU? Why, in the same way as Cameron, does he not understand that the EU cannot be built as a union from which you only pick the benefits and to which we sometimes pay something back so that there is something to take from again? Does he not realize that his permanent hateful campaign against the EU is only wind in the Slovak neonazis‘ sails? Does he not understand that his party, SaS will do the dirty work and it will be the neonazis who will score the points in a potential Slovak referendum for a Slovak exit from the EU, the same way they have collected political points from the leading social democrats’ Smer-SD anti-refugee rhetoric?

Slovakia can’t afford the luxury of making a mistake

If it wasn’t a serious issue, we could let the Eurosceptics win everywhere as they would subsequently commit political suicide themselves. It would turn out they have no plan and are a destructive, not a constructive element. Unfortunately, Slovakia is not Great Britain which, thanks to its historically democratic roots, will probably “only” fall apart. Sulík, when admiring British courage in “standing up against Brussels“, should not forget we are a former Soviet satellite. And instead of incompetent Tories, our biggest Eurosceptics are Kotleba’s capable-of-everything neonazis.

The fear is that in walking a path towards Putin’s loving embrace, we will end up exchanging the “intellectual dictatorship of Brussels” for heiling fascists. At that moment, when Sulík will finally recommend voting “Remain” as “it is more advantageous”, it will be too late – just as it was for David Cameron.

This text originally appeared in two parts on Aktuality.sk

Zolo Mikeš
Zolo Mikeš is a journalist and a political commentator for Aktuality.sk. Since 2013, he lectures in journalism at Goethe University in Bratislava.
> see other articles <