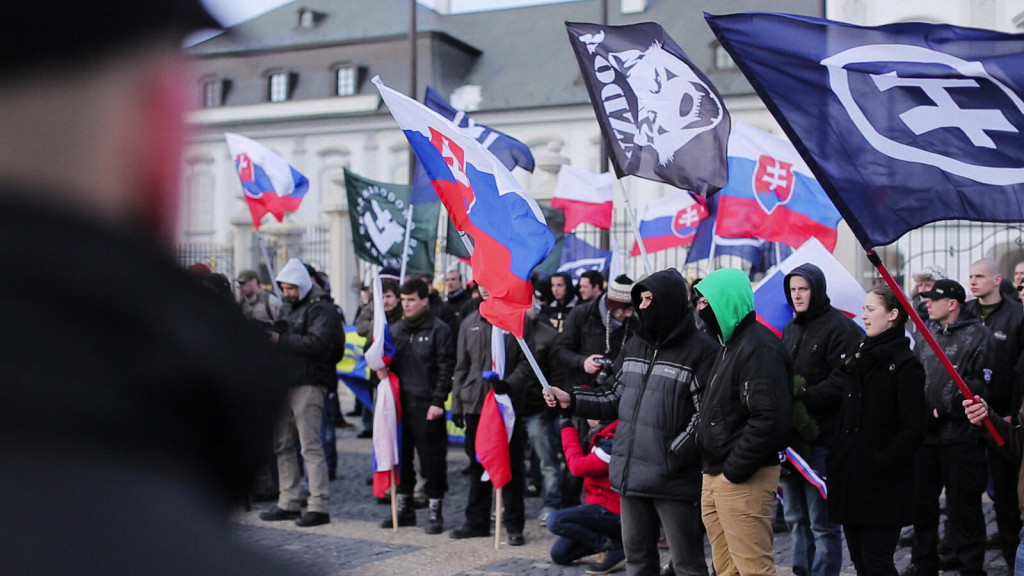 As any progressive leftist, trade unionist, human rights or even environmental activist in Slovakia will tell you, the biggest challenge when working with the public nowadays is not the “old” establishment, traditionally right-wing mainstream media, or even public ignorance, but the new right-wing extremism in the form of self-proclaimed “alternative media“ and their associated groups.

The year 2012 began with great promise. Anti-government demonstrators took to the streets in one of the largest protests ever seen in Slovakia. The demonstration, called Protest Gorila, was called for after the release of a leaked secret service file containing detailed information on corruption among Slovakia’s right-wing politicians, who had been in power for more than 10 years. These were the same politicians who put the country through a string of severe economic reforms, privatizing large parts of the country’s wealth in the interest of a small group of business tycoons. Ironically, these tycoons were often former elite “communists“ who were well-positioned to adapt to the new economic environment after the 1989 Velvet revolution. The protests had an impact on the outcome of the 2012 elections, accelerating the slow death of the SDKÚ-DS (Prime Minister Dzurinda’s right-wing party) and forcing the Parliament to make some long overdue, but nonetheless relatively modest changes (such as removal of the MPs’ criminal immunity). In spite of this, the demonstrations did not bring any significant change. Not a single person mentioned in the Gorila file had criminal charges brought against them.

As a result, the majority of the population, which was genuinely galvanized during the two-week period of mass demonstrations, slipped into defeatism and apathy as the spring came, bringing a one-party government with it. Nonetheless, the Gorila demonstrations radicalized a small part of Slovak society, including former protesters and some of the organizers. Initially, it seemed as though activism in Slovakia had been temporarily reinvigorated. Progressive leftist ideas such as participative democracy and collective ownership, which before had been considered obscure and marginal, were back on the table. The resurgence of leftist ideas was nonetheless short-lived. The need for a counter-narrative was not filled by the progressive Left but by the extreme Right.

Throughout 2013, we witnessed the exponential growth of the so-called “alternative media”, initially published online but increasingly also in print versions. These media often cooperate with “traditional” far-right websites and organizations which have been a political presence since the 1990’s. They turned seemingly harmless conspiracy theories into a platform for hate-speech, extremism, and antisemitism. From the absurd “hollow-Earth theory”, suggesting that an alien race has its headquarters in the middle of the Earth and that the entrance is the very spot where the Slovak, Hungarian, and Austrian borders meet, to the more sinister “world Zionist conspiracy”, or blaming the Roma for Slovakia’s economic situation and demonizing LGBT people. It did not take long for human rights activists and NGOs themselves to be demonized as “American agents”, or worse. By 2014, the so-called alternative media began to enter mainstream public discourse in their own special way.

While still referred to as “controversial”, they were regularly quoted in the mainstream press. This was unheard of no more than a year earlier. The most prominent is the so-called Slobodný vysielač (Free Broadcaster), an internet radio station and website, notoriously extremist in its content, abusing the name of the short-lived radio station of anti-fascist insurgents during the Slovak National Uprising (SNP) in what was arguably the Slovaks’ finest hour, August 1944. It has promoted and largely assisted in the victory of the openly neo-Nazi candidate for regional governor, Marián Kotleba, as an alternative to the current “establishment and state”, thus legitimazing neo-Nazi leaders. Neo-Nazis and fascists are often guests on the radio where they are introduced as experts on “Roma issues”, international affairs, human rights, or even science.

Another example is the a monthly magazine called Zem&Vek (Earth&Age), edited by a notorious conspirator and anti-Semite, Tibor Rostas, which saw phenomenal success with sales rocketing by 500% within the first three months of its release. A good example of what is treated as an “alternative” here is the issue marking the 50th anniversary of the aforementioned Slovak National Uprising, which included many pages of reprints of Nazi propaganda published by the puppet government during the Uprising. Technically, this is legal due to a loophole (one might ask if accidental) concerning the wartime “Slovak state”, but that is not the main problem. The magazine is able to demonize the anti-fascist resistance and relativize the historical events and even the crimes of fascism itself, because it presents itself as a relevant historical “Slovak source” about the Uprising. The biggest “success”, and a real cause for concern, is the extent to which these media present the extremist message in a more sophisticated way, making it harder to spot at first glance. By doing so, these publications reach larger parts of society. Public discourse has deteriorated considerably as a result.  One could argue that it is in large part to their credit that today, the anti-immigrant mood in Slovakia is as high as in Hungary, although no refugee has voluntarily entered the country and part of those few who were brought here as a result of an agreement with the Austrian government have already fled.

When it becomes acceptable to easily find populist, xenophobic, homophobic, anti-Semite or similar rubbish on-line, what is there to stop the mainstream media from including this kind of content in order not to lose their audiences (and sources of income)?

The situation is getting worse. Virtually any significant alternative to the existing mainstream media promotes fascist ideas. It is unexceptional today for leftist, or even environmental activists to appear in the same studio or give an interview to the same magazine as neo-Nazi leaders. In addition, more and more establishment figures such as right-wing MPs are starting to accept the “alternative media” as mainstream media outlets and regard their output as journalism, instead of unsupported, incendiary opinion with no regard for professional standards or ethics. The attitude of the publishers is thinly veiled self-righteousness. They often defend themselves by citing freedom of speech, claiming they are open to everybody and everything, and even accusing all those who refuse to appear in one of their “talk-shows” of censorship. The effect on their recipients is perverting the very idea of freedom of speech by maintaining that our country’s biggest problem is the “censorship“ of fascism and other extremist ideologies in the media and by law.

It is no great surprise that since the Russian occupation and annexation of Crimea, the “alternative media” became de facto propagandists for the Putin regime, trying to present it as an “alternative“ to the establishment’s current orientation to the West, the European Union, NATO and the United States. It was even repeatedly suggested that the funding of these media comes from the East. While this idea has some credibility, no proof has been found as of yet. However, this does not mean the question of funding is unimportant. In a deteriorating economic situation in which more and more people are falling into poverty, in which the middle classes are vanishing and even veteran NGOs with considerable track records report financial difficulties, these “alternative” media outlets claim that their sole source of income is crowdsourcing. The claim may well be true to some extent – they have no income from advertisements since they do not carry commercial messages. Nevertheless, it is difficult to see how it is possible to run an on-line radio and even a television channel with its own premises, state-of-the-art technical equipment and to print a thick magazine on glossy paper, pay a sizeable staff, and still make a profit, according to tax records.

Perhaps, in the best tradition of our parliamentary parties, some generous and anonymous donor left a bag full of money on their doorstep during the night, or a pensioner of no means sent a couple of millions through a tax haven only to have no recollection of the deed when later asked by journalists and the police. But this is no fun for anyone serious about Slovakia. For those who want to build a tolerant, inclusive, and just society or for those who want to simply live, work, and raise a family here, Slovakia’s current trajectory could end in catastrophe. Namely, the mainstream media lowering their already very low journalistic standards even further. When it becomes acceptable to easily find populist, xenophobic, homophobic, anti-Semite or similar rubbish on-line, what is there to stop the mainstream media from including this kind of content in order not to lose their audiences (and sources of income)?

What is the solution? Well, it is already far too late to fight the self-proclaimed alternative media directly. Nor would this be be possible, since neither the progressive Left nor the liberal Right has the means to launch an effective counter-narrative. Even if it were possible to force the closure of one conspiratory extremist “alternative” medium through legal action, which would itself require considerable resources and commitment, others would instantly redistribute its audience among themselves. In my opinion, and after devoting a couple of years of my life to the subject of media literacy, education is the only way forward.

We will never get rid of extremism, we will never get rid of journalists whose ethical standards are too low or monetary needs too high. What we could get rid of is the widespread ignorance about the way the media function and try to influence or manipulate the views and behaviour of their audiences. This kind of education can only be effective when done properly and without loftiness. The added value of educating the recipients is significant, as are the methods used in media literacy to analyse and evaluate the media and its content. Those who master media literacy immunize themselves against any kind of media manipulation, be it right-wing extremists, religious fundamentalists or purely business-minded popular TV stations aggressively promoting endless consumerism, trying to sell us things we don’t need for money we don’t have.