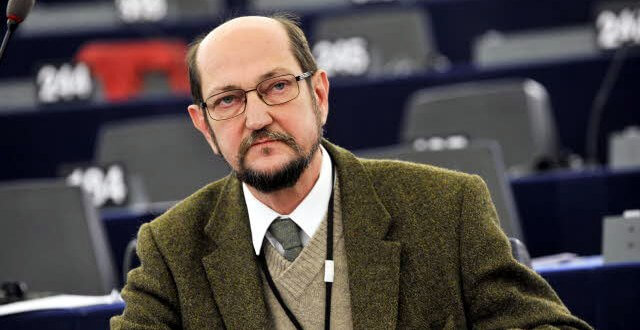 In an interview with the conservative Slovak magazine .týždeň, Member of the European Parliament Boris Zala, along with members of the bureau of the social democratic party Smer, delivered harsh criticism of their own party directed at the highest posts.

Boris Zala, together with MEPs Monika Flašíková-Beňová and Monika Smolková, who are all members of the Smer party, were the only ones who loudly expressed their belief that the Minister of Internal Affairs, Robert Kaliňák had to resign. In the past, Kaliňák has maintained business relations with businessman Ladislav Bašternák, who at present is suspected of major tax fraud and there have been speculations that Kaliňák is interfering with the investigation process from his position as the Minister of Internal Affairs.

This group of Smer MEPs have taken the opposite stance to that of the representatives of Slovak politics: the Parliamentary Group and the coalition’s partners support Kaliňák and sent a message to the MEPs claiming they were detached from reality. The Minister of Internal Affairs was also directly criticized by the French MEP and famous anticorruption fighter, Eva Joly.

For a long time, SMER-SD has acted unanimously, without internal factions and if there has been any internal party criticism, it has usually occurred outside of the media and public space. Having understood that political conflicts tire voters, the party leaders decided not to bring their internal conflicts out of the party headquarters.

The formal cohesiveness and serious image of Smer was disrupted in recent weeks by direct media criticism by members who were at its conception in 1999.

This formal cohesiveness and serious image of the party, which became the government for the third time this year, was disrupted in recent weeks by direct media criticism by members who were at its conception in 1999.

Monika Flašíková-Beňová stated on her blog that Smer had become a closed, elitist club that had moved away from the people. Flašíková-Beňová has assiduously refused the party’s inclination towards conservative nationalism and she believes that the return to social-democratic and liberal values should be represented by new personalities. Boris Zala, the ideological father of Smer, sees it in a similar way.

They have both criticized the election campaign of Smer, believing that it was aimed at provoking fear of refugees among citizens, along with the stigmatization of the Muslim minority. According to Zala, Smer focused excessively on nationalist oriented and traditionalist voters and overestimated Slovakia as a conservative and exclusively Catholic country.  He is concerned about Smer’s indefinite shift towards national conservatism.

In Smer’s case, this shift is a long-running problem. We all remember that Smer was excluded from the European Socialist Party for cooperating with the Slovak National Party (SNS). Between the years 2006 – 2010, Smer often used anti-Hungarian rhetoric. With regards to the growing ambitions for power of the current SNS chairman, Andrej Danko (polls show him as one of the most trusted politicians), there is a competition between Smer and SNS for voters. The Smer and SNS electorate have proven to create so-called ‘communicating vessels’ in the last decade.

Some people blame Smer for the rise of neo-fascism and legitimization of racist rhetoric in Slovakia. Tomáš Profant, the editor of our website POLE, launched a controversial attack on  National Council member and leftist intellectual, Ľuboš Blaha, in the Pravda daily newspaper.

Blaha, who despite advocating the rights of sexual minorities and criticizing global capitalism, thinks that the liberal left in Slovakia has no chance to establish itself as a political party. He believes that Smer’s success lies in its realization that Slovakia is a more conservative country in terms of cultural and ethical issues. He even argues that if the Slovak social democratic party chose the liberal multicultural approach, it would not be in government today.

Boris Zala, in contrast to Blaha, states in his criticism of Smer: “There is a free space for liberals, left liberals, social democrats, greens and other leftists. This entire area is free and furthermore, it is closely linked to the young and pro-European generation. (…) I ask myself whether the current leadership of Smer is able to address these people. And I have to honestly say that answer is no!“ He hopes that Smer will return to the social-democratic line and will be able to reach voters from the liberal centre to the left.

Who Will Take Up the Baton?

Indeed, in Slovakia there is a large, empty gap on the left side of the political spectrum, ranging from the liberal left, to the greens and democratic socialists. The current political setup in Slovakia lacks a large leftist social movement, which leaves leftist activists, journalists and intellectuals fragmented and only occasionally communicating with each other. Can this gap be filled by a new party?

Before the parliamentary elections, there were efforts to create a new movement with the ambition to stand for election. It was led by the civil activist and political analyst Eduard Chmelár. Its name, SEN (acronym for Solidarity – Ecology – Nonviolence) reflected the determination to fight against economic inequality, included a strong environmental dimension and promoted strong anti-militarism and pacifism. However, these efforts were halted by the Interior Ministry’s decision not to register the new party due to their failure to provide a sufficient number of valid citizen signatures.

The Green Party of Slovakia does not declare its support for the leftist criticism of capitalism. It tries to situate itself over the right-left axis in the way it formulates its programme for the protection of the environment. The party does not deal with issues of growth and consumption. Also the way in which it frames socio-economic inequalities and gender issues, is reminiscent of a standard conservative agenda. Its political agenda shows that liberal and cultural issues take the last place in the secondary priorities within their political agenda.

Boris Zala has expressed the desire of many Slovak leftists who have been complaining for years about having no left-wing party that they would be willing to vote for.

In addition to the greens, the radical and anti-capitalist left has remained marginal for a long time. In addition to the Communist Party of Slovakia (KSS), there is another Marxist-Leninist political party: Vzdor – strana práce (Defiance – Labour Party) which mainly represents the younger communist generation (the members of the central committee are 28 years old on average). Vzdor regularly rallies for leaving NATO and it also took part in the blockade of the US Army convoy. In addition, the party expressed solidarity and support to the Kurds and Turkish trade unions. Its members see capitalism and neo-colonialism as the cause and the main culprit of the migrant crisis. The party rejects TTIP (the Transatlantic Trade and Investment Partnership) and economic sanctions against the Russian Federation. On the other hand, Vzdor maintains a positive attitude to the Soviet Union and looks at the era of real socialism with rose-coloured glasses and is pro-Putin oriented.

Lone Wolves of the Slovak Left

Boris Zala has expressed the desire of many Slovak leftists who have been complaining for years about having no left-wing party that they would be willing to vote for. Social democracy can discredit itself if it does not carry out self-reflection. Unfortunately, there is no civil or political basis for the formation of a new left-wing party from which it could grow, if it is not expected to be purely a marketing project.

Therefore, it may be a matter of time before the left in Slovakia will tread a similar path to Poland in becoming a political force but without the ability to affect the direction of the country, while the right-wing parties will alternate in power. Or it may follow the example of Hungary and will powerlessly watch as the conservative government introduces leftist measures approved by a nationalist rhetoric that the left did not opt for when in power.

Nowadays, it is not difficult to criticize Smer from leftist positions if a political party decides to go down this path. But, the radical left does not embark on a direct confrontation of this kind. To be capable of effective action, ‘lone wolves’ of the progressive left should lay down minimum basic objectives and measures for their implementation. That’s why particular segments of the left should be willing to communicate and cooperate.

Despite the things that divide, there are many that unite us. To unite around these issues means preventing fascism from gaining wider support in our society, protecting our social model, fighting against the widening gap of income and wealth inequalities as well as promoting pacifism, environmental values and protecting the rights of all the oppressed.