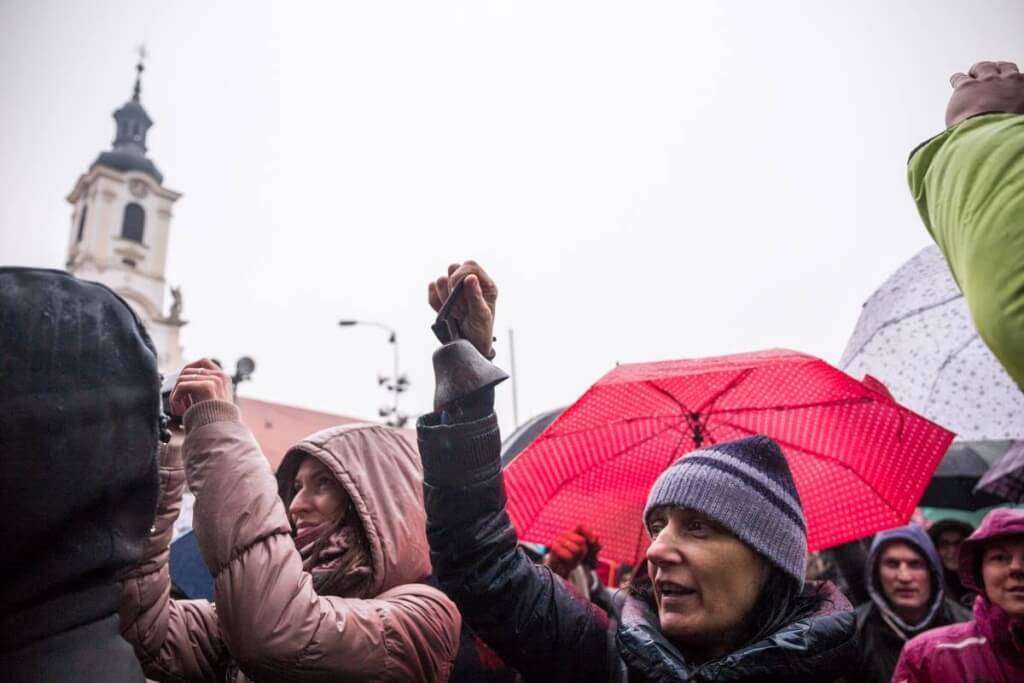 Up  to 11500 teachers and pedagogical staff from 705 schools across Slovakia registered to strike on the 5th of January. This move came on the heel of failed negotiations between the Initiative of Slovak Teachers (IST) and the government, represented by Juraj Draxler, the Minister of Education, Science, Research and Sports. The IST’s key demands, directed to Parliament, were formulated clearly: a gradual 250 Euro increase in tariff salaries for all pedagogical staff in the education sector by January 2017; a 400 mil. Euro budget increase for the sector and a modification of the existing credit system including re-evaluation of the system of life-long education. Despite the uninviting weather on the day of the strike, more than 2000 teachers and supporters gathered at the Slovak National Uprising square in Bratislava, forcing the closure of over a 100 schools. Many issues swayed the podium, principally their dissatisfaction with the underperformance of Slovak students compared to international standards, the lowest salaries for pedagogical staff across the OECD and their disappointment with incessant politicking in schools, wilfulness of schools directors, and bullying in school cabinets.

The current wave of protests is not unprecedented; it echoes the demands for improvements in the education sector articulated already in 2011.

Meanwhile, despite the ongoing protests, elementary schools and high schools have slowly reopened their doors, but the relay has been taken over by Universities. Indeed, staff from more than 15 universities and a number of faculties has declared support to the IST’s cause, calling upon the government to seriously consider their demands as they entered into strike from Monday, 15th February. Public opinion can be split into three camps. There are those who express outright opposition, blaming teachers for being greedy in the best Slovak tradition of racing to the bottom and who believe that teachers should be paid less to be equal to other underpaid Slovak workers. There are those who criticize the timing, condemning the strike as a politicum before the elections. In spite of these oppositions, there is also a large group of people supporting the cause: many events and solidarity actions have taken place in different cities and towns. Specifically, parent groups have taken a strong stand in support of the strike. Their initiatives have included addressing the public with a letter of support, organizing “Fridays with children” so that the schools can continue striking and carrying a green ribbon as a sign of solidarity. The teachers have also been supported by a wide range of public personages standing up in defence of the teachers’ fight, as well as a number of student groups who have organized online and offline to promote the cause.

The current wave of protests is not unprecedented; it echoes the demands for improvements in the education sector articulated already in 2011. In 2012, an open letter addressed to the Minister of Education by two teachers from Dobšiná town scored major media success. The letter had contained elaborate descriptions of their poor teaching conditions in regional schools such as overcrowded classrooms and the absence of modern equipment. They were also critical of their low salaries as well as the fact that their work often involved performing the duties of social workers for children from marginalized communities. In September 2012, a series of strikes had been convened in front of the Office of the Government, organized by New School Unions, and resulting in a relay strike of a number of Bratislava schools. New School Unions are an interesting case in point – one of the new union collectives established out of dissatisfaction with traditional, idle, ineffective and politicized union structures. However, no victories were achieved during these strike actions. Indeed, in the three years since, only mediocre reforms have been introduced under three different ministers.

Almost simultaneously with the teachers, doctors were also on strike in 2012. And it was only after a tense situation in which only the most urgent operations were performed for weeks that the government accepted some of their demands and agreed to ease the stringent budget for doctors’ salaries. This was a minor victory nevertheless, as the strike aimed at the overall sanitation of finances in the health sector; a state of affairs that remains of pressing concern to this day.

Since the strike actions of 2012, the Parliament has responded by amending several Acts, effectively rendering strikes more difficult for the future. For example, doctors on strike can be, under certain circumstances, prosecuted, and every publicly employed person has an obligation to register during the strike for unpaid leave, meaning staying without a salary for the duration of the strike and financing one’s own mandatory health and social security insurance. Considering the high level of consumer prices, the low level of salaries – the average salary in the education sector is around € 760 brutto – and the fact that teachers are already forced to have additional jobs to cover their life expenses, these amendments should be seen as an attack on the right to strike.

It remains to be seen whether the movement will have effects on election results, however if they continue to exert sustained pressure they may succeed in establishing reforms in education as an agenda for the next government.

Prime Minister Róbert Fico seems to be having a hard time dealing with the current teachers’ protests that have been heavily covered by the media. Nnational elections are taking place in less than a month, and as a part of electioneering, all opposition parties have declared their full support to the strike movement. This comes as hypocrisy without scruples: all the major right-wing parties were, when in their respective governments, staunch opponents of the strikes and have historically protested any budget increases for the sector. These conservative voices of solidarity include the SDKU government, who, headed by then-Prime Minister Radičová, openly declared in 2011 that there would be no more money for education, as well as Béla Bugár, the leader of Most-Híd, the Hungarian minority party, who has forgotten his unbridled rage against the railway strikes of 2003 in which his coalition partner KDH, the Christian Democrats, suggested deploying the army to secure railway traffic. Even the SaS, a libertarian laissez-faire party, who religiously promote a business and managerial model for education, are now fervently backing the teachers’ demands for higher public salaries.

The ruling SMER-SD government’s rhetoric is split between supporting the cause, offering teachers a deal for getting housing opportunities (the teachers have, probably for ideological reasons, refused the offer), and issuing tough condemnations of teachers ‘who should do something for Slovakia’. The SMER-SD have also sought to muddle the issues by calling an urgent press conference in which they chose to highlight instead ‘the threat of migration’  – although no migrant is in sight.

An extraordinary meeting of Parliament was convened on the issue on the 11th of February, adopting a pledge for the new government, inter alia, to produce a National Education Programme from 2016-2024. This new program seeks to find ways to enable a transparent and just system of finances for the education sector, to adopt laws on financing regional schools, universities, sciences and research in compliance with OECD recommendations, and to increase the salaries of pedagogical staff. Indeed, what at first seemed to be bad timing for the strike – two months before the elections and after regular parliamentary meetings have concluded – appears to have worked to the strikers’ advantage. Although misused for different political campaigns and electioneering, the strikers have enjoyed quite a strong and positive media coverage and extensive public support. It remains to be seen whether the movement will have effects on election results, however if they continue to exert sustained pressure they may succeed in establishing reforms in education as an agenda for the next government. Ideally, they could utilize lessons learned from previous strike movements and understand their fight as an emancipation cause for working class people across all sectors of the economy. They could also coalesce with the other strike movements. A natural partner comes to mind, the ongoing strike movement of medical assistants. Since November 2015, more than 600 medical assistants have resigned in protest of low salaries and poor financing of the sector in a move to pressurize the government to take action. Unfortunately, they had little backing by hospitals or by public opinion, and were cornered and heavily demonized by the Minister of Health, who threatened to fine them if they recalled their resignations. Thus far, there have been only scarce moments of cooperation, and the way forward would be to merge both movements into one cause. A real game-changer nevertheless, at least from a narrative and discourse point of view, would be for Slovak teachers to make an attempt at transnational solidarity, to understand their cause as a regional one, and to join forces with their Hungarian counterparts fighting the very same fight.