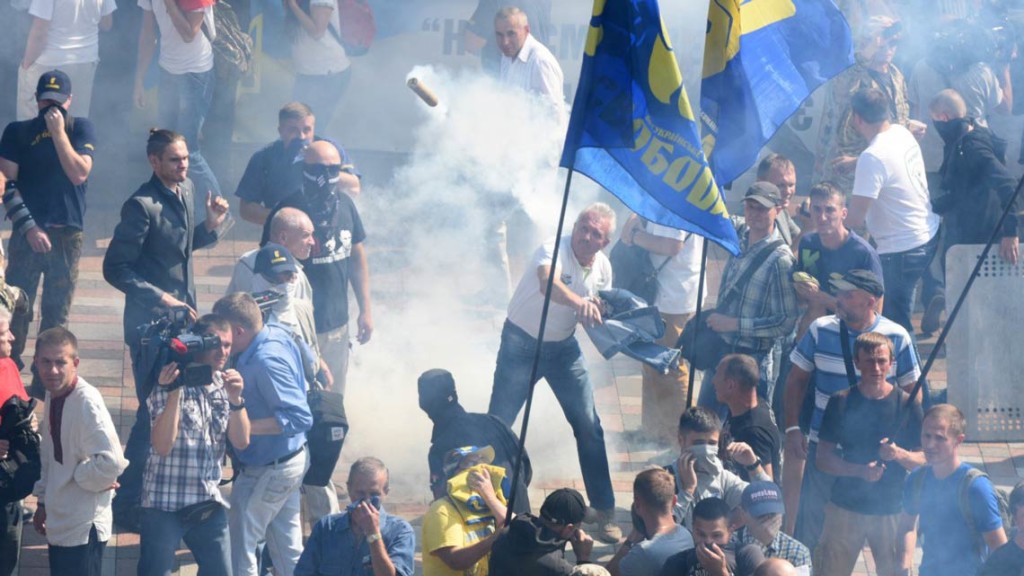 On Monday 31 August, during riots outside the building of the Ukrainian parliament, where a proposal for the decentralization of power and granting “special status” to the Donetsk and Luhansk regions was being discussed, a grenade was hurled at the police and the military officers protecting the site. The explosion left nearly 100 wounded. Reuters also reported one member of the National Guard dead. Vasyl Cherepanyn, member of Political Critique in Ukraine, and the head of the Visual Culture Research Centre, answers questions about who is responsible for the violence in Kiev and the assassins’ intentions.

A discussion was underway in Parliament on the decentralization of power and possible elections to local governments in the Donbas. The matter is indeed important and difficult, though not necessarily clear to the majority of Ukrainian society. The debate and concomitant confusion were thus exploited by the far Right in a way most natural for them: as an opportunity for using violence. The political feud is not the cause of violence; rather it comes as a convenient excuse.

The war in Ukraine creates a political situation that is conducive to the radicalization of rightist groups. The Right, emboldened by the weakness of the state and the generally higher tolerance to nationalism, feel more at home. They do what they always wanted: resort to more solid arguments than cries at demonstrations.

Formations such as Right Sector or Svoboda, which had the strongest representation in yesterday’s riots, seek to achieve one goal: to take the monopoly for violence back from the state.

The antagonism between the authorities and society during the Maidan protests temporarily turned the actions of groups on the Right (and their propensity for taking radical measures) against the regime whose collapse was longed for also by those Ukrainians who do not resort to violence. But today we can no longer delude ourselves that the right to use violence, which the radical groups desire, has anything to do with pro-democratic protests: the Right simply want to take advantage of the war. War is for the Ukrainian Right their natural environment, and acting as in wartime is their modus vivendi. It is during the greatest turmoil that one can do whatever one wants. Throwing grenades only serves to perpetuate that condition.

The situation in which the only political power able to use force in Ukraine is the far Right renders the claims spread by Putin’s propaganda more plausible.

The grenade thrown today has been a gift to Russia.