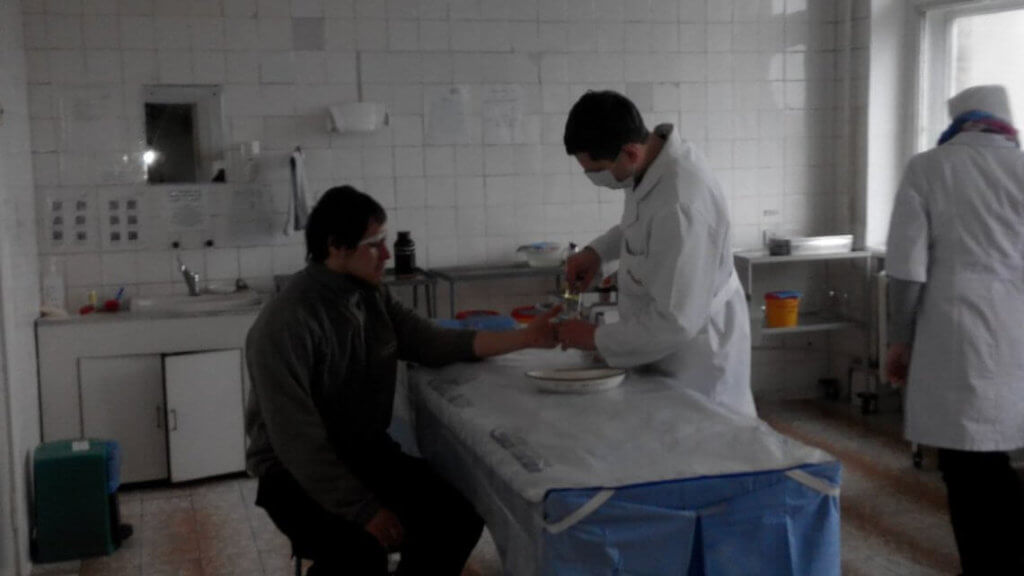 A nother incident of far-right violence took place in Lviv, February 19th, at 3 am. At the main square of the city, an estimated 20-30 people attacked ecological activist Taras Bohay. Bohay recognized members of the far-right groups “Right Sector” and “Azov” among the attackers. Bohay told journalists that while walking home, he saw a group of aggressive and inebriated people harassing foreigners. He came closer and asked what was happening, which was immediately followed by his being violently attacked. He attempted to flee but assailants managed to run him down in a hallway of one of the buildings. “They struck me down and began to kick my head and cut me with something sharp. I heard someone shouting ‘cut him open! ‘kill him!’, and then I lost consciousness .”

After Bohay’s injuries were addressed at the hospital, he was taken to the police station. “They asked me about my political beliefs”

After Bohay’s injuries were addressed at the hospital, he was taken to the police station. “They asked me about my political beliefs. When we came to the police station, one of the attackers was there. He told me that “we [our guys] are already waiting for you in jail, [they] will kill you!” When I asked the officer what he was doing there, I was answered that he was a ‘witness,’” Bohay stated. Later he came to find out that the police had officially defined him as a witness to, and not a victim of, the crime. Bohay was diagnosed with cerebrocranial trauma and multiple lacerations.

In a facebook post on the incident, Lviv Police did not mention the injuries that Taras Bohay sustained and further ignored his testimony.

Meanwhile, Lviv Patrol Police posted on Facebook about the arrest of a 27 year-old man who, “as a result of the conflict, stabbed an 18 year-old teenager.” They did not mention the injuries that Taras Bohay sustained and further ignored his testimony. Ukrainian Political Critique intends to continue following the on-going investigation.

Far-right groups in Ukraine conducted a number of attacks on different activists, institutions, and events throughout the last year. Last March, far-right agitators disrupted the Equality Festival, and at the beginning of October attacked the Social Center Citadel. Two weeks ago David Chichkan’s exhibition, “The Lost Opportunity,” in the Visual Culture Research Center, also was destroyed.