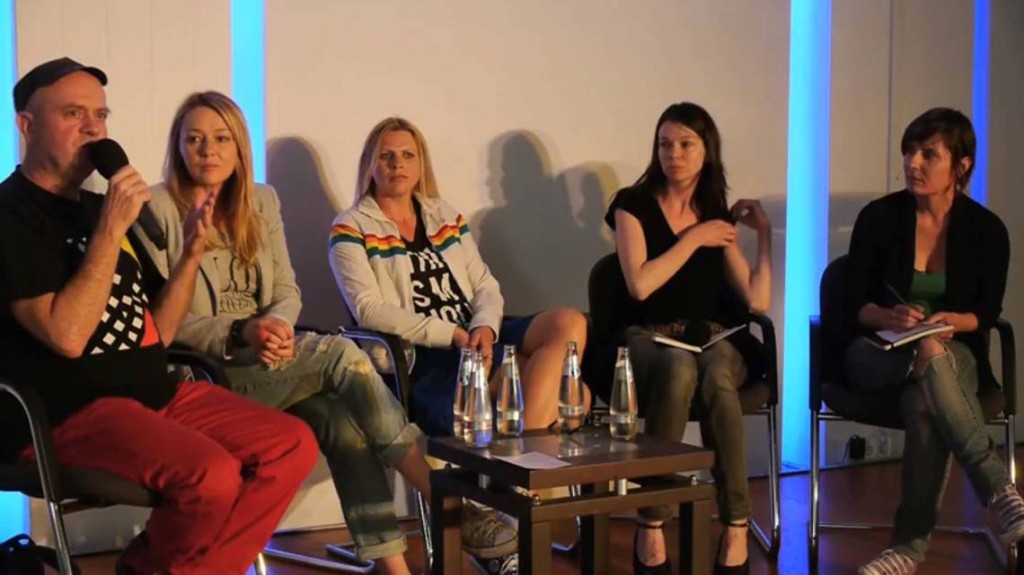 [infobox title=’Debate: “Woman´s Day today and in the past” (Polish/German)’]Polish Spring / Polska Wiosna 2013

Is the issue of women’s rights sufficiently represented in the engaged art? What is the position of women in European politics and European societies? What is the role women have played in the transformation process? These questions will serve as a basis for an open discussion following the presentation of the film “Woman’s Day” (Dzień Kobiet). Video Woman´s Day open discussion with Roman Kurkiewicz, Katarzyna Kwiatkowska and the Director Maria Sadowska. Moderation: Katarzyna Fidos. Organized by the Club of Political Critique (Krytyka Polityczna in Berlin).

Interview with the actress Katarzyna Kwiatkowska and the director Maria Sadowska

The movie is inspired by a true story. Not only in terms of the plot itself, but particularly in terms of the main character Halina, which everyone can identify with. Somebody with desires, weaknesses and dreams. Her humanity is strongly confronted when presented with an opportunity of promotion to a managerial position at the Supermarket ‘Motylek’ (which means ‘butterfly’). The butterfly, which naturally changes according to circumstances, is a great metaphor for Halina’s approach to her relationships with other people. Obsessed with her job, she starts forcing her former colleagues to use diapers while working at the cashiers, as it is ‘the American way’. She changes the rota of her colleagues working hours for the benefit of the supermarket, and finds herself firing her former friends. One could say that the issues shown in the movie are not simply questions of being good or bad. It is the circumstances that impose particular attitudes. She also loses her soul and humanity in different spheres of her life, like with her teenage daughter. While losing so much, Halina personifies the psychological conflict of the working class cashier who becomes a manager. Woman´s Day shows a woman which, for many reasons, every one of us could be.

Political Critique – How did you prepare yourself for the role of the main character, Halina?

Katarzyna Kwiatkowska: It took me two months. During that time, we had a practice in a real supermarket. All of us tried to work as cashiers and find out all the things that you should do when working as one. It was especially hard for me to stay at the cash register. It was crazy, I could not handle it. I tried to be happy and nice to all the costumers and say, “bye bye, have a nice day!” at the end with a big smile on my face. I was very concentrated on my job which was very exhausting. It was impossible, with so many things to do at same time. I also had a supervisor who watched over me so I could not do stupid things of course. It was an interesting experience, to work in this ‘American way’.

Political Critique – Halina is an interesting character. From different points of view, every one of us could be perceived as someone with weaknesses, dreams, and as good or bad. Have you ever felt like a Halina in your personal life?

Katarzyna Kwiatkowska: (smiling) I do not know. I did some stupid things in my life. Although, maybe not to this extent. I do not know if someone lost his job after my actions like it happens with Halina in the movie. But sure, from other perspectives I felt many times like a Halina in my life. Well, it is a too private subject.

Maria Sadowska:  Maybe you identify yourself with Halina while being victorious?

Katarzyna Kwiatkowska: Being victorious? Yes, but all these things are too personal. I do not want to speak about it (smile). I am an actress and my job is to show the emotions, invent personalities.

Political Critique – And where are the boundaries between reality and fiction in acting?

Katarzyna Kwiatkowska – This is our job. It strongly depends on the imagination of an actor. I do not have to go to war to act out this experience. You do not have to fall ill and get cancer to impersonate somebody who has cancer.

Interview with the Director Maria Sadowska –

Political Critique – What contributions do your film has for the discussion on the women rights in Poland?

Maria Sadowska -Well, it is quite hard to say. I did not make this movie as a feminist. Of course there’s a female character and because of it, it can be type casted as a feminist film. But the subject of the movie is not gender struggle. It is about the basic struggle between good and evil. So, the different about this movie are the characters portrayed in the movie. We did not have, for a long time actually, this kind of character in Polish cinema. First of all, it is a woman. Secondly, she is a winner type. This way of talking about woman and putting them in some new social position different from how they are usually represented – as wife, bride or sister – is something new. In the movie the characters are attached to the heroine. I think the most important thing is that in the movie majority of the characters are women, about 90 percent. We are also telling histories of women of different kinds and ages and we can also see their different points of view.

Politcal Critique – Are women sufficiently represented in Polish Engaged Art? Or does your film contribute to the creation of a new context for discussion?

Maria Sadowska – I think it gives a new context. We did not have a film with such discussion before, with a strong woman character and the world of the working class. These two elements make this film different. Most of the woman characters seen in commercial movies are presented from a very male, chauvinistic perspective.

Political Critique – How was the reception of the film in Poland?

Maria Sadowska – We had some great reviews. But the problem in Poland is, while there is a discussion about feminism and women, I would say that these issues are shown in a very negative way to the rest of the society.

Maria Sadowska – I did not exactly know about it and I never thought about it properly, but while doing this movie, people started asking me about it (feminism). What is very sad is that many women are opposed to feminism. Some female public figures say on television “I am not a feminist, I know how to cook a cake”, and it seems so strange to me. I would say that the album from the film is more feminist than the movie itself, because of captions. The lyrics are based on writing of Simone de Beauvoir and Susan Sontag for example, and touch upon the problems of women. There was no album like this before. There were some artists that were singing about woman, of course. Great Polish singers. But nobody has ever done a conceptual album. I would say that the movie is not feminist, it is more universal. I wanted to write a film about a universal story about someone who lost his soul and got it back and found his rebel inside him.

Political Critique – Considering social context and conflicts, could the main character Halina be a man too? How was it to work within class and gender boundaries during the production of the film?

Maria Sadowska-I did not think about it while making the film. It started emerging along with the story. The only crucial decision, actually, was to situate the story within this world by choosing particular people to create the characters. I just focused on, let’s say, the artistic side of it, making the story universal and well-told. The only decision was to put in this particular World, the world of a working class. You are not completely free to read it by yourself anymore, because the World itself determines the way of doing it.

Political Critique – Have you ever felt like a Halina in your life?

Maria Sadowska -I think we all frequently feel like a Halina. This is the reason why people like this movie, I think. But yes, many times I had to fight. All my life, actually. For being able to be an artist, for pursuing all my passions, like music and cinema, even when people did not believe that I can manage both simultaneously. But I do not know if I would be brave enough to do what she did, even considering myself a fighter. I do not know if I could fight as much as she fights in my movie and that is why she is the kind of character that I really admire. Actually, I have never had a knife so close to my throat.