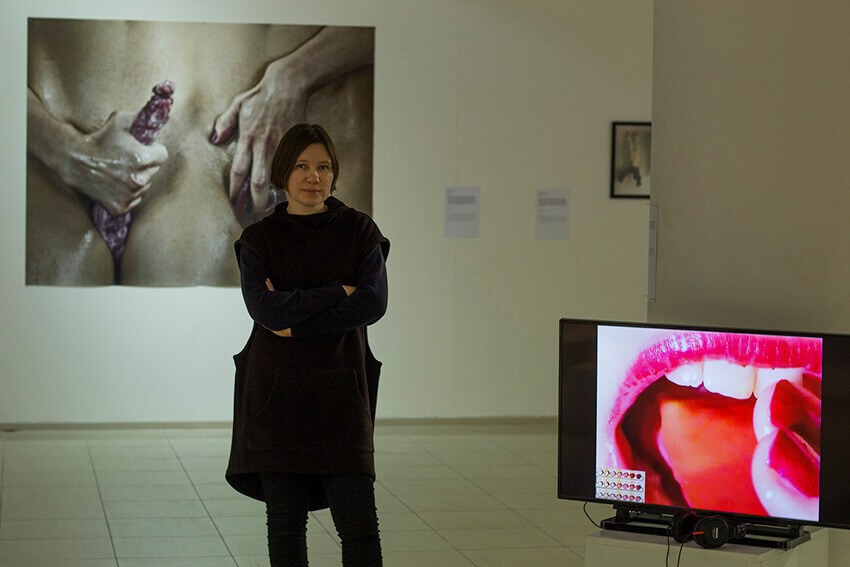 Envisioning what it means to be a woman in society and what constitutes her as a woman has gone through drastic changes over the last century. Through emancipation, women have become independent in managing their own lives. The standards of masculinity have been changed as well. Today it is no surprise that a woman works as hard as a man. But despite this, the “traditional” requirements to women such as to be beautiful, to inspire men, and to be a mother and raise children persist. Enjoying equal rights with men de jure, a woman continues to fight for them in many difficult situations de facto that often require strength of a personal choice. “Female” occupations are less prestigious and lower paid, while the government and business are mostly dominated by men. Since childhood, a woman is surrounded by the models of femininity that follow her all of her life, so that she does not depart from them. Women are being told about themselves.

Through the works of the artists, we hear the voices of women about themselves and society. When a woman starts speaking herself, the model becomes silent. When history is beeing reconsidered as female one, it opens its unknown sides, where one cannot avoid the issues of discrimination, as well as achievements of women who are not inscribed in the mainstream. The “female” and “male” can reveal themselves in unexpected places and in various combinations. Despite the usual rigidity of these concepts, a watchful eye sees how they are eroded all the time.

For centuries, the female body was a fascinating facade and reproductive machine, while the female personality was classified according to a type of dependance: a mother, a wife, a mistress, a prostitute. Today we live in a world that makes possible a completely different vision, putting ahead a political demand for equality of sexes regardless of real or imaginary differences between them. However, for implementing the declared equality, one needs to explore how the “female” is constructed. It includes stigmata of history, female sexuality, and courage to give life. Also it has an incredibly important voice in the cultural and social life that changes the symbolic order. This voice is especially important during military conflicts that exacerbate domination of the “male”.

Equality is impossible until every man asks himself without fear: “What in me is feminine?”. For a woman, this question means a distance for understanding her identity and gender role. The exhibition offers a range of such conceptualizations. Women’s corporality, women’s history, women’s practices and rituals of everyday life, criticism of society and gender roles are explored by works of the Ukrainian and Polish women artists.

Exhibition “What in me is Feminine?”