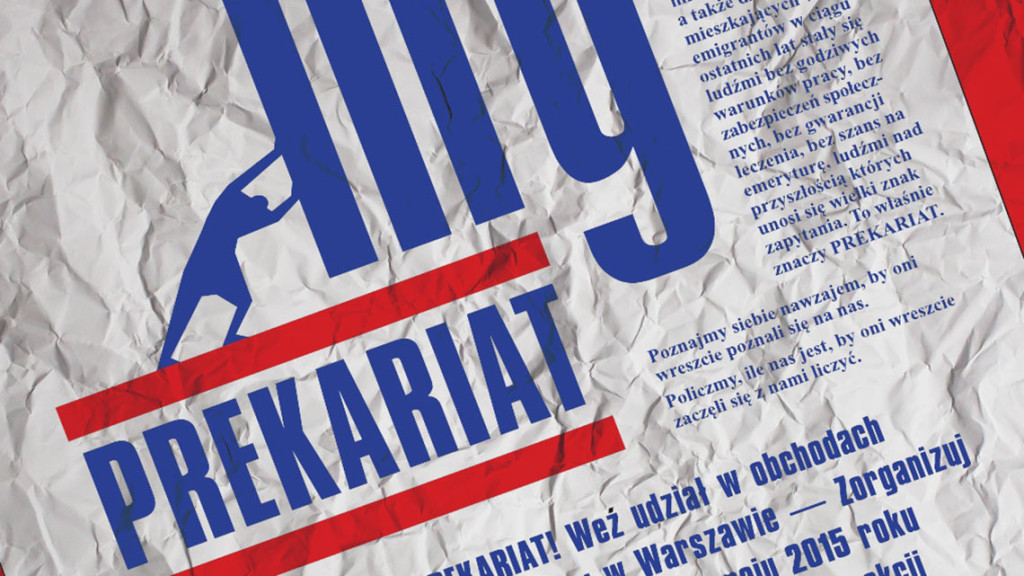 MY, PREKARIAT (WE, the PRECARIAT)
social campaign

In Poland, as all around the world, the process of systematically dismantling guarantees for stability of employment and reduction of workers’ rights by deregulating labour market and promoting so-called flexible forms of employment’ permanently develops.

Deregulation of labour market consists of law changes aiming to abolish or limit warranties related to minimum wage, observance of maximum working time, protection of stability of employment, freedom of associating in the trade unions and the right to benefit from social security system (unemployment benefits, pensions, social assistance benefits). Deregulation is a consequence of policies pursued by the state authorities following European Union’s indications – in recent years in Poland labour law reforms were implemented that effort, inter alia, to prolong work’s settlement periods, to introduce exceptions to minimum wage guarantees and to introduce new forms of employment such as temporary work, teleworking, etc.

Flexible forms of employment are those where the employee is deprived of any social guarantees related to the fact of employment. The symbol of flexible work are junk contracts. Their increasing use is increasingly exercised by entrepreneurs (both public and private) seeking to cheapen labour costs and maximize their profits at the expense of workers.

Deregulation of labour market and spread of flexible labour forms lead to the augmentation of the precariat in Poland, to the growth of number of workers employed periodically, casually, oscillating between work and unemployment, pushed outside the margins of the labour law and regulations related to trade unionism, employees and workers not benefiting from social securities, lacking chances for the future retirement, with limited access to medical treatment. The precarious condition affects Polish men and women of all ages, from large cities and from provinces as well as migrants. The precariat covers all sectors of economy – from services to education, from construction works to culture, from health to international corporations. Precarious condition becomes the dominant way of life characterized by uncertainty, instability and unpredictability. So far precariat in Poland was dispersed and disorganized. It’s time to change it, it’s time to integrate precarious workers and launch common process of struggling for our inalienable right to decent work for a fair wage.

MY, PREKARIAT (WE, the PRECARIAT) social campaign that would lead towards celebrations of PRECARIAT’s DAY is aimed to:

1. Act in favour for integration of precarious workers by:

2. Act in favour for popularizing in the Polish public sphere the term „precariat”, introducing knowledge on features of precarious condition of Polish workers, knowledge about the origins of precarity and the negative social consequences of deregulation of the labour market and the implementation of „flexible forms of employment”, as well as in favour for popularizing proposals circulating among world-wide precarious workers’ movements and thinkers related to fight and overpower the mentioned consequences (including Guaranteed minimum income etc.).

3. Organize in Poland a nationwide assembly of precarious workers in the framework of celebrations of PRECARIAT’s DAY on May 23, 2015 in Warsaw, accompanied by DAYS OF PRECARIUS ACTION in the weeks preceding it.

MY, PREKARIAT (WE, the PRECARIAT) campaign consists of, inter alia, activities within the framework of DAYS OF  PRECARIOUS ACTION in May 2015 all over Poland, the celebrations of the PRECARIAT’s DAY on May 23, 2015 in Warsaw, the on-line action JA PREKARIUSZ / JA, PREKARIUSZKA (ME, the PRECARIOUS WORKER) that aims to compose the collection of statements of precarious workers about their living and working conditions, and their demands regarding struggling against consequences of precarity. Within the framework of the campaign we invite everybody to design posters, slogans, to record songs, make memes, video-clips, and to report demands regarding overpowering precarious condition.

The main organiser of MY, PREKARIAT (WE, the PRECARIAT) campaign is Workers Initiativeautonomous trade union.