A couple of months before the 2018 general elections in Hungary, Fidesz’s control over Hungarian media is overwhelming. There are no independent newspapers outside of the capital, as all are owned by one of the three companies close to power.

One of them is owned by Andy Vajna, the “Government Commissioner in charge of the Hungarian film industry,” who also owns one of Hungary’s two commercial TV channels, and numerous radio stations.

The other one is owned by Lőrinc Mészáros, mayor of Orbán’s hometown Felcsút. As of now, Mészáros owns around 200 newspapers, as well and energy and construction companies which regularly win state tenders, making him one of the richest men in the country.

The third company belongs to Austrian businessman Heinrich Pecina, who, after closing overnight Hungary’s most widely read oppositional daily Népszabadság, sold its publishing company to Mészáros. Pecina’s company also owns Hungarian papers in Romania, where the registration campaign of dual citizens for the 2018 elections is already in full swing.

It is in these circumstances that Kettős Mérce, an activist blog and partner of Political Critique, are providing openly oppositional, progressive coverage on issues of social justice, inequality, solidarity, and social rights both in Hungarian and international politics.

Now, Kettős Mérce will turn into a news portal providing daily news, commentary, and reporting with special emphasis on health care, education, poverty, worker’s rights, and gender inequality. To be able to launch their new site in October, they started a crowdfunding campaign – and if they succeed, they will be the first completely independent, reader-supported medium in Hungary. 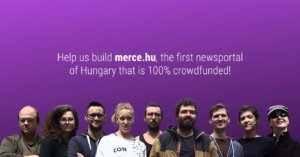