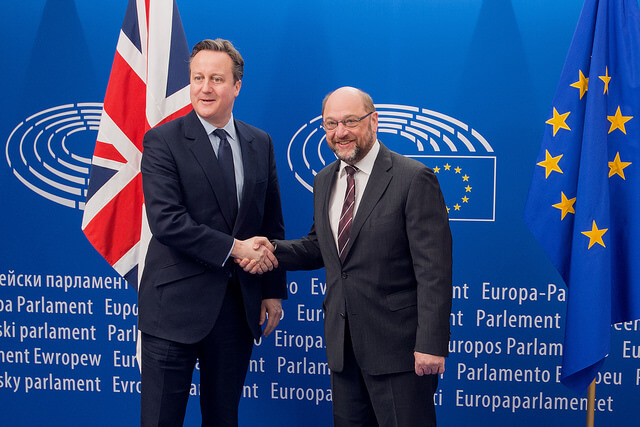 Last summer, at the height of the Eurozone crisis, when it seemed that Greece would be forced to leave the common currency and, perhaps, even the European Union, if it wanted to get rid of Brussels’ faulty crisis management that was condemning Greek society to interminable austerity, we were bombarded with a single tune: we cannot let the Greek government get what it wants because it would kick off a chain reaction, and other states might also try to reject the gospel of austerity. Not even a year has passed since Grexit seemed possible, and another exit – that of Great Britain – casts a shadow over the EU. But this time nobody is going against the will of the British government, nobody fears the possible chain reaction, nobody is scared by the erosion of the labour rights of European (specifically Eastern European) citizens. One question – admittedly, a naïve one – is in order: what explains this difference in the treatment of the two exits?

The British exit is not about decreasing the economic burden of austerity suffered by European citizens. Quite the contrary, it is about creating the possibility for member states to discriminate between first-class and second-class citizens, to refuse social benefits to the latter, and to push more ‘budgetary balance’ and cuts in public services down the throats of the former. Apparently, this does not bother the European elites.

It is not too difficult to see the chain reaction.

After the UK pushed the possibility to curtail social benefits for workers coming from other member states through the EU, it cleared the way for others to do the same. A few days after the summit allowing this possibility, Werner Faymann, the Social-Democratic chancellor of Austria, announced that his cabinet would also cut child benefits for foreign workers. His minister of foreign affairs declared that “Austria needs a workforce, not people who are simply looking for the most advantageous welfare regime”. Translation: work hard, make the country richer, but do not expect anything in return. German chancellor Angela Merkel made similar remarks.

The British exit is not about decreasing the economic burden of austerity suffered by European citizens. Quite the contrary.

It doesn’t end there: according to a fresh poll, the majority of Dutch citizens would also like a referendum similar to the British one, and it is only a matter of time until politicians seize on this issue. Let’s not kid ourselves: they will also attack foreign workers. Last December, a Danish referendum already rejected further integration, and the Danish government figured among the most vocal supporters of British demands in the last couple of months. These are all established facts, and let’s not imagine what would happen if the anti-immigration Right gets even stronger in larger countries, such as France. (It’s not as if French socialists would behave much better.)

If it hasn’t been clear up to this point, I’ll spell it out: nobody cares about workers, or their rights and conditions.

Last summer, the Greek government begged Brussels and Berlin to put an end to the politics that focused exclusively on macro-economic figures, worshipping balanced budgets and portraying austerity as the Holy Grail. The Syriza government argued that this policy has been deemed faulty by a long line of economists, and furthermore forces on the shoulders of ordinary people the burden of a crisis that was not caused by them, but by irresponsible banks and economic decision-makers.

EU elites, however, were even willing to go against a referendum in order to push their agenda – they did so not out of sheer bigotry, but due to well-defined interests. When we saw the figures showing just how much of the loans given to Greece were finding their way back to the banking systems of the wealthy states, while the austerity these loans required was suffered by ordinary people, the fundamental mechanism coded into the present structure of the EU became painfully visible. The European periphery, comprising of Southern- and Eastern-European countries, constitutes an important resource for international capital: it is provider of cheap and flexible labour; it is a terrain for Western companies to harvest cheaper profits, carrying home sums significantly higher than the sums arriving in these regions in the form of EU subsidies. If needed, countries of the European center can even import workers from these regions – workers that are not only cheaper, but, due to competition, also push down the wages of native workers. And now, thanks to David Cameron, these imported workers can also be denied fundamental social benefits.

[easy-tweet tweet=”I’ll spell it out: nobody cares about workers, or their rights and conditions.” user=”krytyka” usehashtags=”no”]

At this point it becomes clear why no one is freaking out over the chain reaction the British government is generating.

While in the forefront European politicians are generating anti-immigrant fears, and ‘bravely’ protecting their people from foreign workers, behind the curtains native workers are being stripped of everything too. David Cameron’s Conservative government is a perfect illustration: in the last couple of years it undertook an unprecedented destruction of the British welfare state, taking away the possibility of a decent living from millions. It privatized everything in sight, cut taxes for the rich and legislated mandatory budgetary surpluses, guaranteeing that ordinary people will bear the burden of austerity for years to come.

There is an ideological consensus on this mechanism across the continent irrespective of whether ‘conservatives’ or ‘social-democrats’, ‘pro-Europeans’ or ‘Euro-sceptics’ are in power.

The Greek proposals represented a challenge to this pro-austerity consensus, and so its chain reaction had to be avoided at any cost. The British demands, on the other hand, apply the same anti-labour recipe to the new conditions, the winners and losers are the same: nothing new under the sun.

After the summit affirming the British demands, many Eastern European leaders declared that they protected their workers, and that they had made sure that no discrimination could be levied against migrant labor from their region. I don’t know the parallel universe these leaders speak about, but it is certain that from now on any EU member state can deny social benefits to Eastern European workers. In other words, the anti-EU politicians of Poland or Hungary might believe that they helped Cameron smack Brussels in the face, but they definitely didn’t protect their own citizens.

Challengers of the consensus from Right and Left

The silver lining is that, in these conditions, the extreme right aiming at disintegration are doomed to fail; they make exploitation more visible, but they cannot destroy the EU.

If there is one factor that fuels the success of the radical Right and makes citizens vote for these parties, it is the recognition of the consensus discussed above. These parties – most prominently Marine Le Pen’s National Front – build their whole rhetoric around existential security and on re-establishing the regime of social services destroyed in previous decades. They wish to protect workers, though only if they are their own national workers – they would be as cruel as the current regime to foreigners. But the fact that they promise to reinstate the welfare state for natives makes them more sympathetic than their mainstream counterparts in the eyes of many voters.

Of course, this is all an illusion. Extreme right-wing politics and xenophobia make international solidarity impossible, and without this solidarity workers can’t fight for their own interests. This brand of politics divides the mass of workers into smaller national groups and by doing so delivers them to capital.

At the beginning of February, one of the most significant figures of the Greek crisis, former finance minister Yanis Varoufakis launched a new movement – DiEM25 – aimed at the extensive democratization of the EU. According to Varoufakis, a transparent and accountable EU could escape the spiral of perversely redistributive austerity and exclusionary nationalism and create a project based on justice, fair redistribution and solidarity. Truth be told, such a movement cannot be organized from above, from the Volksbuehne Theatre, but regardless of this, the observations of DiEM25 are very relevant. A real solution lies in a coalition of grassroots, local resistance movements, but at the moment this is nowhere in sight.

In the meantime, the European Union will not disintegrate, as many claim. It has merely entered a new stage of its development. It is a stage in which it is permissible to openly discriminate among different member states and citizens. A stage in which the exploitation of the periphery can be openly introduced into the founding documents of the multi-tier Europe, the first instance of which is the summit declaration concerning British demands. The EU will not disintegrate because it is very strongly integrated economically; today neither the center, nor the periphery can exist without the other. Today the term ‘national economy’ does not make any sense, does not have any meaning, and this makes disintegration (nearly) impossible. The silver lining is that, in these conditions, the extreme right aiming at disintegration are doomed to fail; they make exploitation more visible, but they cannot destroy the EU. Nonetheless, at some point somebody else will have to undertake the task of radically reforming the Union.

Special thanks to Joshua Wolens.