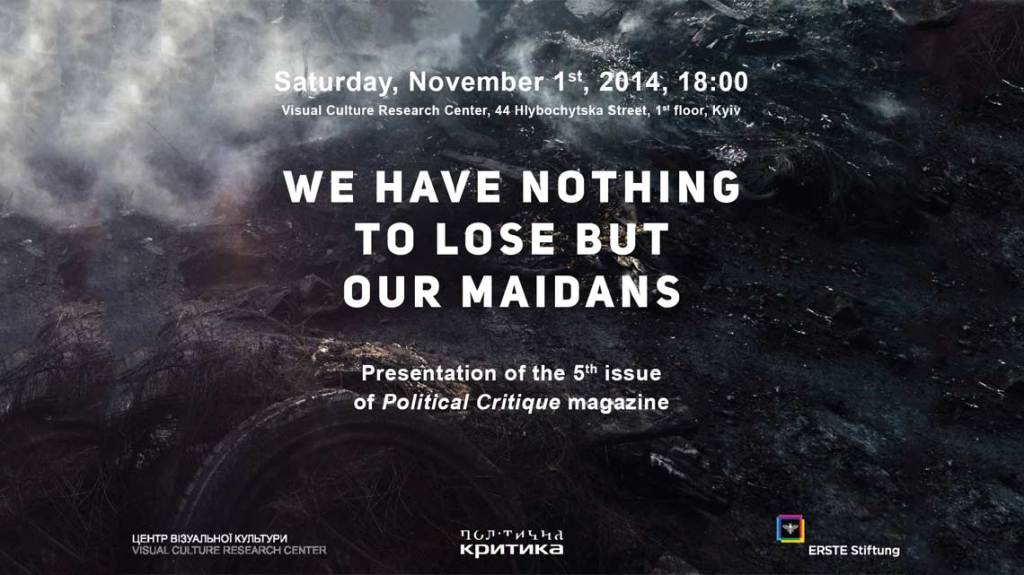 WE HAVE NOTHING TO LOSE
BUT OUR MAIDANS

Presentation of the 5th issue of Political Critique magazine

Visual Culture Research Center invites you to the presentation of the 5th issue of PoliticalCritique entitled “We Have Nothing To Lose But Our Maidans”, which will take place on Saturday, November 1st at 18:00.

In spite of all the written texts and produced images, we are still far from the complete understanding of the event of Maidan. The 5th issue of Political Critique represents the phenomenon of Maidan, which can be considered as a “visual revolution”, with its own visual means. During the events on Maidan political and revolutionary power of visual image was consistently realized. This edition of Political Critique analyses visual image as the revolutionary instrument on Maidan.

Besides texts the issue includes photos, many of which are being published for the first time, particularly the works by Oleksandr Burlaka, Maksym Dondyuk, Oleksandr Kozachenko, Yevgen Kotenko, Sasha Kurmaz, Viktor Marushchenko, Ivan Melnychuk, Sergiy Morgunov, Tomáš Rafa, Yulia Serdyukova, and Olga Yakymovych. The publication also contains artistic projects related to the issues of political violence: “Controlled incidents” by Mykyta Kadan and “Shelter” by Mykola Ridnyi. Textual part of the magazine consists of articles, which look into Maidan from political, social, visual, and urban perspectives.

The presentation of the issue will take place with the participation of its editors and authors:Oksana Briukhovetska, Vasyl Cherepanyn, Yustyna Kravchuk, Lesia Kulchynska, Oleksiy Radynski. Artists and photographers presented in the issue are also invited.