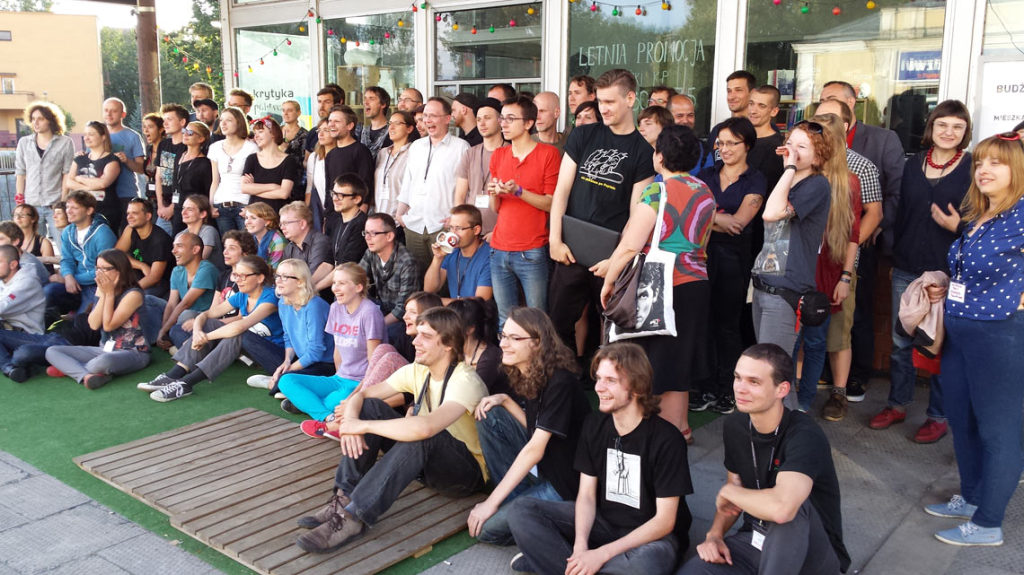 Meetings in Cieszyn every August have for the circles of Krytyka Polityczna (Political Critique) been a holiday, a feast, an occasion for summing up the year’s activities, and discussing plans for the future. For two years now, they have been a place of meeting friends. We have invited  our fellow organisations to Cieszyn so as to get to know one another, learn something from one another, and also give one another a high five, and talk together about changing the world for the better, for we know this is something we all share a keen interest in.

Krytyka Polityczna is a network of institutions and activists. We work for the change of the world into a fairer place. To people in Warsaw, we are an editing and publishing hub at Foksal Street, to those keeping track of the political debate in Poland we are its commentators on TV and radio as well as journalists of the online daily Dziennik Opinii, to various readerships we are a publishing house, to the residents of Cieszyn or Gdańsk we are social and cultural centres, to the residents of Łódź we are the organisers of the commemoration of the Revolution of 1905, in Gniezno we are known as fans of socially engaged cinema. For academia we are the hosts of seminars, lectures and conferences organised by the Institute for Advanced Study; among NGOs we are one of the larger, in Ukraine our name is Політична Критика, in Russia we publish the journal Политическая критика, and in international networking we are a little bit of everything: activists, journalists, academics, artists – and we have learnt that it takes a while to explain to others how this complex animal of Krytyka Polityczna works. For one another, for many organisations and circles in Poland and abroad, we are simply friends.

As Krytyka Polityczna we have been active since 2002. We started by publishing a quarterly, soon to find a group of people organising themselves around the magazine. In a few years the time was ripe for going professional and establishing other institutions. It has always been relations between individuals that held us together. Our term for it is “the making of social glue.” How do we go about it? Through common action for the change of political discourse and installing leftist thinking into social debate. Each action to effect this goal means hours of work as a team: research, preparations, sometimes heated debates, and finally realisation. Those hours spent together are to us equally important as our shared ideas. The patron of our Association, Polish philosopher Stanisław Brzozowski wrote: “What is not biography – is nothing at all.” It is doing things together that is our biography.

Krytyka Polityczna is a space where we bring together people, ideas and organisations. We are matchmakers for all sorts of people. We bring together academics and organisers, journalists and social activists, people fighting for minority rights and economists, artists from Częstochowa and social activists from Ostrowiec Świętokrzyski. All those people learn from one another, inspire, share their unique experiences. Sociologists and artists use different tools, but if they all sit down together to explain and demonstrate them, they may learn something that would not cross their minds if they remained shut, either group in its separate world. This sort of “matchmaking” makes a whole lot of people we meet get to know one another. That is why, among other things, we invite all our friends to Cieszyn each year.

Krytyka Polityczna is a place where we have found friends. To release 40 books, to invite people to 400 events, to publish 1,000 stories in the online daily every year is a lot of work, but also a cartload of fun and joy, which we share. We are happy whenever we can share our joy with our fellow organisations. Many among us have grown on Krytyka Polityczna and today they co-form social movements and NGOs. We continue to watch our respective progresses and try to support one another. We cooperate, we inspire, we motivate to action.

This year, the programme includes: discussions of the Polish political situation and the activist situation in Krytyka Polityczna; a presentation of the results of the Kiev workshop on Cultural journalism in a digital age; a series of group discussions on topics such as new political actors in Europe, migrants and refugees, fighting non-traditional authoritarian regimes, reproductive rights in Eastern Europe; the role and purpose of journalism; and the precariat. The programme also features a lecture by Michał Sutowski on solidarity in Europe.

Cieszyn Is Like Dogville: An interview with Anna Cieplak and Agnieszka Muras.