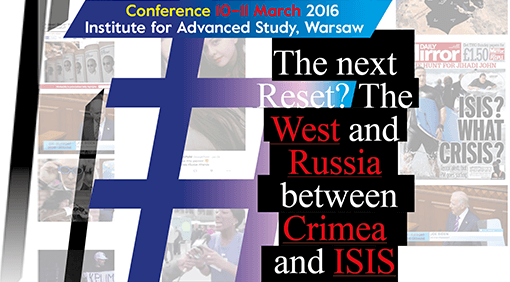 “Start to worry. Details to follow” – said an anecdotal Jewish telegram. The Balkans, Syria and Ukraine again become a playground for geopolitical confrontation of soft, hard and smart powers. Torn apart between big political interests, world’s public opinion’s mixed attitudes and people’s aspirations, societies try to find their way through a very complex puzzle. Does Russia have the ‘Grand Strategy’ here? Is there such thing as the political West, at all? And is there any option for people mostly involved – beyond the status quo or ‘Russia vs. West’ choice?

The languages of the conference will be Polish and English (simultaneous translation will be provided). The number of participants is limited. In case of reaching the limit – the registration will be closed.

You can apply for the conference via the ONLINE FORM.

18:00 Opening Session: Does Russia have the Great Masterplan? Putin’s PR and geopolitics

14:30–16:00 Session 3: Ukraine abandoned? Is the West going to trade Ukraine off for Russia’s support in the Middle East?

The languages of the conference will be Polish and English (simultaneous translation will be provided).

Ivan Krastev (Bulgaria) – political scientist and columnist for „New York Times“, chairman of the Centre for Liberal Strategies in Sophia, founding board member of the European Council on Foreign Relations and Permanent Fellow at the Institut of Human Sciences in Vienna; author of many books, including In Mistrust We Trust: Can Democracy Survive When We Don’t Trust Our Leaders?(2013) and Democracy Disrupted: The Politics of Global Protest (2014).

Peter Pomerantsev (UK, born in USSR) – writer, documentary filmmaker and former film producer at Russian television network TNT, columnist for „London Review of Books”, Senior Fellow at the Legatum Institute in London; author ofNothing is True and Everything is Possible: The Surreal Heart of the New Russia(2014).

Andrew Wilson (UK) – historian and political scientist, Professor in Ukrainian Studies at University College London and a Senior Policy Fellow at the European Council on Foreign Relations, author of many books, including The Ukrainians: Unexpected Nation (2000), Virtual Politics: Faking Democracy in the Post-Soviet World (2005) and Ukraine Crisis: What the West Needs to Know(2015).

Michal Vasečka (Slovakia) – political and social scientist, Assistant Professor at the Department of Sociology, Masaryk University in Brno, Member of the Council of Europe’s European Commission against Racism and Intolerance (ECRI).

Lina Khatib (UK) – research associate at the University of London’s School of Oriental and African Studies, Senior Research Associate with the Arab Reform Initiative, former director of the Carnegie Middle East Center in Beirut; co-editor of the “Middle East Journal of Culture and Communication”; author of many books, including Image Politics in the Middle East: The Role of the Visual in Political Struggle (2013).

Masha Gessen (Russia, USA) – writer, journalist, human rights and LGBT activist, columnist for “The New York Times”, “Slate” and many other newspapers; author of the books The Man Without a Face: The Unlikely Rise of Vladimir Putin (2012), Words Will Break Cement: The Passion of Pussy Riot(2014) and The Brothers: The Road to an American Tragedy (2015).

Socio-political crisis in Southern and Central Europe (including Balkans, Visegrad countries and Germany) which came about as a consequence of a mass inflow of war and climate refugees from the Middle East, as well as recent terrorist attacks on Paris, made the Middle East, especially Syrian and Iraqi territory occupied by so called Islamic State, the main focus for European foreign affairs. They also diminish the level of attention dedicated to the crisis and ‘hybrid war’ inspired by Russia in Eastern Ukraine. On the other hand, Russia’s military involvement in Syria and its support for President Assad make this country a necessary factor to be taken into account in all strategic solutions regarding ISIS and mass exodus of asylum seekers in Europe.

All these processes create an extremely complicated strategic puzzle, consisting of different regions (Donbas, Crimea, Middle East, Central Europe, and the Balkans) and often contradictory political, social, and economic interests, determining the fate of refugees, cohesion and solidarity in Europe, as well as geopolitical influences of different powers. Events in distant Syria are observed with close attention, especially in Central Europe and in the Balkans, where different dimensions of this puzzle interact and intertwine: Russian interests and involvement within their neighbour’s borders and in the middle-eastern war zone, which produces the mass outflow of people to Europe; conjunction between events there and the inflow of refugees seeking asylum; possible trade-off between the West and Russia, exchanging Western acceptance for the status quo in Ukraine and for Russia’s help for Syrian government in fighting ISIS. In Warsaw, where both the question of refugees and Russian activities in Ukraine became a matter of huge controversy (in a slightly different manner than in the Balkans or Hungary, which do not oppose Russia in Ukraine), we’re going to gather experts, commentators and civic activists involved in the Middle-Eastern, Ukrainian and Balkan affairs – to discuss and bring about ‘the big picture’ where analytical and practical experience can serve to ‘map’ an extremely vague territory in a coherent way.